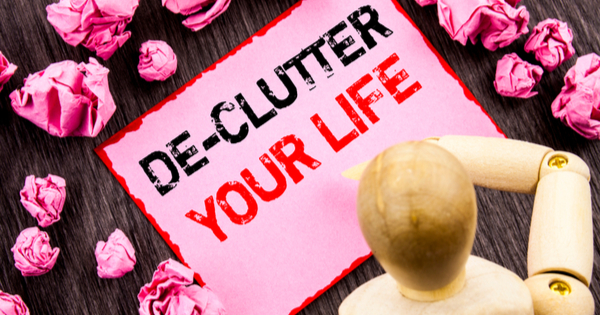 I hope you will remove the clutter that prevents more from coming into your life.

As I ever so slowly continue to unpack the 200+ boxes from the recent move into my new home, I am purging, tossing and recycling like a mad-woman…not crazy-mad (although some would argue that) but a MAD WOMAN. As in, I am furious with myself for accumulating so much damn stuff over the years, never mind holding on to it for so long.

Upon reflection, here’s what I’m noticing…

The actual decisions as to what to keep and what to toss are easy. As I enter my sixth decade on the planet, I know what I want, need and love. As Marie Kondo would say, I know perfectly well what “sparks joy.”

Making the decision is simple. Executing the decision is fast (put the item in the recycling bin, the thrift store box, the garbage or place it where it needs to go in the house). Where I am struggling is dealing with the psychological fall-out of purging all the old files in my office.

For it’s not just papers I’m getting rid of. I am also having to let go of an awful lot of goals, hopes and expectations I had set for myself as a writer. Not that I’m dying…I’m sure I still have plenty of time left to write. But I AM having to face the fact that despite my best intentions, I have not achieved anywhere near what I had hoped to, in the writing-department, by this point in my life.

Perhaps even more disconcerting is the fact that it’s not like I’ve been sitting around for the past twenty years, thinking about writing instead of actually writing (like the old days, before my husband’s sudden death when we were both 32 and I got the wake-up call of all wake-up calls about the importance of working towards our dreams instead of just talking about them).

No. I have been writing…like a mad-woman. And yet I have not accomplished anywhere near what I had set out to. This is an extremely uncomfortable conclusion to arrive at.

And yet, I think it’s healthy. As such, I am trying to embrace this discomfort (which is rather like hugging a cactus) instead of denying it or running from it.

Because the fact of the matter is: time IS passing very quickly. And I’m hoping that the sooner I can shed that which I no longer want or need (or is no longer serving me), the more time and energy I will have to focus on what really matters to me—the relationships, projects, causes & activities—in the years that remains.

Perhaps this is what happens in our 50’s? We reach some sort of…point of reckoning?

And here comes the new…

Of course, now that I am shedding stuff left, right & center, this is creating a vacuum in which to receive new stuff—but believe me, I am being VERY selective as to what new items make their way into my home and life.

Case in point is a BBQ.

I left my old, rusted, beast of a BBQ behind at the house I sold 18 months ago, so was going to have to get a new one. But I looked out my living room window a few weeks ago and low and behold, right across the street a BBQ had appeared on the curb overnight—with a big FREE sign stuck to it.

I raced out my front door, dashed across the street and had just opened the lid to inspect inside when my neighbor came out her front door and greeted me with a big smile.

Beaming, I rolled it across the street, parked it in my backyard and have been using it almost daily ever since.

Interestingly, shortly after beating myself up about not getting enough writing projects completed yet, I heard on the radio about a concept called “Slow Motion Multi-Tasking.” It is a creative process utilized by many geniuses (such as Einstein).

Basically, Slow Motion Multi-Tasking refers to the practice of working for a significant period of time on a single project and then putting it aside, working on another large project then putting that aside and returning to the first project with a fresh perspective. I have been using this strategy for years with multiple projects and I DO see the benefit. But sometimes I worry that nothing of significance will ever get finished.

Apparently, however, since I am in good company with the practice of Slow Motion Multi-Tasking, I shall continue to persevere with patience and passion…rather like I am with the unpacking of boxes and purging of old stuff!