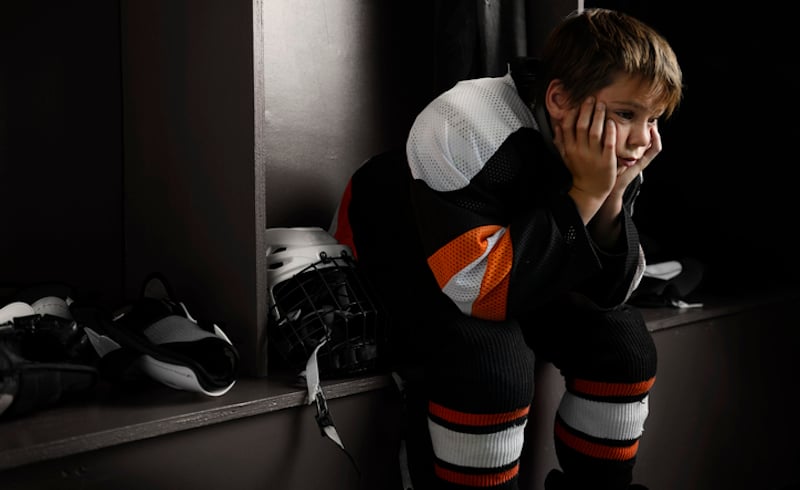 Sports are great, but we shouldn’t pressure boys to play just to prove their masculinity.

I love sports and athletics. I work out every day and I coach high school athletics. I played sports growing and still try to participate in the occasional men’s league when I can (even though the ole jump shot isn’t what it used to be). It is part of my DNA and helps me do well in other areas of my life: like being a father. I love my family more than anything and want the best for them, day in and day out. So with this all being said as a man who is a father of one boy and another one on the way, I naturally have many hopes and dreams for these future young men. With my natural affinity for the sporting side of life, one could assume that I hope for them to become fierce competitors with a high athletic IQ. One could assume that I hope can go cheer for them to get the win and have all types of athletic prowess. In all honesty, this could be further from the truth.

I have met many fathers who want their boys to follow in their athletic footsteps. Either to potentially fill the void they were not able to fill when it was their time to shine or to continue the legacy they started years beforehand. It seems that some men need their boys to support their ego by playing sports in order to maintain some kind of masculinity. Now I am not saying this is wrong as everyone has a right to choose, but I do think this puts undue pressure on these future young men.

In my observations, this pressure to follow in a father’s athletic footsteps (or take the path that the father didn’t complete) creates an expectation that sets a young man up for failure. It sets them up for failure because a lot of their young persona then rides on these created athletic pursuits. Either to follow the road that was already once traveled or to complete the journey that was stopped early. So when these young men do fail or do not perform up to par in a game or practice, instead of it being a lesson about life and learning from mistakes (which can be taught easily through sports), it becomes self-deprecating and diminishes self-esteem because it appears that they feel that they haven’t only let their team or themselves down, but their father down.

I have heard conversations from this type of father-son dynamic after the son did perform well in an athletic event. The conversations seem to consistently not be around support and encouragement, but more around shame and the need to work harder. In turn, I have seen these young men struggle emotionally when faced with pressure situations and performing at a high level. They are always fighting back tears when something doesn’t go well and they will often look into the crowd for the approval of their father (when they should be looking at their coach or teammates). I don’t think this serves our boys well in their development. It actually may hurt them and their self-perception.

I think it hurts them because they aren’t able to formulate their own identity through sports. It is like they already have one planned out for them and if they do something different these young men are no being characteristic of who they are supposed to be. It is like an arranged marriage that doesn’t work out. I think with this continued pressure for some young men to play sports, not for themselves it can carry into adulthood and make them unsure, angry, and often depressed because they never got to explore who they really are during those vital years. They never got to explore because they were always being pressure to do something they didn’t really want to do and be someone that they weren’t. I believe this, in turn, can hurt their potential careers, relationships, and overall mental health.

So instead of forcing our boys, I think our boys need to choose whether to play sports or not. Is it really for our sons to have them participate in sports unless they want to themselves? I think the unfortunate truth in some circumstances is that some fathers want their sons to participate for themselves and not for their boys. This takes the fun out of the game and puts too much pressure on the developing minds of these young men. If they aren’t having fun and learning lessons from the game they are playing what purpose does it really serve? We should enjoy watching our children play sports not live for them to win another game.

Not all fathers put this pressure on their sons. I want to make that clear that I am obviously talking about a specific group. There are many fathers around that carry this same philosophy and in my experience I see their sons perform better athletically and handle themselves with more certainty and calmness on a daily basis. This isn’t an exact science, but from my empirical observations, one could assume that playing more of the supportive role as the parent helps develop a more balanced young man as opposed to being the one with the high-performance expectations.

If our sons don’t want to play catch with a football, it is not a blow to an ego (father or son!). The boy may just have some other interest that should be pursued with the same energy and interest as sports. Let’s not raise them to think that their masculinity can only be found on the court or playing field but in other areas of life. However, if they choose to play sports, cheer them on with the support and love that they deserve. This will help them learn from the lessons sports can teach as opposed to being brought down from them. It is them hoped that this approach will help create a well-rounded man that appreciates a variety of activities both the sporting and non-sporting variety.
—

Nick Pocius teaches high school special education and coaches basketball and track. He is the father of one boy with another on the way. Nick lives with his wife and growing family in Rochester, MN.

Parents do tend to live vicariously through their children with sports. As a coach for many years in multiple sports raising my children its a tough balance understanding limits with your children but also knowing where to encourage and support their strenths where ever they may ly. It s more than about masculinity, sports provides children with good experience that parallels life challenges. Read on-
– See more at: http://parentingforsingles.blogspot.com/2012/02/parents-sports-help-children-prepare.html#sthash.o99nKlcH.dpuf

Just because a boy chooses to not participate in a sport doesn’t mean, as so many claim, that he’s somehow deficient. Were the individual men I cited above wimps?

I challenge the assertion that every boy must participate in a sport. I believe every boy who wants to should be given every opportunity to do so. But, apparently, when it comes to this issue, respecting one’s preferences goes only one way. I guess since nonathletic boys are such abnormal, pathetic, effeminate losers, they deserve to be marginalized and bullied. Buncha sissies!

Thanks for the reply. I am a high school coach and have been for 13 years. I coach boys basketball and track and I am very familiar with this issue (which is why I wrote about it!). I love sports, but as I stated in the article I do not believe that every young man needs to play a sport. Yes many lessons can be learned through athletics, but for boys who don’t want to participate in sports they can learn these lessons in other areas of life. It is up to them to choose and as fathers and/or male… Read more »

My brother was a good baseball player in elementary school until I was born (we’re 13 years apart), discovered that my father wasn’t his father, and then he became a hippie, got married and got divorced. I became bookish and had zero interest in sports. My parents gave up on trying to raise me. Since I spent my allowance on books instead of drugs, they let me be. My nephew started playing baseball when he was five-years-old, played through college, and went to a summer try out in Texas to play 500 games before being cut from the top 50.… Read more »

I was, am, will always be bookish. So much so that my parents made me join a rugby club when I was 11. And to begin with I resented the hell out of them. Who makes a child play sports just because they read a lot? Thing of it is, I grew to love it and as I say, I’m still bookish today. And even though I played rugby every Sunday? I used to hate PhysEd at school. I still to this day disagree with my parents’ reasoning. And playing a sport where there’s a tendency towards hyper-masculinity while myself… Read more »

Thank you very much for the article, Nick. I really appreciate it. I never had an interest in sports when I was a boy and never developed an interest as a young man. Yet today I’m not a sedentary guy. I’ve spent a small fortune on a succession of personal trainers at a local health club where I’ve been working on a bodybuilding program for about five years. (Needless to say, I didn’t drive my previous trainers away. LOL You know how it is. They made career changes of one kind or another. It had nothing to do with me.)… Read more »

FacebookTweetPinEmail2Shares2
wpDiscuz
7
0
Would love your thoughts, please comment.x
()
x
| Reply
Share this ArticleLike this article? Email it to a friend!
Email sent!