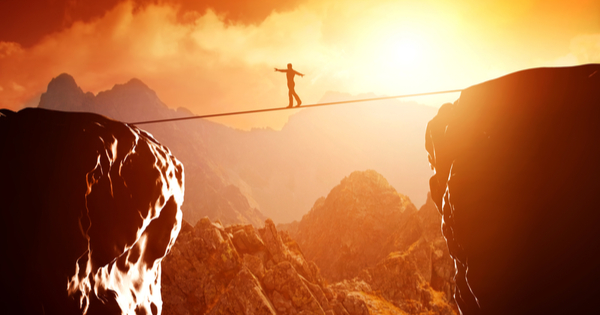 In light of Kobe Bryant’s death on January 25, 2020 from a helicopter tragedy, I am compelled to write about the risk profile that many of our heroes and industry titans must face and master on the path to success.

Actor Will Smith said as much in a YouTube interview:

In Bryant’s case, CNN reported minutes before the crash occurred, the pilot of the doomed helicopter had requested special permission to continue flying despite foggy weather conditions. The last thing heard from the pilot to air traffic control was that he was trying to avoid a cloud layer. It didn’t work.

Why had the pilot requested special visual flight rules clearance—which would allow a pilot to fly during poorer weather conditions than those allowed for normal visual flight rules? We don’t know what happened for sure on that flight, but it’s safe to say that risks were taken with the weather conditions—risks that may not have been taken under different circumstances, or with different passengers on board.

The truth is we will never know and the world is left mourning the loss of nine souls which left us too soon.

The journey to success is lonely. Those who have made it have learned to listen to their own inner voice rather than the voices on the sidelines telling them to quit or their goals are too lofty. This is a blessing and a curse, especially when it’s the inner voice that got you to the mountaintop.

It’s easy to think of other successful risk-takers whose stories ended prematurely. A recent example was pro racecar driver Jessi Combs, who was dubbed “the fastest woman on four wheels.” At age 39, Combs died trying to best her own record speed of 398 miles per hour, which she had recorded in 2013. She crashed in Oregon’s Alvord Desert.

Apple’s co-founder Steve Jobs was known to push the envelope. He had been pushing the envelope his whole life. He tried to do the same thing with his cancer treatment and it didn’t work out. Live Science published a piece that explored, Did Alternative Medicine Kill Steve Jobs? The article notes, Jobs delayed the recommended medical treatment for pancreatic cancer for nine months. He attempted to treat his condition through alternative medicine and eating a special diet.

It required surgically removing the tumor.

Not all risk-taking results in the uber-successful losing their life, but other things may be lost by “going all in.” Jim Carrey described “losing himself” while method acting as Andy Kaufman for the film “Man on the Moon.” An article by Josh Rottenberg for the Los Angeles Times described Carrey “plunging himself so deeply into the role that he was never the same again.”

Other successful risk-takers (who are still alive connected to their own identities, and continuing to reap big rewards from their risk-taking) are founder of Virgin Airlines Richard Branson, whose risk-taking exploits Alison Coleman writing for Forbes called “the stuff of legend.”

“…as I’ve always said, no one ever reached for the stars from the comfort of their couch!” Branson said in Coleman’s Forbes interview.

You don’t have to be famous to be a risk-taker to fit this profile. I know that even in my own business, I have practiced “the success delusion.” There have been many times when I have had to convince myself that things are better than they really are in an effort to keep moving forward.

One of the reasons we love our heroes is because they step into the unknown and gamble. We, as mere mortals, marvel at it. I know that it isn’t that these champions are free from fear but that they are not paralyzed by it. Every person on that helicopter on Jan. 26 was a hero and a risk taker. May we celebrate their lives and may their legacy inspire every one of us.

What do you think—are all successful people inherently a little delusional?

My name is Paul Argueta. I have been featured on the Inc 5000 list twice. I own a real estate brokerage and employ over 100 independent contractors as real estate agents. I am a huge sports nut and decided that I would find a way to combine sports with real estate. These days I assist Pro Athletes during their relocation process and even E-Sports gamers. I am happily married with 5 children. Balancing the pursuit of success while being a present husband and father is a challenge and my passion.