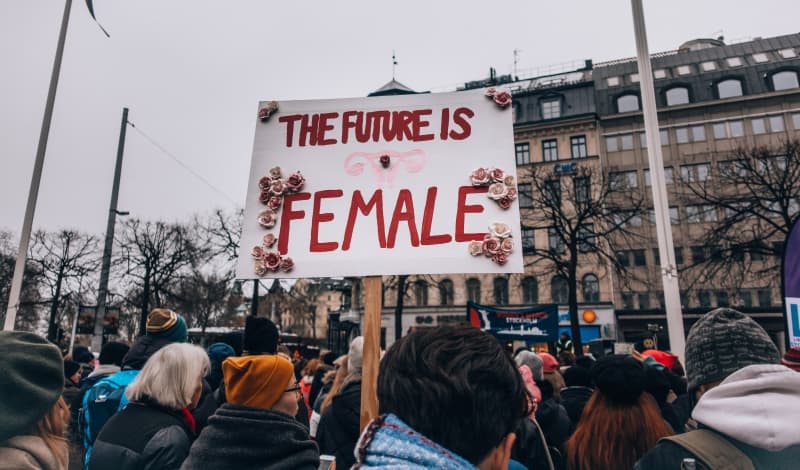 The recent reboot of Sabrina on Netflix is amazing. About one year ago, I was terribly sick at home for four days and I binged the new Netflix reboot of Sabrina entitled, Chilling Adventures of Sabrina. I am absolutely blown away and empowered by how strongly feminist this show is. Sabrina is the feminist role model we all need; especially for kids and young adults.

**WARNING: SPOILERS BELOW IF YOU HAVEN’T ALREADY WATCHED THE NEW SEASON**

A few weeks ago, Netflix released part three of the series and I squealed with joy to once more delve into the fantastical, dark, and feminist adventures of Sabrina. The thing I love about the show is its strong connections to the political and social commentary of what it’s like to be a woman in today’s world. Sabrina and the other female cast members are so empowered, unapologetic, and for lack of a better word, bad-ass!

The series starts with the fallout from season 2 as the Church of Night and the Academy of Unseen Arts is no longer under the strict patriarchal rule of High Priest/Dean Faustus Blackwood. The remaining students from the academy are staying at the Spellman mansion and they inquire with Zelda Spellman (affectionately known as Auntie Zee by Sabrina) on who the new director of the school will be. She answers quite confidently in Part 3, Episode 1, “What a question. I will of course, directrix.”

While Auntie Zee is busy running an academy, Sabrina is busy shifting the paradigm of the damsel in distress. Even though her warlock boyfriend Nick Scratch betrayed her by getting close to her at the request of the Dark Lord and Sabrina’s true father, she is choosing to rescue him from the depths of Hell.

Sabrina, Theo, Harvey, and Roz go to Hell together and ultimately must make a deal with Madam Satan, Lilith. Lilith has now made herself queen of Hell while the Dark Lord has been away cast into the body and mind of warlock Nick Scratch. Sabrina and friends sit at the dinner table with Lilith and Sabrina assertively demands, “What I want is Nick out of here and Jesse Putnam too. I’m not even going to ask if you’re responsible for him being here because who else would it be.”

Lilith graciously agrees if Sabrina can help her with her legitimacy claim to the throne. As a metaphor to our world, the male demons of Hell are not accepting Lilith’s claim to the throne because she’s doesn’t have the moniker of “Morningstar.” Sabrina must crown Lilith as queen publicly to legitimize her claim to the rest of Hell.

Sabrina legitimizes her throne, but Beezlebub roars with dissent, “This is treason! Heresy! Lilith is a concubine, not a queen. We do not recognize her. She was Lucifer’s hoar…..”

Lilith inquires, “And who do you propose would rule?”

Sabrina is convinced by the Dark Lord to claim her birthright to become Queen. She is then challenged by Prince Caliban for her throne and must go on a quest to track down three magical items to beat Caliban for the throne.

Not only does the show empower women, but it also challenges the concepts of high school stereotypes and personas. I think there are deeply held values that if you are a nerd, you can’t be good at sports. Or if you are a cheerleader, you can’t also be in the math club. Sabrina is not only the Queen of Hell, but she’s also a cheerleader along with one of her best friends Roz. Roz is a cheerleader, but also plays guitar and sings in a band called the Fright Club along with her friend Theo and boyfriend Harvey.

As a music lover, I can’t help but notice the great songs they chose to cover in the show. We see a resurgence of popular cover songs covered by the Fright Club including: “My Sharona” by the Knack, “It’s Tricky” by Run-D.M.C., “Teenage Dirtbag” by Wheatus, and the ultimate cheerleader anthem, “Hey Mickey” by Toni Basil. It makes me excited that these songs will reach a whole new generation due to the audience of this show.

As the show progresses, we see Sabrina grappling with her consciousness and her kind nature in her new role as Queen of Hell by giving mercy to her first soul and sending the elderly chess player to heaven instead of Hell. Her naivety is taken advantage of by ice cream man Jimmy Platt who formerly had a deal with the Dark Lord. She overcomes the obstacles thrown her way and really owns her power when she finally captures the vile murderer Jimmy Platt.

“My deal was with the Dark Lord,” says Platt.

“Yes, but Hell’s under new management now. MINE! You’re going to pay for your crimes Mr. Platt for a very long time,” says Sabrina in a ruthless, cold, and vindicated voice.

As Sabrina brings Platt to Hell, she is challenged by Beezlebub, “I’ll speak however I please. You forget yourself Beelzebub. I’m your sovereign and the reformation of Hell starts now.”

Sabrina visits her father in warlock Nick Scratch’s body and the Dark Lord remarks, “Something’s different about you.”

Sabrina, “I dragged my first sole to Hell today.”

The Dark Lord, “And how did that make you feel? All that power? All that rage?”

Sabrina looks in his eyes with an IDGAF stare “Like I’m capable of anything.”

We also see the characters who are a bit more shy come out of their shells more and get their slice of happiness. Non-binary Theo Putnam who started the series as identifying as Susie Putnam. Later, Susie came out as a transgender male character and changed his name to Theo to embrace this new identity. He asks out new student Robin, they start dating, and eventually become a couple.

We see Hilda Spellman who is constantly berated and belittled by sister Zelda, stand up for herself!

Zelda, “You are a Spellman, you have a duty.”

Hilda, “I have a duty to myself to be happy.

Zelda, “We’ll talk about this tonight.”

Hilda, “No we won’t because I’m going to the carnival tonight with Dr. C., so you can cook your own dinner.”

The show also embraces and re-frames sex positivity for women. Roz and Harvey as a teenage couple in high school are approaching that milestone of having sex for the first time. Roz is not a virgin, but Harvey is. To have a woman, especially a young woman, break free of her proverbial chastity belt is still considered taboo in many parts of the world. Roz is even the one to initiate the conversation:

Roz, “… but guess what? He’s going to Las Vegas for a church convention… for an entire week, which means we could spend the whole night together at my house. I think we’re ready.”

Later on in one of my favorite scenes, we see Sabrina continue on her Regalia quest to win the crown against Caliban; she must find 30 pieces of silver from Judas. As advised by Judas, she must hunt down the crypt of the first vampire Vlad to find the buried silver.

Vlad is awakened as Sabrina grabs the silver from the crypt. Vlad, “Listen to my voice. Hear my words. Your thoughts and your will belong to me and only me now…. What’s your name girl?

Vlad, “You are very beautiful Sabrina. Say thank you.

Vlad, “You are going to let me drink your blood and feast on your flesh, aren’t you?”

Vlad, “That’s a good girl.” Your neck is so very, very…(bites into Sabrina’s neck)

Vlad howls in pain. “Your blood burns. Are you a celestial?”

Sabrina, “My father was an angel. I have his blood. Also, CONSENT! IT’S REAL!”

*THE AUDIENCE ROARS WITH APPLAUSE EVERYWHERE*

Sabrina also gets her revenge against Prince Caliban who glamoured himself as Judas. “Nice try Caliban, but not I’m an idiot. You’re wearing a glamour and I won’t be making the same mistake twice.”

Caliban, “How can this be? How did you know?”

Sabrina, “Because I’m one step ahead of you and twice the monarch you could ever be.”

Sabrina challenges the concept you can have your cake and eat it too as Sabrina decides to keep the present and future versions of herself to not only be a teenage cheerleader, but also the Queen of Hell. Sabrina is then prepared for her coronation as queen by Lilith.

Lilith to Sabrina as she morphs her into a fierce AF Marie Antoinette replica with an epic speech, “Every queen must be made battle-ready. Every girl must prepare for war. Guard your loins. Let nothing touch. Let no man hold power over you. And when they cry out for mercy, the Morningstar must show them none. Your crown and throne await you, First Lady of Pandemonium, Maiden of Shadows, behold the Queen, Sabrina Morningstar.”