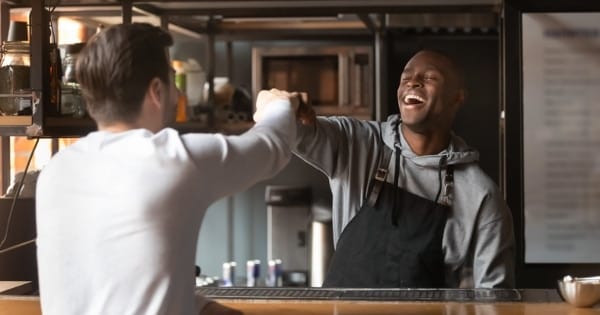 —
I was at a transition in my life where things were falling apart and coming back together. I needed to retreat, regroup and try something different because not everything I had done felt like it was working. I needed a win.

I decided to go to an open house for a coffee company and apply for a job. I applied in my field but through multiple interviews, they sold me that before I could move up through the company that I would have to start as a Barista. They said everyone had to learn their way through the positions before getting into headquarters.

The lure of free coffee, as a coffee lover, made me float into training each day. We could drink whatever we made and we received free coffee while at the training location. By the time I returned home each day, I was buzzing. I felt like I might have been radioactively glowing.

I learned how to make every coffee drink, froth milk, pull espresso and create flavored lattes as well as the history of coffee and interesting tidbits of information. I passed my training test and was assigned my coffee home.

Each day, I danced around the counter moving from one side to the other and grabbing the handles of the espresso machine as if we were old friends. I poured coffee during rushes, grabbed food, made smoothies and then rushed back to the register to take the customer’s cash and thank them with a smile. It was exhilarating especially when my skill caught up to my enthusiasm. I quickly climbed the ranks to the next level to be a supervisor, which required more dancing while also training, coaching and managing others.

During that time, I discovered there was much more to making coffee than was created just by running hot water through coffee beans.

We had regulars who came to our location every single day, mostly for the coffee but also to see us because we made their drink just right or made them smile. I would remember what was going on in their life and ask questions, then genuinely listen before dispensing advice and handing them a drink that made them close their eyes with delight.

Everyone who came through had a story.

One was an exasperated teacher who was wary that he couldn’t get through to his students because they were more focused on fighting than learning. He was at a crossroads if his future would remain in the classroom or re-educate himself to higher education to make life easier. It was a tough decision because he didn’t want to abandon the kids. I poured him an espresso that transported him to wherever he needed to go to figure out his next moves and sacrifices.

There was a man who was retiring from a job he had worked most of his adult life. He was slowly trying to phase himself out of work and wondering what the next chapter of his life would look like while also welcoming grandchildren into his life. He smiled every day that he saw us as he filled us in and showed us pictures or discussed his quandary of when to cut off his working life.

We met people attending an AA meeting who stopped in for their coffee before going in to receive support for their sobriety. They filled us in on what was going on in their life, shared laughs with us and looked forward to seeing us the next day, as we became part of their ritual of self-preservation.

There was the day a woman came in for a drink and disclosed to me that she was stopping in for a coffee drink before she was putting her mother in hospice care because her mother was dying. I could see the tears forming in her eyes before she blinked them back. I think I made the best drink I could possibly make that day. I cupped her hand with reassurance as she retrieved her drink. She gave me a half-smile and a nod of her head.

During one shift, I noticed a man sitting at a table for hours on his computer. He never ordered anything. I walked past him several times and noticed him staring intently, but looking defeated. In the last hour before we closed, I walked over to him with a cup of coffee and a croissant. I said, “I noticed you didn’t get anything to eat or drink.”

He looked startled and began to explain, “I’m sorry. I just needed to use the wi-fi. I was recently unemployed and I am looking for a job.”

I shook my head. I said, “It’s ok. I just wanted to give you something to eat and some coffee on me. Let me know if you need anything.”

He looked at me in shock at first but nodded slowly. Before he left, he came over to me and whispered, “thank you.” I wish there was a fairytale ending that he got a job, but I will never know.

Occasionally, you get a mean or sour person who takes out something invisible on you as if you were the thing that ruined his or her day, but I just made their drink right and hoped that is the one bright spot for them.

A co-worker got mad when someone took his anger out on her. After a couple of hours, I walked over to her and asked, “Are you going to let that person ruin your whole day? Or, are you just going to let them ruin their own?”

There are so many heartwarming and heartbreaking stories I could tell that I heard during my time making coffee for people. I was just a moment in their day, but they often shared a glimpse into their mind, soul and life. Before they would leave, their response was often, “are you here tomorrow?”

I thought the skill I would gain was making coffee drinks and I was mostly thinking about my own benefit. The skill I ultimately learned was how to be of service in a compassionate way and seeing the humanity of someone in the moment they are allowed to relax.