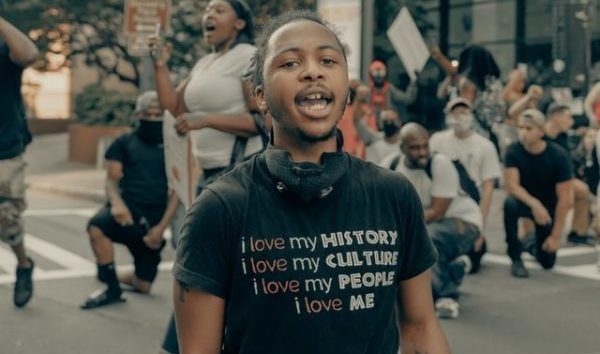 “Every human society must justify its inequalities: unless reasons for them are found, the whole political and social edifice stands in danger of collapse. Every epoch therefore develops a range of contradictory discourses and ideologies for the purpose of legitimizing the inequality that already exists or that people believe should exist.”

“I’m not black but there’s a whole lotta times I wish I could say I’m not white.”

In “Discipline and Punish: The Birth of the Prison” Michel Foucault discusses how public torture and executions of criminals were used as methods to control populations up through the 18th century. But this “theater of punishment” was later found to be inhumane and ultimately public executions were rendered private. The general public could be controlled through more civilized means.

This is why the murder of George Floyd represents a tipping point. Our society lost its appetite for public executions many generations ago and Derek Chauvin’s gaze into the camera — at us — as he slowly and painfully executes a helpless, pleading, handcuffed man is absolutely horrific. It’s fucking barbaric.

This is the nadir of uncivilization.

According to the NCBI, victims of police shootings were “disproportionately black (32%) with a fatality rate 2.8 times higher among blacks than whites. Most victims were reported to be armed (83%); however, black victims were more likely to be unarmed (14.8%) than white (9.4%) or Hispanic (5.8%) victims.”

Watching a lion pounce on a gazelle on the savannah makes sense to our brains; watching Derek Chauvin torture George Floyd to death does not. It is worse than a return to cannibalism or human sacrifice or the experiments conducted on Jews in Nazi concentration camps; it displays an egregious and unfathomable lust for power, somehow even beyond the new normal of acceptable sociopathic narcissism to which we have become accustomed, beyond sadism, beyond evil.

2. One president, two-dozen actors, one-hundred musicians and five-hundred athletes does not excuse the lack of opportunities that the other 47 million Black Americans face on a daily basis.

We need a massive paradigm shift, we need to transform the way we think about minorities, we need a reconfiguration of race relations in this country, and we need it today.

We don’t need liberals trying to assuage our guilt on social media. At best it is patronizing and unhelpful. At worst it is gross and disrespectful.

We can start with every business and university in America pledging to have Black Americans represented at every stratum of our society fairly and paid equally.

The race war is a subset of the class war. The lower classes are tired of being oppressed and exploited, of having no real opportunities other than the military or ending up in jail (after their dreams of becoming professional athletes or musicians die) or working McJobs for unlivable wages.

How is change possible when you have an economic system based on maximizing profit by continuously oppressing and exploiting the lower classes and even tricking them into voting against their own interests?

Why didn’t Laura Ingraham add the N-word to the end of her already vile utterance to Lebron James, “Shut up and dribble”?

Because it would have been redundant. It was tacitly already there.

3. What would forgiveness for slavery resemble?

When I was in Spain in 1987 I met two German students and immediately noticed how their heads bowed slightly when I told them my name was Israel. They were ashamed for what their people had done to mine fifty years prior. When was the last time you saw a white American be ashamed for slavery? Or for the Native American genocide?

One of my favorite people on earth is Marianne Williamson who during her presidential campaign proposed reparations for slavery. However, reparations are unilateral and what is needed is a bilateral solution.

Forgiveness starts with two. One party says, “I’m so sorry. Please forgive me” and the other party replies “I forgive you.” And then we move forward together. The past is the past.

White Americans must understand that unless we take responsibility for what our ancestors did, nothing is going to change. We have to stop making excuses and ask for forgiveness. And then we have to ask what we can do to make it right. Why isn’t anyone having this conversation? I don’t see anyone offering viable solutions to avert the impending race war — do you? If we don’t find a solution then blacks and whites in America are going to end up like the Palestinians and Israelis.

4. Why all police chiefs should be female

Pilots must go through consistent psychological testing to ensure that they will not fly their planes into mountains that day. Why doesn’t every police officer have to take an oath not to shoot someone in the back every time they gear up?

Nietzsche called men “the barren animal” and Camille Paglia wrote, “There is no female Mozart because there is no female Jack the Ripper.” Men do not know what it is like to give life. Yeah, we have written some nice symphonies and built some lovely cities but exerting power by destroying life is a unique talent that we possess.

Santa Monica Police Chief Cynthia Renaud had a town hall meeting via Zoom where she walked citizens through her decision-making process hour by hour from 11pm on Saturday evening through the protests, looting and rioting that ensued on May 31st. On the one hand, she could have decided to try to save a handful of businesses on 4th street by authorizing officers to shoot the looters, which would have obviously resulted in innumerable deaths and probably a civil war. Allow me to clarify in case you missed what was at stake: this highly trained professional made strategic calculations based on ever-changing intel and no blood was shed during an extremely incendiary situation.

Nobody died in downtown Santa Monica on May 31st and 64,000 ignoramuses (mostly my rich, entitled, white-privileged neighbors) signed a petition to remove Chief Renaud for not saving those businesses. Chief Renaud single-handedly averted a war and this is how she is rewarded. Every person who signed that petition is a racist. The next time the looters may not be satisfied with sneakers and handbags; the next time they might want to roll 64,000 white heads down Colorado Avenue and off of the Santa Monica Pier.

“The end of apartheid should have been a fucking bloodbath by any metric in human history and it wasn’t. The only reason it wasn’t was because Desmond Tutu and Mandela and all these guys figured out that if a system is corrupt then the people who adhere to the system and are incentivized by that system are not criminals. They are victims. The system itself must be tried.” ~ Dave Chappelle, “Bird Revelation”

Mister Chappelle is correct. And yet, who is out there trying to create equitable new systems that engender a just and fair society? The only ones I hear are Alexandria Ocasio-Cortez, her squad, and a few other progressives who are repeatedly branded as “radical leftists” by the racist pigs.

Since when is it radical to want peace?

Anyone who is trying to “conserve” the white male hegemony sucks as a human being and doesn’t understand either civilization or evolution.

And if you are rankled by #WhitePeopleSuck how about #Timetoshutthefuckupandlisten ?

Read “The New Jim Crow: Mass Incarceration in the Age of Colorblindness” by Michelle Alexander, “A People’s History of the United States” by Howard Zinn, “Lies My Teacher Told Me: Everything Your American History Textbook Got Wrong” by James Loewen as well as countless other books, watch Ava DuVernay’s “13th” and countless other movies on the black experience in America, and then trace the voices that led the French Revolution. Discern what they were asking for and how many heads had to roll through Place de la Concorde for systemic changes to be made.

And then ask yourself what you’re doing to avert the impending American Revolution.

Photo by Clay Banks on Unsplash

I thoroughly enjoyed this article! I also noticed you graduated from UPenn! I’m also a Philly native. Looking forward to reading more of your work!

Thank you for your kind words, Paul! I really appreciate it!

Facebook10Tweet6PinEmail1Shares17
wpDiscuz
2
0
Would love your thoughts, please comment.x
()
x
| Reply
Share this ArticleLike this article? Email it to a friend!
Email sent!