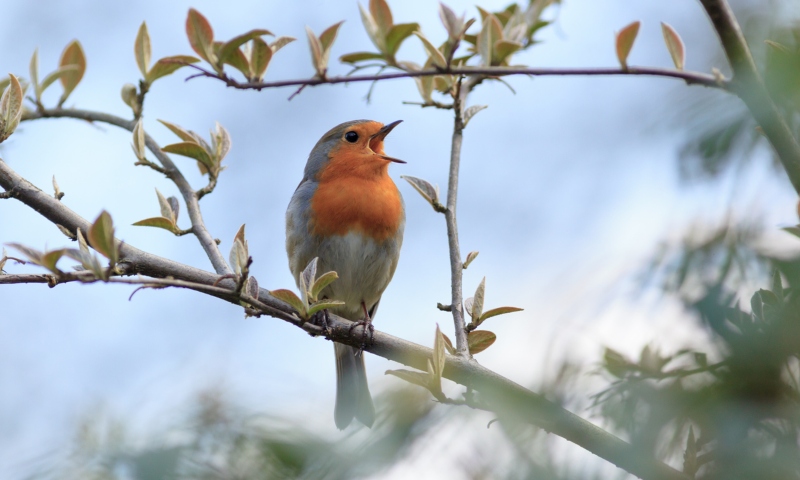 What does a biodiversity crisis sound like? You may need to strain your ears to hear it.

In the past 50 years, America’s bird populations have fallen by a third, and worldwide the average mammal population has dropped 60%, writes acclaimed environmental philosopher and nature writer Kathleen Dean Moore  in her new collection of essays, Earth’s Wild Music: Celebrating and Defending the Songs of the Natural World.

And with all that loss comes an unsettling silence.

“Unless the world acts to stop extinctions, I will write my last nature essay on a planet that is less than half as song-graced and life-drenched as the one where I began to write,” she explains in the book’s preface. “My grandchildren will tear out half the pages in their field guides. They won’t need them.”

Her book uses sound as a reference point to better understand what we stand to lose as extinction rates climb higher. But the essays are also a celebration of the natural world’s chorus and the joy of learning to hear what’s still there.

The essays are also being set to music in a series for Oregon State’s Spring Creek Project that will feature 20 4-minute-long concerts combining live musical performance with excerpts from Earth’s Wild Music.

“I’ve never been so excited about a project in my life,” Moore tells us. “It combines everything I care about with the cause that I believe in more than anything else.”

The Revelator spoke to Moore about the moral stakes of our environmental crisis, what it’s like to find a truly quiet place to listen, and what we lose as wild songs disappear.

You’ve been writing about nature for 50 years. During that time our environmental problems have become graver. Has this changed how you approach your work?

At first I was a celebrant. I believed Mary Oliver when she said, “My work is loving the world … which is mostly standing still and learning to be astonished.” And that went along fine for years and years, but then it became clear that what I was writing celebrations of were disappearing.

Why did you decide to focus this collection on sound?

I started thinking about how I could open people’s hearts without breaking them. How I could point to the onrushing extinctions and not force people to turn away in absolute grief. I decided that I was going to have to write in a way that was like a wave — I would lift people and smash them at the same time.

What is it that reaches people without breaking them? What is it that goes straight into people’s hearts? What do they love about the world and will call them to action?

Nature may be getting quieter. But people are getting louder. How is our noise affecting wildlife?

We are deafening. Noise that we create is causing extraordinary harm to the creatures. Think about the pain caused to the whales from the exploratory thudding of those machines that go through the ocean and stamp to try to find oil.

Think about the meadowlarks that lived in the fracking fields and had to endure endless noise of drilling and trucks. And as a result, the songs of the meadowlarks are fractured and abbreviated. They haven’t been able to hear their parents well enough to imitate them.

Many of us may be out of practice at listening. In fact, a lot of folks walk around with earphones on so we can’t hear what’s around us. How do we get better at both listening to and understanding the sounds of nature?

Listening is an art that we should practice because it does two things. It makes us shut up and it makes us open up. We stop listening just to the songs of “me, me, me”. When we set aside our own stories, it opens us up so we can listen to the stories of other beings. It’s a skill of empathy, isn’t it? Listening to other people’s stories and other creatures’ sounds is a way of understanding the world from their point of view. It’s a moral training.

When it comes to understanding what we hear, Rachel Carson, who wrote Silent Spring, and cared so much about bird song, took pains to tell us that it doesn’t matter if we know the names of what we see. That comes later. But the first thing that has to happen is love.

So I’m not so concerned about knowing which bird is calling. I’m surrounded by people who could do that in a majestic way. My husband can identify birds by their call. My neighbor can. I think it’s a beautiful skill that I don’t have.

But I do have the ability to catch a song. To hear it, which isn’t nothing. It can catch my attention and I can seek it out and I can listen to it. Knowing its name — maybe that’s not so important as knowing its tune.

How are people affected by this loss of nature’s song, and what’s the importance of preserving silent places where we can still experience what’s left?

We lose joy. Let’s face it — the sounds of the natural world are beautiful and they make us happy. I think we also lose a connection to the world around us.

In the book, I write about going with acoustic ecologist Gordon Hempton to One Square Inch of Silence, a small spot in Olympic National Park [possibly the quietest place in the United States]. It was a wonderful experience. At the time, we were in pouring rain. Nature itself was cacophonous, but we didn’t hear a human sound for 20 minutes, which is the definition in Gordon’s mind of a quiet place.

Gordon now is recording in a jungle somewhere that can only be reached by canoeing down a wild river, because it’s one of the last places on Earth he can find that’s silent.

He’s famous for these recordings called the Dawn Chorus that captured the outpouring of bird song that’s triggered by morning light. But he couldn’t do that anymore, because that music box is broken. We’re in the process of wrecking what we should be treasuring.

It’s hard to find a balance between grief and celebration. But you know, people often ask me, “What can one person do?” And I say, “Stop being one person.”

You don’t have to do it all. Other people are working all around the world on the same causes you believe in. Find them, join up with them. You’ll find your place in the choir. [Author and teacher] Joanna Macy says to choose what you love and devote yourself to it. That, she says, is enough.