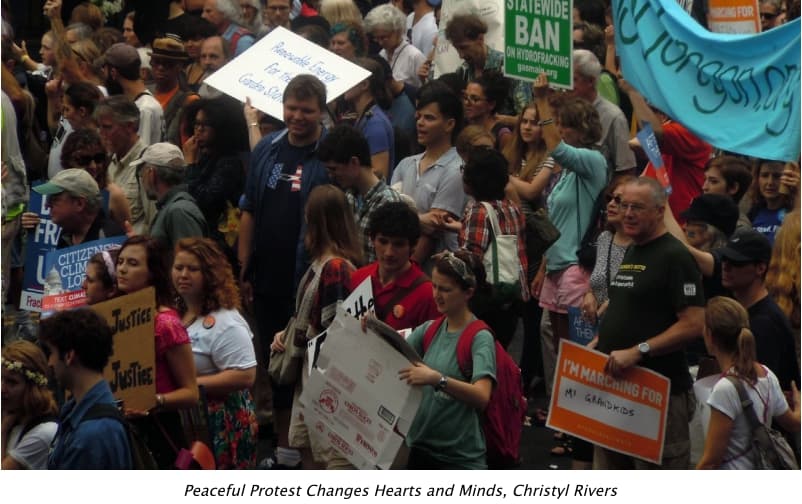 In the wake of recent murders of black men, whether done with actual authority, or assumed privilege, I want to talk about words.

More specifically, I think it would be useful for all people to revisit the wisdom of Martin Luther King. It should never be forgotten that he died at the hands of a Remington 760 rifle, blasted bullet, that highlighted racism at its ugliest. He was shot in the face, his mouth and throat, momentarily, silencing that incredible voice.

Nevertheless, rather than being silenced, this shot amplified his voice at least a million-fold.

It should also never be forgotten that he knew he may not make it “to the top of the mountain top” with us, but that we should strive, always, nevertheless.

My early thinking about racism came long after MLK lay in state, at the foot of that mountaintop. But reading about him, and his enormous and impactful efforts to build a “Beloved Community” always takes me back to his language, his words, his power, and his legacy.

Although I am not sure how he would feel today about the halting, and punctuated (and punctured) progress of justice, I can go by what he felt and taught during his lifetime. He very clearly, outlined that the goal was not for expression of severe frustration, but to focus love, “overflowing” in his words, in order to create an envisioned community of the beloved.

People are angry, and I truly understand that outrage. It’s just that I think Martin Luther King’s approach of non-violence, speaks more powerfully, and less divisively, than rioting and identity politics ever could. For the most part, it does appear that most people protest non-violently. Although, without question, the drama-demanding media will always find a few bad apples to focus on.

This promotes a lie and betrays a cause.

Here I would like to note that King does practice identity politics, as he is forever reminding people of our shared identity as a family of all men, (In today’s enlightened parlance, I believe he would say family of all humanity, rather than ‘men’.) About rioting, he wrote, “A riot is the language of the unheard.” He wanted to factually explain what a riot is, not to assign judgement, nor criticize a riot’s ineffectiveness. Rather, he used language to continually speak of the role of “overflowing love, having recognized, clearly, the Christian need to always elevate love as being more powerful than hate.

He was a preacher, after all.

I think it is harder, now, in a more secular world, to relate to some of the teachings, of Martin Luther King. Still, I think we really must try. King studiously took lessons from Mahatma Gandhi. Gandhi too, liberated an entire subcontinent, by practicing the same very powerful tools, Satyagraha (a struggle to influence policy, non-violently)and Ahimsa, (a do no harm approach to keep resistance alive, vigilantly.) This matters, also, because most of India is not Christian, and most racism in the world is against black and brown people, and it is rarely aimed solely on their faith.

Even India, of course, has its racists still. As the greatest civil rights leaders constantly remind us, elevating love requires constant vigilance, not an end to struggle.

“The experience of these last few days has deepened my faith in the relevance of the spirit of nonviolence, if necessary social change is peacefully to take place.”

The power of his language and determination brings tears to my eyes.

He also fully expected another attempt, telling his wife after JFK was murdered, that he knew what was in store for him.

We need to find the love overflowing that is more restrained, and therefore seen to be powerful. We need more words of what MLK called “reconciliation” not hate and death threats as are now leveled at “Karens” and/or those who claim kneeling at a football game is “Unamerican.”

Nothing could be more patriotic, than urging preservation of peaceful, even reverent, protest.

This fact is not lost to history.

Newsreels from the civil rights era highlight police brutality. This removes the veil of pretended “lawfulness.” We can also see that when the police align now against black or brown people, it is not perceived by the public as an injustice, not an expectation. When they train fire hoses on non-violent native Americans trying to protect clean air and water, or when they pepper spray environmentalists, or Occupy Wall Street, or when police fire rubber bullets, or tear gas, upon the peacefully assembled in Minneapolis, we see this. We see that anywhere such events unfold; the same racist, class warfare protections of the privileged are on full display to the world.

Everyone who thinks, knows that such displays aligned with oppressive power, are on the wrong side of history.

“The very purpose of direct action…”

It is painful, and difficult, to wage a war against sexism, or racism, or homophobia, when the authority is on the wrong side. This is why, more than ever, the good people of the world need to align themselves with Satyagraha, Ahimsa, civil disobedience, and most of all, the most powerful words, and thus, TRUTH, in the world.

I do not think we should expect young men to die as martyrs, But we should embrace the power of truth that seeks to make our police work for us, not against us. That’s a truth that is powerful.

The most powerful thing we can do is speak of in defense of a “Beloved Community,” one that is inclusive of all our allies who “have a dream” for justice, but also to force our perceived enemies to yield to history’s arc.

This is the “very purpose of direct action” which King so eloquently framed.