Get Daily Email
Join/Login CLOSE
Home / Featured Content / Stop Lying to Yourself: When You Snub Panhandlers, It’s Not ‘For Their Own Good’ 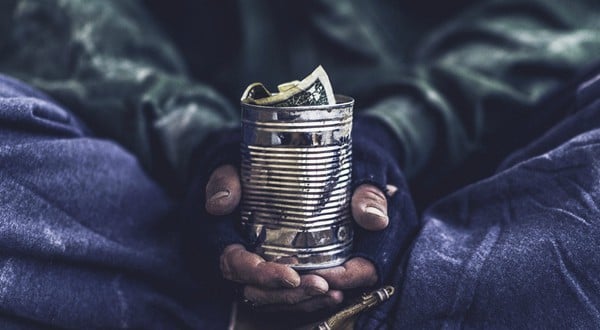 —
I’ve always been wary of those who insisted they were doing something (especially something harsh) for the good of the person who would ultimately bear the potential injury.

When a parent swears to their child that the spanking they intend to administer is “going to hurt me more than it hurts you,” and that it’s for the child’s own good, they are lying in the first instance and terribly wrong in the second.

Likewise, when politicians say we should cut various safety net protections for the nation’s poor “for their own good,” you can bet they haven’t a clue as to what would be in the best interest of such persons, seeing as how they’ve never gotten to know them or anything about their lives.

I found myself thinking about the fundamental absurdity of the “for their own good” mantra again recently, after being approached by an apparently homeless man on the street who asked me for change.

My general rule has always been that if I have a few bucks on me, I’ll usually give it to someone who asks, without much hesitation. After all, begging for money must be incredibly draining given the contempt with which this culture views people who are poor and struggling (and/or mentally ill, as many on the streets are). So if someone has reached a place where they’re desperate enough to endure the sneers of those to whom they make their financial entreaties, I’ve always felt as though a little kindness — though it will hardly ameliorate their condition — will at least compensate a bit for the terse comments and cold stares of others.

Often, however, when I tell people of my willingness to fork over a buck or two to those who ask for it, I’m met with looks of disbelief. Don’t I realize that giving cash to such folks will likely enable their alcohol or drug abuse? Don’t I realize that I should refrain from doing so, “for their own good?”

Yes, of course, I do realize the money might end up spent for such a purpose. But frankly, even if this turns out to be true, I’ve always found such a possibility to be a pretty bizarre basis upon which to refuse giving someone money.

After all, if you were an employer who knew that one of your employees had a drug problem or drank too much, you would hardly refuse to pay them their weekly wages out of concern for where they might spend the money. You would pay them, regardless of what you supected they might do with the proceeds, because you felt you owed it to them; they had earned it. But with the homeless, the real sticking point for those who refuse to give such folks money is a sense that they haven’t. They are not morally deserving of assistance, or so the assumption goes.

Likewise, if you offered a homeless person $100, but only on the condition that they came and cleaned out your gutters for you, or raked the leaves in your yard, you would never refuse to uphold your part of the bargain, simply because you had come to the conclusion that the person who just performed chores for you might buy a half-pint of cheap whiskey with your cash. And you would pay them as promised, not merely because you had a verbal contract to which you felt tethered, but because of the presumption that they had morally earned the payoff.

In other words, to suggest that one is withholding money from homeless people or beggars “for their own good” is a dishonest and preposterous conceit. If you feel that the poor don’t deserve your support because of their presumed moral failings, so be it. But at least be honest enough to admit that it is this — and not some ecumenical, altruistic rationale — that animates your decision.

The choice to withhold money in these cases is about moral judgment: the idea that the poor have not done enough for you so as to justify receipt of even your spare change. If they would just take out your garbage, they might be entitled to your dollar in alms and the hooch that said dollar might help them obtain. But if they merely beg for it, then whether or not they have a drug or alcohol problem you will be free to presume they have both and refuse to aid them, all in the name of a self-righteous contempt, the legitimacy of which you’ll likely never contemplate, let alone think of relinquishing.

Again, this is not to say whether it’s good or bad, on balance, to give cash to the homeless. I know many who say they prefer to give to social service agencies that serve the homeless and destitute, in the hopes that those in need will receive assistance in a concerted and institutional way. Fine, and that’s a perfectly admirable impulse I suppose. But do most of the folks who say they’d rather do this actually end up making contributions to those organizations? Or is it just something people say so as to make themselves feel compassionate — or feign compassion to others — while intending to do neither thing; neither giving to the panhandler nor those institutions ostensibly set up for their assistance?

And even if they do make those organizational contributions, let’s not pretend that such offerings are typically any more palliative for the problems faced by those on the street than simply giving directly to the person who asks for it. Such agencies often separate families (because shelters are typically sex-segregated), and have very little proven success at helping those with addiction issues get clean, for instance.

So when folks say we should give our money to agencies designed to help the poor, without helping us assess whether or not those agencies actually do much to assist them — or without even knowing of their records in this regard — it feels like a dodge; a way to act as though you’re doing something valuable with your money, even though it might well end up pissed away no less so than if you gave it directly to the person doing the begging and they spent it on smokes or malt liquor.

And frankly, even if that’s precisely what they did with it, why should such a possibility engender such rage and contempt? This idea that the poor should enjoy no indulgence, exhibit no vice, and partake in no pleasurable diversion whatsoever — be it a drink, a cigarette, or a cell phone — while still expecting our sympathy, comes very near the definition of sadism.

Are we really suggesting that the poor should be so miserable, so benighted, so prostrated before the rest of us that their only happiness should be an occasional blast of warm air from a steam grate in the winter? Must we demand of the poor every last shred of normalcy?

Are we really so petty that we begrudge the homeless an occasional Bud Light or Boone’s Farm, or candy bar, or pack of Marlboros, because somehow that amounts to taking advantage of our charity? Really? Do we think people who are desperate enough to beg for money every day are really getting one over on us? And even if they were, that somehow this would really matter in the larger scheme of things? That it would somehow suggest we were chumps for working every day and that we should rethink our life choices, perhaps swapping places with the panhandler so we could soak up all that free, presumably scammed shit? Of course not.

The only people who would deny to the poor even these minor indulgences are those who had already decided the poor and destitute are in such a state not because of local, national or global economic conditions, but because of their own moral failings and these quite alone; and that our own successes are likewise not due to inherited advantages, luck, connections, or other factors beyond our control, but are instead the predictable outcomes of our superior character.

For if we didn’t believe this — if we didn’t believe at some level that we were simply better, and quite incapable of finding ourselves in the position of the beggar — we would never take the chance of adopting such a cavalier outlook on those who reside in that space presently. Nor would we allow ourselves to believe that those who might refuse us their quarters outside Starbucks (where they just spent $4 for an overpriced espresso with steamed milk) were doing so for our own good.

They would be doing it, just as so many of us are now, not for the benefit of those to whom they insist they’d be teaching a lesson, but rather, out of a sense of moral superiority, which the society — and not only its poor — can no longer afford, if we ever could.

So do as you like with your spare change. Give, or don’t. But if you choose not to, just don’t lie to yourself about the reason for the decision. After all, the moralizing and the contempt for the poor that so often resides at the root of such a choice is precisely the mentality that creates beggars in the first place, and it’s what propels the political agenda of the right as they seek to cut back on safety net programs. That too is driven by a fundamental belief that the poor are largely undeserving. So long as we hold on to that mentality in our private lives, it will be increasingly difficult to resist it in our public one.

—
This post was previously published on www.medium.com/ and is republished here with permission from the author.
—
Photo credit: Istockphoto.com