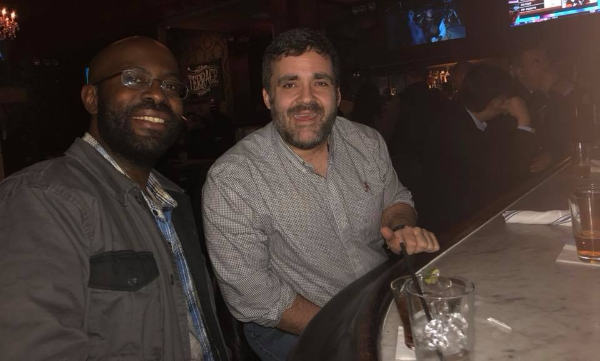 Let’s hop on the King Ryan time machine and take a trip. Way back.

The location: The marching band bus on our way back home.

If I recall, it was about a five-hour ride. We didn’t get in until about 3 in the morning. We were all exhausted.

After I loaded in, I sat in my seat, just absolutely give out. I needed to get away, and I also needed to check in on my Atlanta Braves who were playing a pretty important game that evening on the West Coast. Against the Dodgers, if I recall.

I’m trying my best to find the game on the radio on my Walkman. And I’m also waiting on my friend who was going to sit with me on the way back home.

My only friend at the time was this kid who I never would’ve been drawn too previously, but I was. In retrospect, I don’t know why.

We were inseparable that year.

After I’d been sitting on the bus a good 20 minutes, I watch my friend simply ignore me and go to sit with this other kid who went to our school for a minute and a half before he transferred. I knew this little weasel from my church, and I didn’t like him then.

And I dang sure didn’t like him after that.

So…as usual, I took the long ride back home alone. And heartbroken.

Back to present day, some things simply don’t change.

I recently had a friendship end because of a misunderstanding over social media. I tried to keep this relationship going way longer than my intuition told me it needed to. And I got slapped with the cold fish of reality because of it.

I also recently had a relationship almost end because of – wait for it – a misunderstanding on social media. And let me tell you, this one would’ve hurt way worse than the other did.

And make no mistake, the other one hurt like h*ll!

I’m a guy who thrives off connecting with people. I adore connection more than just about anything else. Talking with amazing, big-hearted humans who love with their whole heart.

But I feel like social media has taken us down a rabbit hole of superficiality, neediness, and anguish.

The lone wolf usually gets picked off by a predator, y’know?

So, to that end, I want to propose five mindful tips that can strengthen your real relationships in the age of social media.

But with this one disclaimer. The closest friend I ever had was a woman named Noreen who I never spoke to in our 10 year plus relationship. Every communication we ever had was by email or Facebook messenger.

Let’s not get it twisted, we can form relationships with people on social media.

Anyway, here are the tips.

1. Be yourself. Have you ever heard the phrase – I wish my life was as good as the life I portray on Facebook? What’s wrong with showing people your truth? What’s wrong with letting your guard down and showing your humanity? Why can’t you show the first selfie you take instead of the 50 selfies that didn’t make the cut? Be real. Be vulnerable. And be yourself.

2. Let your guard down. Perfection is overrated. Real is rare. It’s like I’ve said over and over again – pretty girls are a dime a dozen, but a beautiful soul is rare. That “perfect” picture was probably taken with a DSLR camera and photoshopped to within an inch of its life. If you want a real relationship with someone but you’re showing up as “perfect” then they’re really going to be let down when they find out the truth.

3. Be seen. “Courage starts with showing up and letting ourselves be seen.” – Brene Brown. Let yourself be seen for your faults, your warts, and your blemishes. The picture you show of yourself executing a perfect handstand on the beach during a magic hour sunset with an out of context Tony Robbins or Rumi quote doesn’t show who you are. It gets likes. Would you rather be liked, or would you rather be seen?

And last but not least, the fifth and final tip. Here’s one that we don’t put into practice nearly enough.

5. See them in person. This may be difficult when you’re a thousand miles away (like I am with most of my family.) But you can always say hi. Facetime, zoom, or Skype are incredibly valuable tools in this case. But nothing – and I do mean nothing – beats the personal touch of sitting down for a drink or coffee with someone you haven’t seen in ages. Giving them a dap, shaking their hand, or a big bear hug. And sincerely asking them “Just how in the hell have you been? Leave nothing out!”

A few years ago, I reconnected with my old friend DeAngelo. He and I have been friends since third grade. I visited Southern California where he lives and we had a great dinner, drinks, and met some really drunk women – one of whom asked me to smell her hand for some reason.

But it was like we had been in steady contact for years. We hadn’t seen each other in maybe 20 years, but it was as if we never stopped.

Human beings crave connection like we crave food and water.

So, once you finish reading this piece, close out your web browser on your phone. Open up your voice app. And press send to that one person you want to call the most but are afraid to. And make plans to meet them for lunch or coffee.

You’ll be glad you did.

P.S. Next week I’ve got an interesting article planned. I’m going to be speaking of the power of forgiveness in these relationships. That’s a don’t miss.

Facebook34Tweet1Pin1EmailShares36
wpDiscuz
0
0
Would love your thoughts, please comment.x
()
x
| Reply
Share this ArticleLike this article? Email it to a friend!
Email sent!