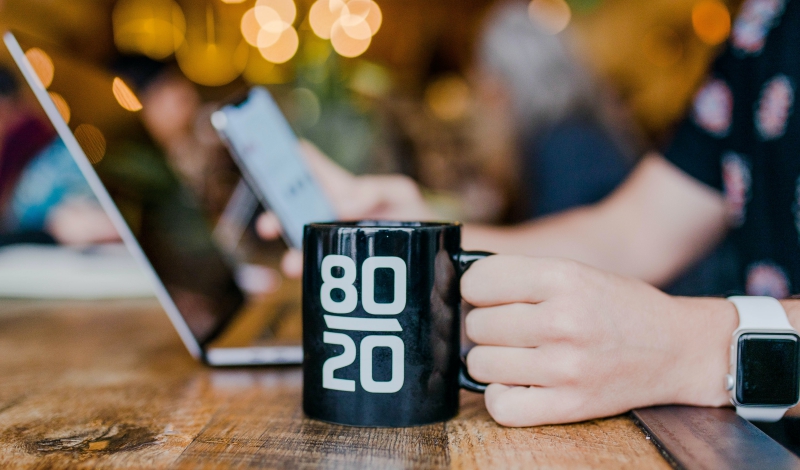 Eight years ago, I had a mid-life crisis at the ripe age of 21. I was studying abroad in the US, and, suddenly, nothing about the career path I had chosen two years earlier seemed to make sense anymore.

Why do I need to work 60 hours a week just to pass seven random exams at the end of the semester? Should I really become a consultant if it means I won’t have time to spend any of the money I make? If I’m gonna work a lot, shouldn’t I work on something I believe in?

I was desperate for answers to these questions, and today, I’m happy to say I found them. I built a career that can last a lifetime from scratch, and even in its early stages, I earn more than the best entry-level job could provide. I’m not worried about the future and can stomach bad days with relative ease.

Of course, a lot happened in those seven years, but one of the first steps I took was so simple I didn’t consider it to be “a step” at all: I started a Facebook Page and posted inspiring quotes. Every day, I shared cliché little phrases with the world — on one hand, to take a stand in public, on the other to talk myself into going after my dreams.

While it’s easy to dismiss lines like “actions speak louder than words” as glib and indulging, they’re valuable not always due to their meaning but because they get you to do something when you would otherwise be doing nothing.

That said, I also learned that it doesn’t matter if something’s cliché as long as it’s true. Once I got off my high horse and really made an effort to consider and implement these ideas into my life, things did change for the better.

Here are seven of my favorite lines from that time and how they changed my perspective.

In 2012, spoken word artist Suli Breaks made it big on Youtube. I’ll never forget this one line: Even if you win the rat race, you’re still just a rat.

There’s a difference between a job and a career, no matter how much you get paid. Suddenly, I could see them all around me: highly paid, successful people who were miserable. Even in my close family, I spotted the golden handcuffs, and it terrified me.

As a result, I started running, running away from what I didn’t want. I had no idea where to go, but it was enough to get started and not lock myself into a life of unhappiness.

Take a hard, honest look at what you aspire to. Why do you really want it? Are you playing your own game? Or just another rat race? It’s never too late to get out, but if you can, save yourself the trouble: Don’t get into that damn wheel.

2. To make your dreams come true, first, you have to wake up.

Just like that first realization, it hit me like a ton of bricks that no one would come and save me. If I was gonna get the dream career I wanted, I would have to build it myself. I and I alone.

You can’t get things done when you’re deluding yourself into thinking they’re already, somehow, magically happening. They aren’t. Wake up. Look around you. This is where you’re at. It may not be much, but now that you’re actually here, you can finally get started.

3. The price of security is insecurity.

The most common objection I heard when telling people about my plans along the way was, “But it’s risky.”

In the short run, that’s almost always true. Your paycheck is guaranteed, your next contract isn’t. But in the long run, the only thing that’s risky is taking no risks at all. If you’re not diversifying somehow, you might one day find yourself with nothing — no job and no alternatives.

No one cares about your wellbeing, be it financial or otherwise, as much as you do. This is the cold hard reality of business. Plus, if you never try, you’ll always wonder. You may have a stable job, but you’ll always feel insecure, which is much worse than learning to trust yourself and your skills, even if your next gig isn’t guaranteed.

4. You can’t get what no one has if you do what everyone does.

For the nearly ten years I spent in various colleges, there were always people around me who hoped for the same thing: to be an entrepreneur, to run their own charity, to do something big, something they came up with themselves.

Yet almost all of those people kept going to class the next day as if nothing had happened. During my Master’s, I often felt like an antibody. A particle that didn’t belong into that system. Sometimes, this was difficult, but it was definitely necessary.

5. Anything is possible if you pretend you never saw the obstacle.

Tim Ferriss has a great bit on why hard goals are easier to achieve than normal ones:

That’s the great thing about doing what no one else does: No one’s there to try and stop you. Don’t sell yourself short before you leave your house in the morning. Pretend nothing can get in your way, and a lot less will.

Of course, you will hit obstacles. Shooting high is about daring to try, not feeling entitled or expecting everything to always work out instantly.

Once you do reach a roadblock, however, you can react one of two ways: You can throw your arms in the air, turn around, and walk away or you can roll up your sleeves and say, “Let’s figure out how to turn this into a springboard.”

Writing about what I want and getting paid for it was a very distant dream when I started. None of the business models I earn with today even existed. But I saw some people making it work, so I started writing — and here we are.

7. How you do anything is how you do everything.

An extension of the above is that there are also two main ways people look at the world: Either nothing matters, or everything does. The important part is you can choose. I choose the latter. It makes me optimistic, kind, and excited.

Life doesn’t happen in a vacuum. Once you behave as if everything is connected, you’ll see many things actually are. You won’t be able to explain why that one line stood out to that one person and why they were the daughter of who would get you in touch with the right people, but you’ll act like everything you do makes a difference — because it does.

Reading these quotes didn’t get me to the happy place where I am today, but listening to them for sure played its part.

Don’t get dragged into the wrong games with the wrong people. Don’t fool yourself, but always believe in what you can achieve. Be crazy and realistic at the right times and about the right things, and remember everything matters.

You might not get there tomorrow, but, eventually, you’ll get the career you’ve been looking for.

This post was previously published on Entrepreneur’s Handbook and is republished here with permission from the author.
—