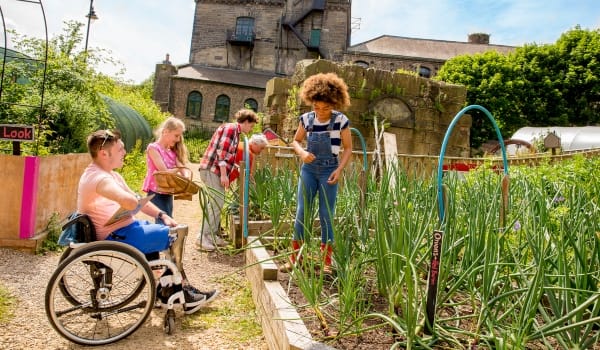 If you can make it there, you can make it anywhere. Egalitarian communes create an alternative to capitalist individualist lifestyle and values. The add communal organization of life and sharing living space to the self-managed enterprises that they operate to generate income. Living in such setting means agreeing to be challenged and confronted with the conditioning of modern upbringing. They developed practices that help to create an alternative to the socialization in the capitalist system. Maintaining “good vibes” does not come naturally as we may assume but requires structure, regular practices, and group effort. In a community, a two-person conflict is a community affair because the entire community may be affected.

Creating an alternative economy and organization of production implies a transformation of the relations and ways of inter-personal functioning that have been inculcated into hierarchy culture and the capitalist system. The following analysis will give some insights into intentional ways of creating a new culture that can serve as an inspiration for the organizations that want to create an alternative to the mainstream. We can learn from these advanced forms of cooperation for other co-operative projects.

I interviewed dozens of members of two egalitarian communities (also called communes), rural Acorn community in Virginia, US (consisting of 30 adults and one child at the time of research in 2014) and suburban Kummune Niederkaufungen near to Kassel in Germany (consisting of 60 adults and 20 teens and children in 2016). Egalitarian communities constitute a more advanced version of experimenting with alternative economy than ecovillages. They share labor, land, and resources according to one’s needs and everyone contributes in a chosen way to reproductive and income-producing endeavors. They apply the principle of consensus to their decision-making.

How the communes maintain good vibes?

In both communities, there are weekly meetings to discuss and make decisions. They are also an occasion to get updates on the lives of individual members and communal affairs. In Niederkaufungen, there is a general meeting once a week and working groups that discuss specific topics meet according to their own schedules. In Acorn, another weekly meeting is scheduled to discuss a proposed topic with a moderator. This may serve as a preparation for decision-making during weekly General Assembly.

In both communes, all kinds of conflicts, all kinds, including romantic breaks-ups are seen as a communal affair. There are several people who volunteer to be mediators in such cases and help the conflicted to communicate. One of Niederkaufungen’s enterprises is a training center for non-violent communication (it is a method and theory developed by Marshall B. Rosenberg1). Therefore, the community has experienced trainers and many of the members are familiar with the method. This, however, does not mean that there are no conflicts. Some people have not talked to each other for years as a consequence of a conflict. Some resentments are held for a long time, which is often caused by not knowing and understanding the other. They may avoid the resented person and gossip. Some people feel frustrated because decisions and changes in the life of the commune take such a long time. Discussions in groups to understand different standpoints on an issue causing a conflict also may take time.

Living in a commune is not easier than in the mainstream society – it is challenging in a different way. It involves a lot of talking: in assembly, in smaller groups, informal exchanges. Gossiping is a form of dealing with frustration. Talking seems to be a crucial factor in maintaining togetherness and self-insight.

Both communities recognize that being closer and more inter-dependent than it is usually the case in the relationships outside one’s family is a challenge. The communes have developed their own ways of maintaining community spirit and good relations among communards.

Creating an alternative reality to the one imposed by neoliberal agenda requires capacity to organize, be part of a group, commitment to collective efforts. These skills are a base for cooperative enterprises, consumer self-organizing, and other forms of collective autonomy. Many of my interviewees mentioned that work is different in their communes because they can show up the way they are. There is less pretending. I am convinced that culture can be shaped despite our conditionings. It is an interesting human adventure to look into the mystery of inter-personal relations. Many of the communards that I interviewed revealed intentional personal and group work on this very aspect. They undertook practical steps to make it work. So can we.

Short description of Acorn and Niederkaufungen

Acorn community is a farm based, anarchist, secular, egalitarian community of around 32 folks, based in Mineral, Virginia. It was founded in 1993 by former members of neighboring Twin Oaks community. To make their living, they operate an heirloom and organic seed business, Southern Exposure Seed Exchange (“SESE”), which tests seeds in the local climate and provides customers with advice on growing their own plants and reproducing seeds. They work with about 60 farms that produce seed for them, which they test for good germination, weigh out, and sell or freeze for future use. The seeds are chosen according to their reproduction potential so that gardeners can reproduce seeds from the harvest instead of buying them every season. The enterprise conducts and publishes research on the varieties so that customers take less risks when planting them. Acorn is affiliated to the Federation of Egalitarian Communities, a US network of intentional communities that commit to holding in common their land, labor, resources, and income among community members.

Kommune Niederkaufungen consists of about 60 adults and 20 teenagers and children. It was founded in the late 1986, after three years of preparing and campaigning. Meanwhile other income-sharing communities have been established in the region of Kassel. They are a left wing group, with positions that range from radical and social feminist, through green/ecologist standpoints, over Marxism and communism, to syndicalist and anarchist positions. Many communards are active in political groups and campaigns in Kaufungen and Kassel. Nowadays, they are economically autonomous. Their enterprises include elderly daycare, child daycare, training in non-violent communication, a seminar center, catering and food production, carpentry. Some members are salaried outside of the commune. To become a member, one needs to give all the property and savings to the commune. However, it is possible to negotiate a sum of money in case of exit from the commune to start a new life. The commune is a member of German network Kommuja. To read more about the commune, see: https://www.kommune-niederkaufungen.de/english-informations/

This post was previously published on P2Pfoundation.net and is republished here under a Creative Commons license CC BY-ND 3.0.