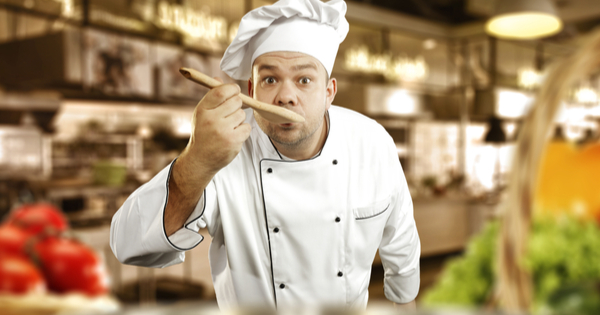 He’s a year shy of being a teenager but has already mastered the art of questioning his father.

“No, you haven’t. I don’t think you can!” On the TV, the cooking show host talked about the value of parsley.

“You guys don’t like it unless it’s in a taco shell or in the form of a nugget.” I have been the primary cook for my family for ten years. I’ve done the math. I’ve cooked over 10,000 meals. I can absolutely cook a “fancy” dinner that has plenty of parsley.

And that is how the gauntlet was thrown.

I planned the menu a week in advance. There was no normal cookbook with their talk of healthy portions and carb counts. I grabbed Julia Childs from my collection. The book’s weight is proportional to the amount of lard you usually have to buy to cook one of her recipes. The pages are very greasy from generations of us because this is the type of cookbook that is passed down.

Inside, there are handwritten notes from my mother-in-law as well as a Reader’s Digest article from 1985. If you can lift Julia Childs’ book then one day you will be King of England. It’s true, I saw it on the internet once.

I shopped for three days to get the freshest ingredients. At some point, a magical guide appeared to me and said: “Better get some more lard.” I opted for the butter substitute because that felt less heart-attacky.

I got out my best pots and pans and had them blessed by a priest, a shaman, and Jill from a cooking blog. She posts on Pinterest a lot.

The day of the meal, I started my prep work three hours ahead of dinner time. I turned the sundial to coordinate with the oven timer.

I can’t cook a fancy dinner? Bull. I handpicked my own parsley from a field in France. Jill was there.

I French cut fresh green beans. This technique has a purely psychological effect. It’s so dinner guests can say: “Hmm, this is French cut so it must be like a French fry. Delicious. I didn’t realize potatoes had seeds”

Then I de-stemmed the fresh spinach (not from France) the same way Mrs. Childs did. Basically, I pawed at it until it looked properly shammed. Carrots peeled and cut through the length, egg yolks separated from the slimy white parts, butter cubed. As I worked up a sweat, I took a drink of my lard infused pre-dinner drink.

I started in on the meat. Sirloin steaks picked with the attention of a crime scene investigator. Perfect marbling with a lard base.

I patted them dry so that they wouldn’t steam while I seared and gave them a pep talk so that they would know they will be the best that they could be. The mushrooms were fungused, more lard appropriated, and everything given a nice truckload of salt to insure high blood pressure.

“Alright, buddy,” I said to my son. “Get in here. We’re cooking a fancy dinner.”

If you are going to call a man out on his ability to cook, you need to be prepared to take your lumps when he throws it in your face.

“Um, nothing,” I replied. I threw a hand towel over his shoulder because that is the official uniform of the amateur home cook.

We began. In a whirlwind, we minced the garlic and quarter the red potatoes. We added nothing to the steak but salt and pepper. On and on it went as the world passed us by.

“Dad, my feet are getting tired,” he said.

“Suck it up! Real men don’t move until the oil begins to smoke!”

I showed him how to sear a steak on a cast-iron skillet, all the while making sure that the green beans had the right amount of lemon juice added.

“Too bad, slick! This is cooking so grow an extra hand. Now imagine doing this with three kids throwing things at your face and trying to punch you in the junk. Your generation has it easy!”

I don’t think they have it easy but their lard knowledge is lacking. I was trying to make a point. You want to know why I don’t cook “fancy” meals all that often? I’ve been cooking for three hours at this point, and I’m pretty sure that one of the other kids may have stolen my car and made an escape to get me more parsley.

Finally, we started the béarnaise sauce. It’s a delicate thing. A combination of shallots, white wine vinegar, and hope.

“Throw the butter in!” I told him.

“All of it! All of the butter, damn you! Ha-Ha!” I cackled like Victor Frankenstein. We are making a life here.

“I don’t want to stir anymore,” my boy said.

“No! You must always stir!” I said as I cut the steak into beautiful little medallions like little Olympic golds.

“Dad! Something is gone wrong with the sauce,” he said. And indeed, it had. The egg separated from the butter so that it appeared to be a popcorn buttered scrambled eggs.

“Again! We shall do it again!”

“This is how you make a fancy dinner. Remember, you asked for this.”

We did indeed remake the béarnaise sauce. And then, I called the family to the dinner table. The kids, on seeing the sautéed spinach and mushrooms, the french cut beans, roasted red potatoes, steak medallions with a perfect sear, did not look happy

My wife, on the other hand, couldn’t stop smiling. Ear to ear and she didn’t even wait to talk. She started eating.

“Uh, Dad,” my son said as he picked a piece of parsley off his potatoes. “Can I make a sandwich?”

“Nope. You said I couldn’t make a fancy dinner. You asked why we never cook like this? Well, here you go. Eat every bite.”

I spooned a clump of wilted lard covered spinach on his plate. This is the grossest of the gross. Sautéed spinach looks like swamp scum. And he’s going to eat it. “Choke it down, champ.”

All told, the dinner took me a little over three hours to prepare. My son made a lot of noises as different slimy things went in his mouth. My oldest daughter had one piece of meat. My youngest, the six-year-old, just ate raw carrots. By the time we were done, I think my children were more hungry than when we started dinner. This is why I don’t cook like this often.

“I love you so much,” my wife finally said as she drenched yet another piece of steak through the béarnaise. “So, so much.”

Then she burped and promptly fell asleep on the couch.