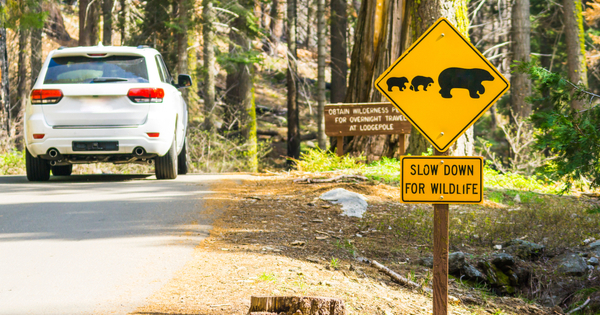 “I’ve got to pee,” the five-year-old says. We’ve been on the road for twenty minutes. Only nine more hours to go.

After a quick stop at a questionable truck stop, I’m pretty sure I have V.D. just from breathing in that bathroom. Then we are back in the car, ready to endure the fabled family road trip.

It doesn’t matter where we are going. The trip is just something that every father has to do. It’s like those guys that run triathlons for fun except there is more throwing up from exhaustion on the road trip.

In the first hour, two fights break out in the back seat. I take bets from my wife. I give good odds to the moody twelve-year-old. She’s got size that the ten-year-old lacks, although he makes up for it with the constant amount of gas he is laying down.

We spend the majority of hour two with our windows rolled down.

Hour three starts with the beef stick that I got at the truck stop acting up. I try to sweat it out for thirty-nine minutes before I’m begging for a stop. On County Highway R we find a construction site and a porta-potty. I do the walk of shame, give the fellas a head nod, and explain that I’m on a family road trip. They get it.

Four hours in and it’s time to stop for lunch. My daughter explains that she will only eat non-GMO food that is vegan approved.  My son wants sushi from a diner in a flyover state. The youngest decides that everyone should have nuggets. Only nuggets! Everyone gets nuggets! I throw a brown paper sack at them and tell them all to enjoy their PB and J as we pull into the rest area. I see other dads picnicking on the side of the road. In the heat, with melted peanut butter, we all come together to talk about the gas mileage we’re getting.

On the road again, in hour five, we run low on supplies, but I can’t stop. Fuck no, we are making great time and that’s all that fathers really care about on the family road trip, making great time. I snack on seat peanuts or whatever else I can find that has fallen in between my crotch while I drive. Crotch trail mix is delicious.

Magic happens in hour six, and my wife and I can’t believe it. Everyone falls asleep. It’s as if someone actually sent us “thoughts and prayers” and that shit really worked. But only for twenty minutes before the boy farts, the girl hits him, and I spray them both with a water bottle like they are cats. The five-year-old pukes and then asks for nuggets.

We make another stop seven hours in. There is a twelve-foot-tall jackalope that someone has built right off the highway. It’s basically a fake giant rabbit with deer horns. The whole family gets out of the car and stands in front of it. It’s raining, but I make everyone line up and take a picture. I have no idea why I do this, only that I have to. It’s expected. One day we will all look back at these glorious memories.

Eight hours and time is getting short. But it’s getting tough. The A/C is on high, but I’m still sweating. I need to replace fluids, so I ask my wife to grab me some foot water. These are the water bottles that are littered in the back seat that the kids drank only half of. Instead of finishing them, they just throw them on the floor. They are kicked on, stomped, and some leak when you pick them up. It’s like I’m in an apocalypse movie trying to find enough water to survive.

And then, at hour nine, we’re almost there! We are in the right state! We are so close, and the family perks up. Until I take a wrong turn – it’s probably because of the truck stop V.D. – and we end up on a dirt road. There are no streetlights. In the darkness, I can hear a cow moo. The kids freak out, my wife is hyperventilating as she imagines The Texas Chainsaw Massacre happening somewhere close by.

In hour ten, the bonus hour of every family road trip, I find the right turn and get to our cabin. It’s in the mountains and everyone is exhausted, but happy. When the kids step out of the minivan, three metric tons of garbage falls out. It’s like I have Sanford and Son in the back seat. We could make folk art of all the crap we got. Maybe a giant jackalope. But we made it. We are at our mountain cabin.

There is a bear in the front yard of the cabin. A big fucking black bear just sitting there.

Hour eleven, the bear’s hour, is spent in quiet as we drive around waiting for the beast to leave.