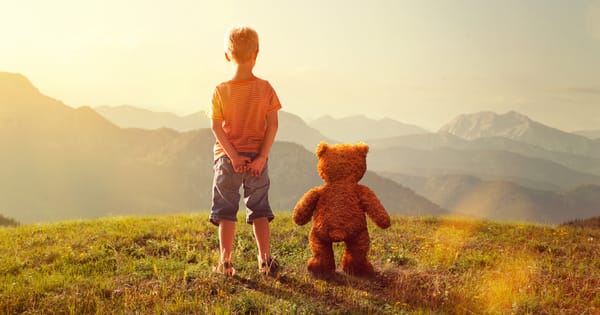 If you need a friend, don’t look to a stranger
You know in the end, I’ll always be there

The Promise, When In Rome

I was sitting in a quiet corner of a quiet cafe the other evening when Steven came and joined me.  I already had my coffee half-finished and was fretting away on my phone when he sat down and cleared his throat, twice, an indication he had something important to say or was struggling with a mild form of Bronchitis.  It turned out to be the former.

“I think you need an imaginary friend.”

“An imaginary friend.  You need one.”

I shook my head and returned to my phone.

“Do I have a choice?” I half-mumbled as I punched away on the keys.

“Of course.  You know I’m not demanding that way.”

I could have disagreed.  But in truth, despite my seeming indifference, I was intrigued.  And also drained from checking my twitter feed.  I put the phone in my backpack, finished my coffee, and tried out my best smile.  Unfortunately, it came out lopsided, so I made sure Steven knew I was sincere.

My encouragement clearly bolstered him.  He shot me his own smile, much cleaner and more realistic than mine, and then spoke.

“Basically, you’re at a crisis point in your life.  You’re reliant on social media to affirm your self-value, and the only thing it’s affirming is that you’re not valuable.  You also watch way too much television, carry a stash of powdered donuts in your backpack, and I know for a fact you lied the other day about your age to get a senior citizen discount for popcorn at the movie theater.  You need help.

“In the form of an imaginary friend?”

Sure.  You’re a literary man.  Remember what Edgar Allan Poe wrote: “They who dream by day are cognizant of many things which escape those who dream only by night.”

“Kudos for quoting Poe, but I don’t see how it relates.”

“Precisely.  You have trouble relating.  It’s one of the three main reasons kids create imaginary friends:  to have someone in their life they can better relate to – someone who ‘gets’ them, who won’t hurt their feelings or reject them.”

I was becoming uncomfortable with the talk and snapped back.

“If you’re feeling defensive, then I must be right.”

I resisted the urge to pull out my phone and calmed my voice.

“Okay.  What’s the other reasons?  You said there were three.”

“Well, it’s just what I’ve read in a psychology journal, but imaginary friends can also help children feel more competent.   For instance, say a youngster is always being reprimanded by a parent for not tying their shoes.  They can project this discipline onto a make-believe pal, reminding them to tie their shoes.  In this way, in their minds, they become the competent adult.”

“You read this in a psychology journal?”

“Maybe it was The New York Times.  Same thing.  Anyway, the other reason is autonomy.   A child can use an imaginary friend to gain a greater sense of control.  A classic example is bed-time.  Say a child wants to inch out a few more minutes before lights-out.  They can use as an excuse that they are waiting for their imaginary friend to finish brushing their teeth.  Or their friend can’t fall asleep without having a story read to them.  That kind of thing.”

“All well and good for a child,” I said.  “But I’m more old than young, remember?  And with my energy bills, no one has to tell me to turn off the lights.”

“Granted.  But be honest.  You feel more and more lost each day.  I bet you don’t understand half of the cultural references made on Twitter.   And you don’t even have an Instagram account.  How can you say with a straight face you wouldn’t be happier conjuring up a friend who has the same trouble relating to modern life as you do.”

“I’m happy enough.  And I’ve plenty of friends who don’t get what I don’t get.”

“Okay.  But what about competence?   It might feel nice to give advice to someone who has no choice but to take it.”

“I don’t know, that sounds too controlling.”

“Think of it more as reclaiming autonomy.   Listen, just because you’re an adult don’t think your emotional needs are any less than when you were a child.  Sure, you’re more mature and you have more experience, but you also have more responsibilities and pressure.  It’s a tough world, and there’s nothing wrong with making it easier.  And it costs absolutely nothing.  You don’t have to buy an imaginary friend a birthday gift, or drive them to the airport, or do whatever you don’t want to do with them.  You’re the creator of the relationship.  You’re in charge.  Doesn’t that sound perfect?”

“Having an imaginary friend, when you’re my age.  Won’t people think I’m strange or imbalanced?”

“Let them think what they want.  You don’t seem to care about other things, like wearing compression socks as winter leggings.”

I was interrupted by a cafe worker who shouted over that they were closing.   I hadn’t realized the time, and I started fishing in my backpack for my phone to check for messages.  But Steven’s words resounded in my head, and I stopped searching and looked up to tell him that I would give the idea of an imaginary friend some serious consideration.

But he was gone, vanished into the proverbial thin air, leaving me alone with my thoughts, which, perhaps, were more than enough to get me through the moment.

END_OF_DOCUMENT_TOKEN_TO_BE_REPLACED

Facebook39Tweet4PinEmailShares43
wpDiscuz
Share this ArticleLike this article? Email it to a friend!
Email sent!