Originally published at https://lllusa.org on November 15, 2022.

I didn’t know much about lactation before I had children. The only fact was that my mother had nursed me during my first year of life. A community of breastfeeding family members did not surround me to normalize this phenomenal experience. During the postpartum rotation in nursing school, my curiosity about human milk and breastfeeding dynamics started. The babies in the postpartum unit attempting to nurse and the sweet commonality among the ones put to the breast ignited that curiosity. It was the inborn knowledge of the newborn looking for a nipple and the awareness to nurse — their rooting, sucking, and grasping reflexes working together to give them a healthy start outside the womb. I also noticed the excitement of a newborn latching and sucking with so much enthusiasm. The thirst for latching was nothing other than heartwarming. For the first time, I wondered about the taste of human milk.

Then I gave birth to my firstborn, R, who did not have any issues getting started breastfeeding. I even followed videos on how to latch correctly, videos that gave me validation that I was doing it just right (as if there is just one way to do it.) My son was thriving, and similar to those babies I had once cared for during nursing school, R was doing the same — reflexes aiding him to take in breast milk with delight, gusto, and passion. The audible gulps, body movements, head nodding, and playful hands indicated satisfaction as he grew. What was he tasting? What was making him happy?

Two years later, I gave birth to my second son, O. It was a rough start. I had specifically researched to find a doctor who would let me try for a vaginal birth after cesarean (VBAC). It didn’t work, and I was rushed to the operating room for a cesarean. Afterward, I developed postpartum endometritis, a uterine infection. Simultaneously, engorgement led to a bout of mastitis. I was exhausted and in pain. Despite that, O nursed pretty well, and I was content to see him thrive. Like R, I noticed O’s movements and sounds, the gulps, and the playful hands, mouth, and head rotation. All indicated a satisfactory meal. This time around, R, my eldest, showed the same curiosity I once had. In the sweetest of voices, he asked, “Mama, what does your milk taste like?” He caught me off guard with his curiosity.

At that moment, I came up with an idea. We would try my milk. Why not? It’s safe; it’s mine. O is living on it, and R was a thriving baby due to its abundance. R’s eyes widened with excitement, and he gave me the most delighted grin a preschooler could give a parent. We both tasted a little. I did not expect it to be so tasty and soothing. R agreed that it was sweet milk. R smiled, walked away, and continued with his play. On the other hand, I was left intrigued as it tasted sweet with a dash of delicacy, and I decided to find out more about the composition of human milk.

So here is the thing: human milk is full of essential natural components that benefit the baby. I recently found a study on the National Institutes of Health (NIH) platform explaining the components and associated benefits in detail. It was a 2021 study entitled “Human Breast Milk Composition and Function in Human Health: From Nutritional Components to Microbiome and MicroRNA.” Sure, it’s a scientific piece that goes into scientific ramblings. Nevertheless, it highlights the following points that showcase, in a nutshell, why human milk is sweet tasting.

Human Milk is composed of the following:

These are all-natural components that support the growth and development of a baby. Of course, the study went into much more detail, but my point is that a high percentage is from the carb lactose, which gives human milk that natural sweet almond taste. This is the reason we see the gusto, the passion, the excitement, and the satisfaction when the baby nurses.

Each component has a specific role to fill to benefit the baby. Lactose not only gives the sweetness that brings comfort to the baby, but it’s needed in early human brain development. Babies have high energy demands to increase weight, develop the brain, and aid absorption. Lactose provides necessary energy, while, concurrently, proteins and fats play a crucial role in the growth and development of all systems. All these components play a critical role in fulfilling the immunological and nutritional needs for a child’s well-being during this crucial growth phase. In addition, evidence has shown that human milk also contributes to intestinal colonization, immunization, and prevention of diseases. It’s a win-win situation.

The sweet taste and aroma are enjoyable to babies, while human milk promotes their growth and development in every phase of the breastfeeding journey. I am glad I tasted it and feel content knowing I contributed to the well-being of my boys. I hope you are also enjoying your journey, knowing the sweet-tasting milk is in the works of building a healthy child.

Lola Ravid is a Pediatric Nurse who is passionate about education and research. In 2009, Lola graduated from Mount St. Mary's College with a Bachelor of Science in Nursing. She has had over ten years of combined experience working with children in hospitals and public school settings. She writes engaging children, parenting, and health content to educate and encourage lifelong learning. Lola's extensive experiences as a nurse, a mother, traveler, and child advocate inspire her to complete each project; with a relatable, evidence-based approach, and a touch of perspective.

Since 2016, Lola has volunteered at the Selective Mutism Association and became an accredited leader for La Leche League International in 2022. She is a polyglot, philomath, and self-proclaimed historian. 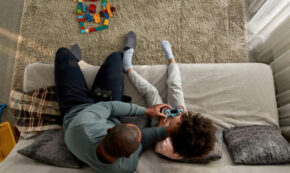