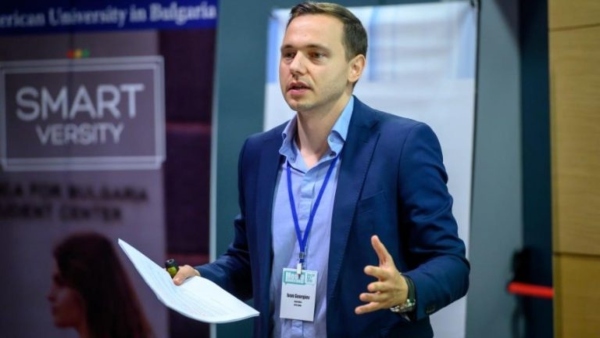 This story originally appeared on Meta.mk News Agency, a project of Metamorphosis Foundation. An edited version is published below as part of a content-sharing agreement.

Ivan Georgiev is a Bulgarian reporter and anchor for bTV, one of his country’s leading TV stations. He has covered major international and regional events in the past few years and has directed several short documentaries.

In 2012, he was awarded the World Press Institute Fellowship. He is also the holder of several journalism awards, including The National Grand Award for Investigative Journalism, granted by “Radostina Konstantinova” Foundation. He holds a degree in journalism from Sofia University “St. Kliment Ohridski”.

Meta.mk News Agency spoke with him about disinformation and manipulation of public opinion in Bulgaria and on the broader region, focusing on North Macedonia as a potential target for malicious content.

Meta.mk: What are the most noticeable manipulations and disinformation spread through the media in Bulgaria or Bulgarian language?

Ivan Georgiev (IG): We probably need to first differentiate between the main types of fake news thrown into the public space in Bulgaria. A closer look at the problem will clearly outline two main narratives – one directed towards the West (against the EU, NATO, the USA, and Western values in general). And second – fake news, directed against local Bulgarian independent media and journalists, politicians from the opposition, non-compliant businessman, intellectuals, and all those, who dare to criticize the political status quo in the country. They are often referred to as “Soros agents”, “homosexuals”,”traitors”, “supporters of anti Bulgarian and anti Christian conspiracies” and so on. In other words – it’s for internal use only.

However, more often than not, those two disinformation flows overlap each other and cannot be distinctively split apart. 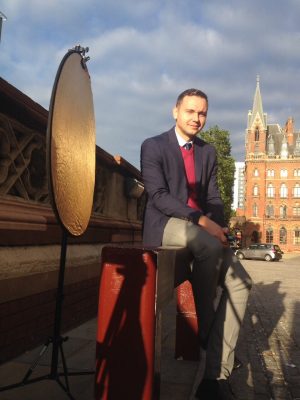 Without conducting any scientific content analysis of fake news in Bulgaria, as a working journalist and consumer of local news, I would say that the first type of misinformation is more dominant around here. And there is a clear reason why – when talking to young journalists or journalism students I often refer to one single question: Do you know what the accumulated defense budget of NATO alliance is? Keep in mind Bulgaria is a member state.

And do you have any idea about the defense budget for the same period of time of the Russian Federation?

If you cannot win a conventional confrontation – with guns, planes, tanks etc, it is only natural to transfer the action to the field of the so-called “hybrid war”, as we call it – fake news and control over the information flows are the most effective weapons in this combat. Control of media as well. Controlling people’s trust in media, too.

Bulgaria is a border state between the West and the East. And although the majority of our citizens identify themselves as “pro-EU,” “pro-NATO,” and “pro-Western values,” our country has its deep historical and cultural ties with Russia. That is why it is seen as a weak spot on the European map by the Russian propaganda. That is why headlines, which generally sound like “Norwegian pedophiles want Bulgarian children” or “Europe is banning Orthodox Christianity” are even possible.

Meta.mk: Does Bulgaria have any action plan on countering disinformation and manipulation, and have you seen any progress or impact?

IG: There are several joint initiatives by the EU, as well as several European platforms, which try to reach the local news consumer, but I would say their footprint is minimal to none. Even if there is an actual, specific plan to fight fake news and disinformation in Bulgaria, I haven’t heard of it. In addition, I honestly think there is no sufficient political will to address this problem, since, in the first place, politicians in power and their affiliated businesses benefit to a great extent by all the negative campaigns against the independent voices in the country.

Meta.mk: Have there been any convictions for inciting hatred and causing damage through spreading fake news – disinformation, or hate speech?

IG: There were a few cases of investigation and even one or two preliminary charges, but no final convictions. It may be curious for your readers to learn that back in May 2018 the Member of Parliament with the biggest opposition party at the moment, Mr Tasko Ermenkov, came into public focus after spreading the rumor that the water in our nation’s capital (Sofia) is poisoned and people should not drink it via his Facebook profile. The prosecutor’s office then refused to investigate the case and to press charges against him.

Meta.mk: Are the media associations active in countering disinformation?

IG: I think they have more of a declarative than proactive nature.

Meta.mk: How much is North Macedonia present in Bulgarian media?

IG: As a reporter for the news programs at the biggest and most viewed Bulgarian media, I’ve been covering Macedonia for the past 10 years and I think the ongoing political and social processes in Macedonia are very interesting to the Bulgarian public. Bulgarians are just truly curious about Macedonia and Macedonians. The historical bond determines apparent emotional ties. And local media realized that fact. That is the reason for Macedonia to be present quite often in the news flow in Bulgaria – with video and on-the-ground live reporting, as well as in-depth TV documentaries, written articles online, in the newspapers and all other form of contemporary media. Every other day there are news reports, dedicated to Macedonia. Which, according to my personal experience, is not the same with Macedonian media covering Bulgaria – they do it rarely.

However, in my opinion, the quality of the news reports from Macedonia has improved in the last 10 years and became more comprehensive and in-depth. First of all, the journalists, who cover topics in Macedonia, have now much better background and thus understanding of the political and social processes in the country. Local Macedonian authorities also opened themselves toward foreign media recently much more, compared to the time of Mr Nikola Gruevski governing as prime minister, for example. In addition, Macedonians themselves obviously got used to foreign media crews filming on the streets of Skopje. 10 years ago it was still an exotic view. This also adds to Bulgarian journalists working much easier on Macedonian soil.

Meta.mk: Is disinformation about Macedonia often present in the media? Can you quote some of the most common examples?

IG: I would not say often. As matter of fact, I can remember only a few fake news related to Macedonia which found place in Bulgarian media recently. The first and most blatant one was actually first published by Macedonian media outlets and later on reprinted by Bulgarian media, which didn’t make the effort to check the facts – it was in the spring of 2016, when local Macedonian media published information about a Bulgarian female tourist, who supposedly killed a swan on the Ohrid Lake by grabbing one of its wings in order to make a selfie photo. It was reprinted not only in Bulgaria, but in the UK as well. 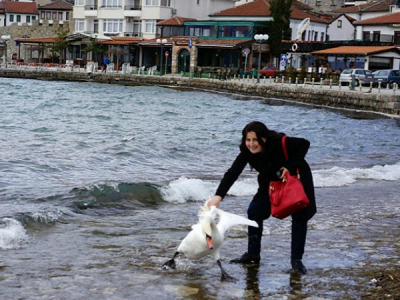 Ohrid Lake, the swan, and the tourist who supposedly killed it when taking a selfie. A Media Fact-Checking Service analysis details the spread of this disinformation. Photo by Nakje Batev, used with permission.

Later on we came to know that the tourist was not Bulgarian, but Albanian, and the swan was not killed. The animal was injured and recovered shortly after, fortunately. For those of us, who conduct meticulous content analysis of the Macedonian media, it was just an example of the long lasting trend of negative coverage of Bulgaria in Macedonia. It was, and still is to a certain extend, hard to find a positive story from Bulgaria (or related to Bulgaria) in Macedonian media outlets.

This predominantly negative image of the neighbors was part of the Macedonian political doctrine for many years. Its pinnacle was reached by the time it became obvious we are going to witness significant political changes in Macedonia some 3 years ago. Certain Bulgarian media outlets produced comprehensive coverage of the so called “journalist” Milenko Nedelkovski and some of his acts, regarding a monument in Macedonia, which is part of the Bulgarian heritage there, without taking into account (or simply neglecting) his affiliation to the previous Macedonian government and its “strongmen”. For those of us, who knew more about Mr Nedelkovski, his professional reputation and his history of acts toward political opponents, journalists and independent intellectuals in Macedonia, it was obvious that it would be wrong to put a sign of equality between him and Macedonian journalism. Furthermore, I know there is a new generation of investigative journalists coming up in Macedonia, whose work and efforts in the field should be respected.