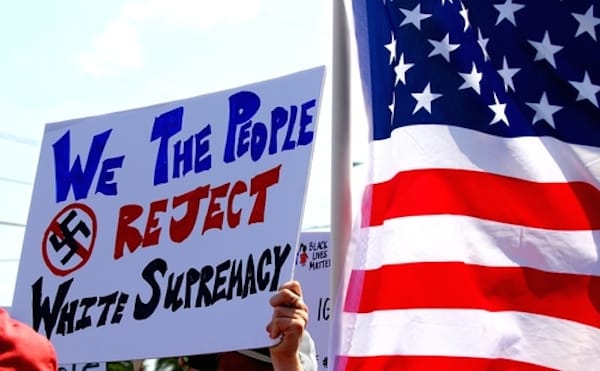 8.5.19: National – (Politics): U.S. President Donald J. Trump on Monday morning gave a virtuous speech that was largely incongruous to his consistent disposition as a racially-insensitive provocateur.

The president’s measured remarks were in response to the mass shootings in El Paso, Texas and Dayton, Ohio, which claimed the lives of twenty-two and nine, respectively. Mr. Trump reserved his voice not to speak lucidly about gun control – though he did say individuals who pose a grave risk to public safety shouldn’t have access to firearms – but rather to denounce a toxic culture which threatens the safety of Americans.

“In one voice, our nation must condemn racism, bigotry and white supremacy,” the president said. “These sinister ideologies must be defeated. Hate has no place in America,” he added.

Many Americans may be agreeable to the content of Mr. Trump’s scripted speech, but they are also likely to question which version of the president to believe. Indeed, the president who stood before the news media on Monday morning and spoke of America being a “loving nation,” didn’t sound like the 73-year-old man who irresponsibly pontificates about undesirable Mexicans invading the country.

There’s a reason 51 percent of American voters believe Mr. Trump is a racist: his repugnant rhetoric maligns and dehumanizes people of color and often echoes white nationalist propaganda. But in the case of Mr. Patrick Crusius, the El Paso shooter who authored an anti-immigrant manifesto before walking into a Walmart and open firing, the white nationalist propaganda echoes the president.

Mr. Crusius railed against Hispanics and immigrants for invading the country, taking away jobs from Americans and potentially turning Texas over to a Democrat stronghold. The shooter also used the term “fake news” for anyone who would dare link his hate crime to Mr. Trump.

Mr. Trump today blamed the El Paso and Dayton shootings, the latter of which has no discernable motive, on everything but himself and the inflammatory language he uses. It became clear halfway during the president’s speech that the materialization of a self-analysis was farfetched.

And while the president may have never explicitly encouraged anyone to commit a hate crime, his words and actions don’t necessarily dissuade it.

For example, in May, at a rally in Florida, Mr. Trump asked how to stop migrants at the border. An attendee in the crowd shouted “shoot them.” Mr. Trump responded flippantly: “That’s only in the Panhandle you can get away with this stuff.”

A mature president would’ve responded to that attendee with an unambiguous denouncement. Gun violence is no laughing matter, and the president should have said as much.

But he didn’t. Instead, he acted jovial, like a stand-up comic rather than the commander-in-chief.

It’s imperative that Mr. Trump grasp the severity of this unprecedented moment.

Mr. Trump mentioning white nationalism by name is a good first step. Because in order to defeat the enemy, one must first identify it.

But of more consequence than what Mr. Trump said today, is what he’ll utter or tweet tomorrow. And if history is any indicator, the high-minded president who today said he was outraged by the hatred, tomorrow will be the low-brow demagogue who appears to relish in it.

Facebook18Tweet2Pin2EmailShares22
wpDiscuz
0
0
Would love your thoughts, please comment.x
()
x
| Reply
Share this ArticleLike this article? Email it to a friend!
Email sent!