Get Daily Email
Join/Login CLOSE
Home / Featured Content / The Manly Pursuit of Desire: They Can’t All Be Swishers? 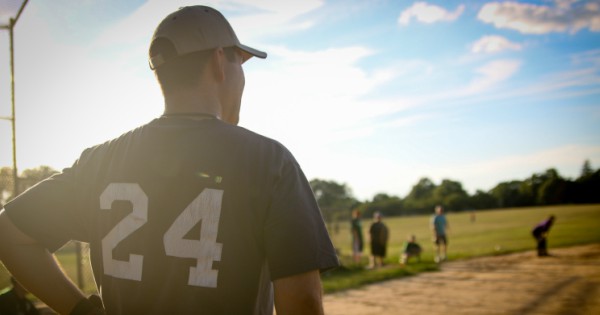 I live in the Riverdale section of the North Bronx, which means that I live four stops by Metro North commuter train from the new Yankee Stadium, which is definitely no longer the house that Ruth built. Babe Ruth who made $80,000 a year (and even waaaay back then, that was only so much money) could never afford any of the more toxically expensive seats in the new “Yankees,” as the stadium is called. When the stadium was built a couple of years ago for $1.5 bil (that’s a billion and a half bucks, kids) and a new stop was installed on Metro North, I and many of my neighbors had big fears: we could predict swimming in seas of beer vomit as the fans left, and the noise level on the commuter line which for generations was exceedingly genteel would be thunderous. Like gone-crazy wild.

So far, none of this has panned out. Not in the Online Age. I rarely see fans even tipsy: I guess the inflated cost of a beer at the stadium — like $7.75 for an eight-ounce cup of Budweiser — helps. As does the fact that Metro North has cracked down on drinking. But the thing I find most interesting is that there are multitudes of fans, armies of them, wearing Yankee pinstripe jerseys with their idols on them. Like thousands of god-identified Derek Jeters, as well as Freddy Garcias, Andy Pettites, Alex Rodriguezes — and of course, Nick Swishers. When I first saw a whole group of boys ranging from fourteen to twenty wearing outfielder Nick’s 33-number and jersey, all I could think was: They can’t all be Swishers?

So seeing all these regular-guy kids bearing someone else’s name and number bothered me. Did, at heart, they really want to mate with these big ball players — and they are big: that is one of the salient points of baseball players; you don’t see a lot of short stubby ones? It’s like they’d given up their identity to something they can never really surrender to, and surrender is of course one of the chief aspects of desire, and the main reason why straights have for so long despised us queer guys: that we, as a group, emotionally and sexually, surrender to other men.

And yet here I was, seeing it happen: all these kids want to take on the names and numbers of their idols — do they dream about them? I asked a fan once about Darryl Strawberry, the incredibly big and handsome Yankees outfielder who imploded as a player in a cloud of cocaine. He said, “If he was a girl, I’d marry him.”

I thought: Suppose you could marry him anyway? But desiring to keep my teeth in my mouth, didn’t say it.

One of the things I like about this period is that gay men are starting to discover sports, and are coming out of the closets as sports fans. I mean, the closet where queer sports fan used to stay. The New York poet Frank O’Hara once called ballet “Baseball for sissies,” and I remember when every gay party was aglow and aglitter with talk about opera divas and ballet stars (slugging it out over Callas vs. Tebaldi; Nureyev vs. anybody else) but no one talked about sports. Sports embarrassed us. Like a lot of queer men, I remember being the last one picked, the sheer fear of fumbling the ball, and the stinging scent of both fear and curiosity in the locker room. Still, as I got older and got involved with gay sports, like being on a gay volleyball team (where I was still last to be picked, but what the f*ck), I started to realize that competition itself can be deliciously sexy.

When I was 10 years old, I spent a summer playing baseball. My father who would die barely a year later of cancer, was in heaven. I had met an adorable boy whom I had a pre-everything crush on, and he was a Little Leaguer. So we’d go out and practice, even though I knew I’d never make Little League. I had no interest in it actually. But I discovered something: I had a great arm. I could pitch. I think it had to do with some kind of superior eye-hand coordination that a lot of gay guys have: if you can do excruciatingly difficult napkin-folding and needlepoint, you can pitch a ball. Later on, in junior high and high school, I stayed as far away from baseball as I could — it always seemed like the pitchers were seven feet taller than I was, and a lot bigger. I was a small kid; I actually grew about three inches after turning eighteen. Like a lot of gay guys, I became phobic about sports, and that is sad. Because there is something about the balls-out scruffiness of sports that, as a man who enjoys being one, I now really admire.

I find it full of my own deepest desires. Still, all those kids in the Swisher jerseys: what desires are they burying, or have they actually found them?

Photo by Lesly Juarez on Unsplash

Award-winning writer and gender-rights pioneer, Perry Brass has published 19 books, including poetry, novels, short fiction, science fiction, and bestselling advice books that you can read about at his new site for them: PerryBrassGaySelfHelp. A member of New York’s radical Gay Liberation Front, in 1972, with two friends, he co-founded the Gay Men’s Health Project Clinic, the first clinic specifically for gay men on the East Coast, still operating as the Callen-Lorde Community Health Center. His acclaimed prize-winning dystopian futurist novel Carnal Sacraments has recently been translated into Italian and Spanish, penning a world where privacy, a personal life, and a moral compass are worthless to a high-stakes consumerist society of both endless bullying and cosmetic rebellion. For more info: www.perrybrass.com.