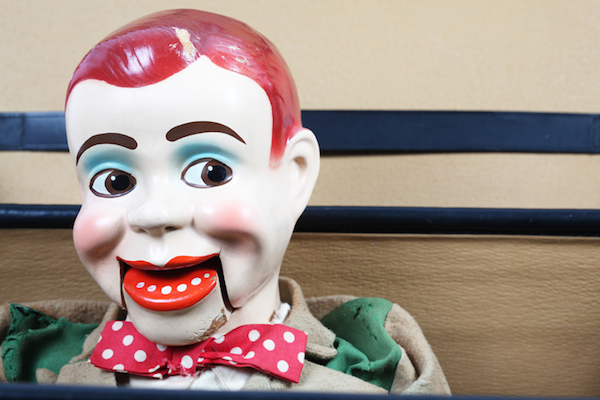 Listening to Trump’s third State of the (Dis)Union speech, if one believed it with all the obvious lies and misrepresentations, Trump is the greatest advocate for civil and human rights with a kind heart and a high sense of empathy and compassion, and one who has singlehandedly ushered in the greatest economy the United States – in fact – the entire world has ever experienced.

One recipient included ultra-conservative radio indoctrinaire, Rush Limbaugh, who feigned surprise as the fear and hate-mongering “leader” at the podium announced to all assembled that Limbaugh is the newest recipient of the prestigious Medal of Freedom – the highest prize awarded to a civilian — as First Lady Melania pinned it around his stiff neck.

Limbaugh is a verifiable racist as one of the chief architects of the “birther” movement challenging Barack Obama’s citizenship status and referring to his mixed racial heritage as “halfrican-American” and as “Barack the Magic Negro.”

The radio neo-nationalist arrogantly asked: “Have you ever noticed how all composite pictures of wanted criminals resemble Jesse Jackson?” And he said about the NFL: “The NFL all too often looks like a game between the Bloods and the Crips without any weapons.”

His legacy of misogyny rivals that of Donald Trump. Limbaugh coined the term “feminazis” to slander members of the women’s movement, and he called prominent women “sluts” and “prostitutes.”

He mocked and referred to Michael J. Fox, who has Parkinson’s disease, as a phony and a fraud.

In 1989, his suggestion to cure the AIDS pandemic was “do not ask another man to bend over and make love at the exit point. That’s what you don’t do.”

Limbaugh called out gay U.S. Representative and chair of U.S. House Financial Services Committee, Barney Frank, “the banking Queen.” And he said that Democrats will “bend over, grab the ankles, and say ‘Have your way with me.’” He also quipped that “When a gay person turns his back on you, it is anything but an insult; it’s an invitation.”

So then, why would anyone accept Trump’s speech at face value? But wait, who with any sense of reason would or could take anything Trump says or does at face value other than two-faced value?

In attempting to address this critical question, I created an analogy to a children’s fable.

We currently witness two major and several minor political parties throughout the U.S. The major parties comprise the varying left and center-left branches of the Democratic Party, and the former Republican transformed into the far-right lying Pinocchio Party.

Members of the Pinocchios, when they talk and then walk and turn their heads, their ever elongating petrified wooden noses function as heavy massive wrecking noses (balls) dismantling our nation’s essential and once vital governmental, social, religious, and financial institutions and the underpinning of our very democracy.

Regardless of verifiable evidence to the contrary, the maxi Pinocchio puppet clones (un)fact similes found scattered in bunches in the U.S. Congress, state legislatures, and upper echelons in the corporate, industrial, religious, and financial sectors, and the “mini hims,” as I term them, residing among the electorate mimic and obey their chosen and proudly acknowledged leader/master inhabiting the White House, the one who attached and now pulls their strings to march in synchronized lockstep.

But these puppets are no mere zombies instinctively searching for and devouring living human flesh. No, indeed not!

Instead, they have eagerly accepted and consumed the snake oil the orange headed White House puppet and brewmaster – carved and set into motion by the puppet Mastro Vladimir Putin Geppetto – concocted. They purchased the poison for the one-time non-refundable price of relinquishing their souls.

Ingredients mixed with the oil of snake by the conniving brewmaster includes undiluted and massive amounts of patriarchal neo-national white supremacy with equal parts of all the other forms of oppression and subjugation, plus low information, alternative “facts,” deception, deceit, diversion, division, psychological projection, narcissism, social pathology, grievance politics, demands for loyalty and sabotage of world alliances, vilification of people attempting to escape violence and poverty in their native lands, demonization of Muslims of all denominations, and other toxic substances the Food and Drug Administration would never (hopefully) approve and list on the side of package labeling for human consumption.

Like zombies, however, following consumption of the toxic mixture, the user loses all capacity of critical thinking and questioning the master puppet and his creator/carver of reason and logic. They lose the ability to differentiate truth from exaggerations and lies, and right from wrong.

We have many examples, coming from the higher visibility and ranking maxi members to those lower down from the mini minions of the MAGA world, who ingested the blended oil of snake potion as a testament to its toxicity to our governmental, social, financial, and religious institutions and to our very democracy.

But for those who have only ingested occasional brief sips and have not yet irrevocably petrified, there remains a chance to wean off the White House brew master’s poisoned oil of snake and retrieve a diminished but potentially fully recoverable reasoning faculty.

These are the moveable middle who can still reconsider from forever relinquishing their souls to Orange Pinocchio’s potent lures of economic, social, and physical security – lures he neither intends to nor can enact.

Unfortunately, we have witnessed many within the maxis and minis of the MAGA minions whose chances to return from perpetual petrification remain virtually impossible.

In all likelihood, Orange White House Pinocchio will never ever become a real boy!