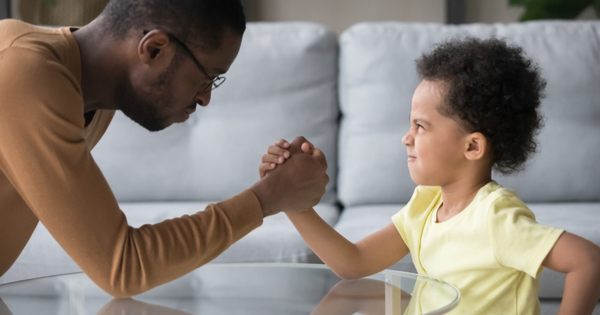 A few weeks ago, my eldest child did something that made me quite upset. But to be honest, looking back on it now, I cannot even remember exactly what it was.

As parents, we have to discipline our kids on a regular basis to varying degrees so keeping track of every occurrence could take up this whole article. But I do know he did something that made me mad enough to stop doing the dishes, call him into the kitchen and angrily reprimand him.

I didn’t even see the incident. I just overheard him “arguing” with my wife in the other room, essentially defending something wrong he had done. Hearing him talk back rather than own up to what he did when he was clearly in the wrong just really got to me in that moment. Once I spoke with him for a few minutes and I felt he understood why I was so upset, I sent him to his room for a time out. Looking back, I am not I am not proud of how I behaved, but we will come back to that later.

I often give Justin, my eldest, a bit of a hard time when he does something wrong mainly because he is a smart kid and I know he knows better. He does well in school, has lots for friends and his teachers have nothing but great things to say about him. He is also the oldest. His 4-year-old twin siblings see him as a role model, copying his every word and action, right down to the way they eat their food and brushing their teeth. But like most first graders, Justin can be impulsive. He doesn’t always take the time to think about the domino effect of his actions. But that’s part of our job as parents, right? To steer them in the correct direction and drop pearls of wisdom they will hopefully pick up and bring out again in those moments when we are not around to guide them.

After I finished the dishes that night, I felt a sense of dread and sadness as I replayed my interaction with Justin in my head. I had no doubt he had done something wrong and that discipline was warranted. But, more importantly, I realized I was in the wrong, too. I had overreacted. I had raised my voice, pointing and shaking my index finger at him. This must have been very intimidating, standing over him while he had to absorb my anger.

An apology for the ages

I had every right to discipline him, but I could have done so in a more loving and gentle way. I could have gotten my point across without raising my voice or making him feel small. I thought about the times my parents would have loud arguments in front of me about a variety of issues, but would always to apologize to me for their actions because they knew this is not the type of thing they wanted their son to see. More importantly, this was not the type of behavior they wanted me to engage in if I should every marry and have my own children. So I knew from early on the power of the apology.

After a few minutes, I called Justin back into the kitchen. I got down on one knee so we could be eye-to-eye. He wasn’t crying, but I could see he was still upset.

“I’m sorry. I overreacted,” I said to him. “I know you are a good kid and I just want you to make smart choices. I should not have yelled at you like I did and I’m sorry.”

I wasn’t expecting a response.

But Justin looked at me, patted me on the shoulder, smiled and said, “It’s OK, Daddy.” Then he went about his day as happy as ever.

My heart melted because he could have stayed mad. Instead, he accepted my apology in a mature way and moved on with ease to his next adventure.

What I didn’t know was that my wife was in the hallway. She overheard the original incident and she heard my apology. She came into the kitchen and said, “Thank you for doing that.”

I say all this because it seems that we, as a society, have become increasingly enamored with doubling down when we are faced with facts or confronted with the truth. Rather than admit being wrong, learning from it and moving on, we dig our heels into our position and fight no matter how many facts eat away at our argument.

And my son being wrong in one moment does not give me the right to be wrong in another with how I discipline him and give into my emotions.

As parents we have to teach our children right from wrong on a daily basis. That starts with not only knowing when we are in the wrong, but also being willing to admit it without shame. We may view ourselves as the final word in our respective households, but we are flawed and are far from perfect. We make mistakes. We must remember that we are the role models our kids, and sometimes even other parents, will look to. As the saying goes, if we don’t learn from our mistakes we are destined to repeat them.

Apologizing when you are wrong doesn’t make you weak or soft. It makes you human. We should not offer an apology because we want forgiveness. We should apologize because it is right, no matter who or how old the person we did wrong is. The minute we recognize that as society, we will start moving towards a more understanding and a more honest way of living and growing together, flaws and all.

coolminivandad (aka Vernon Gibbs II) is a stay-at-home dad living in the great state of NJ with his wife and 3 kids, 3 year-old boy/girl twins and a 5-year- old son. He is a tired Giants fan, a weary Knicks fan, and chooses Marvel over DC any day of the week. He loves to blog, draw, play the occasional video game when his kids are sleeping and occasionally make fun video with them for You Tube. In addition to writing for his own blog, he is a writer at Fathers of Multiples http://www.fathersofmultiples.com/ and has written for The Washington Post