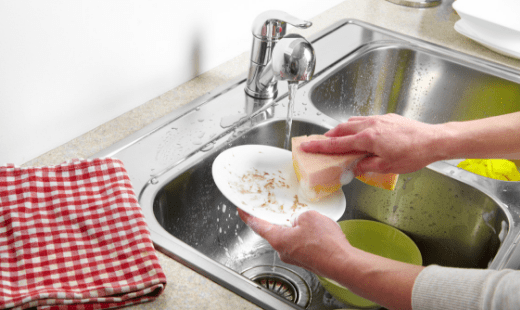 It wasn’t hard to spot the guys barreling toward divorce.

The message was camouflaged in symbolism, so it makes sense to me that the point was lost on all the cretins. Most critical responses to the “dishes” post were rooted in a fundamental misunderstanding of what was read.

A bunch of potentially well-meaning people internet-yelled: “OMG!!! She left him over dirty dishes!!! What a control freak!!! Don’t sweat the small stuff!!! LOL!!!”

I’m not disagreeing with them. I just can’t believe real-life human beings with functioning brains read that post and came away with: “Yep. It was literally about dirty dishes, just like the headline said!” But I was taught in my journalism classes to write for an eighth-grade audience, and those responses help explain why.

Once I’d reached a certain frustration threshold, the immediate two minutes or so following a new comment like that were moments when being lobotomized or murdered seemed kind of awesome.

The most troubling comments came from married or formerly married men.

“I’m going to divorce my wife for making me read this crap!” or “So what you’re saying is men need to just agree to do whatever our wives want because of their ‘feelings’ no matter how irrational we consider them, and if we don’t, we’re assholes and bad husbands!?” or “Women are NEVER happy. If you start putting the dishes in the sink, then they will just find something else to complain about!”

This is my big-picture and oft-repeated theory on modern-day marriage: Good men can be bad husbands. Good men can accidentally hurt their wives. Husbands and wives slowly, imperceptibly slowly, push each other away one conflict at a time. They, because of uber-complex and misunderstood emotional, psychological, biological, chemical, etc. differences, can both experience the same event, describe it MUCH differently afterward, without either of them being wrong.

Maybe the guy sees a dish. Nothing more. No big deal!

And maybe his wife sees a blatant act of disrespect consistent with his other house-cleaning habits; and the way he criticizes her taste in music and things she wants them to do together on weekends; and the way he wasn’t there for her after she miscarried two years ago; and the way he’s never assertive in family and household management, leaving all those decisions to her, but shooting down her ideas every time it’s not what he wants to do; the way he expects her to know where one of his shirts is because he hasn’t done a load of laundry in four years, nor said ‘Thank you’ for not having to; or the way the two kids have homework that needs done, and little league games to be shuttled to, and special uniforms and outfits that need washed, and permission slips that need signed, and school lunches that need packed, and doctor appointments that need scheduled, and wedding RSVPs that need sent in, and gifts that need bought for that event, and how he always expects her to do everything just like his mother did for him and his dad growing up.

I believe most marriages end because of husbands who are unable to make that connection.

That something “stupid” and “petty” and “meaningless” like a dish by the sink can produce very painful feelings for his wife.

It doesn’t actually matter what the thing is. The specifics are irrelevant. One thing matters, and it’s the difference between happy marriages and shitty ones, or forever-marriages and divorce.

This: “When [insert thing here] happens, my partner and I feel very differently about it. Sometimes, I never realized it was even a thing to worry about because it seemed so innocuous to me. But now I understand that [thing you inserted] is meaningful to my partner. Because of how much I love and respect them, I am going to pay attention moving forward and demonstrate that love and respect.”

In what was perhaps a misguided attempt to explain the deeper meaning of the “dish by the sink” to male readers who were offended or totally missed the point, I offered the second half of my modern-marriage theory:

I believe that men understanding this dynamic and demonstrating concern for their wives’ emotional health through these tiny acts of love and respect, or by adjusting certain habits at home, will discover that their wives WON’T do many of the things husbands often complain about, like “nagging, bitching, overreacting” etc.

I think the “nagging,” “bitching,” and “overreacting” is a direct result of the emotional pain their wives feel. Because the husbands aren’t affected emotionally by things that their wives are complaining about, many dismiss their feelings and opinions.

There’s a dish by the sink, and she’s pissed.

All he can think is: “Ugh. How can she be so damn petty? I NEVER complain about shit like this, so she shouldn’t either. She’s totally unfair and irrational.”

He doesn’t think his wife’s opinion about the dish is valid, so he dismisses it and never thinks about it again until he repeats the same process the next time his wife nags him about some “meaningless” thing.

Some of these guys are assholes. I promise I know that. But I don’t believe most are. I think these are mostly good guys who literally don’t realize they are inflicting emotional damage on their wives. They are simply sticking up for themselves in a way that makes sense to them, and waiting in vain for the day when their wives realize “the little things” aren’t worth fighting over.

They miss the entire point.

The little things ARE the big things.

Because of all of this, I believe men in a lot of ways are in position to fundamentally change the culture of marriage. I think if men entered marriage with a demonstrable mental grasp of this “dish” conversation, the relationships would never deteriorate to the point where “the little things” piled up into love, sex and marriage killers like they do now.

But What About the Guys That Are Good at Marriage?

That question blew my mind.

I don’t know what good marriage actually looks like. Which is why I reverse-engineer it. I know what bad marriage looks like. Combine that with reading more personal marriage and divorce stories in my email and blog comments than most counselors and therapists will hear in a lifetime, and—right or wrong—I feel like I have a high-level understanding of how all this goes down.

That’s why I was thrown by one husband’s perfectly fair question: “What if I do all of that shit, and she STILL sucks?”

It made me stop and think. I can’t prove that guy is, objectively speaking, a good husband. But I’m a huge believer in math. Statistically speaking, there are some really great husbands out there. And some percentage of the time, they are probably married to monumentally shitty wives.

Let’s deal with some scary truths.

Every person who has been betrayed first trusted someone they shouldn’t have trusted.

We all have inconvenient thoughts and desires we bury way down deep and never talk about.(I don’t mean criminally deviant stuff, even though that is presumably true for some people. The thoughts don’t have to be “dark” necessarily. They can just be a common and naturally occurring sexual fantasy that everyone has, but since you’re married it’s a little bit inconvenient and a lot wrong. I know you get it. Don’t worry, I won’t tell anyone.)

We’re all pretty selfish when our self-preservation instincts kick in, or even in everyday occurrences when the innocent actions of another negatively impact something we want to be doing.

We don’t know what goes on inside the hearts and minds of other people, including those closest to us, unless they share it.

At some point, we have to leave people to take responsibility for their lives and hope they’re being honest with themselves and others about it. It’s mostly out of our hands.

We should all have clearly communicated boundaries. Boundaries that are fair and reasonable and mutually agreed upon with those we have relationships with.

We should all enforce those boundaries with fair-mindedness and forgiving hearts.

Thus, we should all be able to recognize the Point of No Return.

When the line has been crossed one too many times, we should know it. Divorce shouldn’t be a cowardly escape for fear of self-sacrifice or an unwillingness to compromise. It should be in response to a clear and blatant and intolerable violation of marriage vows and those clearly communicated boundaries.

We all have those moments in life when we’re lying in bed in silent darkness, or driving to work, or standing in the shower. Where we are in some way face-to-face with the Real Us that no one else has access to.

“What if I do all that shit, and she STILL sucks?”

We’re often afraid to take responsibility for life’s biggest and scariest choices. But—face it—there’s only one person who can answer that.

Originally appeared on Must Be This Tall to Ride.