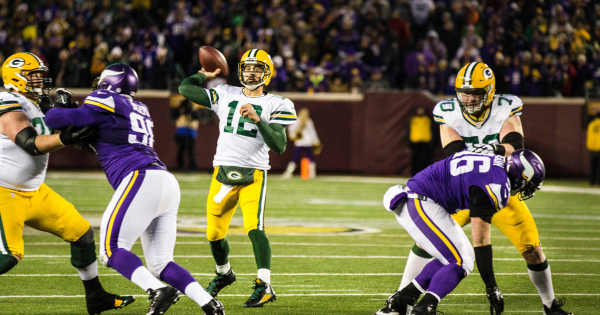 Aaron Rodgers has no words of confidence or comfort for Packers fans, and that is both telling, and frightening. It means he knows there’s something wrong. In the past, it was “That was a bad game, but I can see where this is going, so don’t worry.”

Today we hear clichés like, “We need to execute our plays better.” That’s the stuff of rote quote memorization; the kind of thing you get watching Crash Davis coach Nuke LaLoosh on giving interviews. It’s background noise. Stuff players say when they have nothing of value to add to the conversation.

The problem is: though he is speaking in soundbites, the truth is in Aaron Rodgers’ eyes. His voice says one thing, his eyes say, “The team is in trouble. There is a problem, and I either don’t know how to fix it, or I can’t talk about it publicly.”

There is one month left in the regular NFL season. Packers fans and General Manager Brian Gutekunst, however, are already thinking about the offseason, because that’s where we’re at.

The Packers season is over.

It has been for several weeks, but the thumping by the Minnesota Vikings on November 25th solidified it. What’s left? A desperate hope for a strong finish and a Wild Card game where the Packers are destroyed by a team that completely overpowers them?

No, the best thing to do today is to cross our fingers for the future and wonder what changes will be made and what meetings will be had in order to right this listing ship.

As a fan, the fear is that the Packers are fast becoming another Cincinnati Bengals; a team the fans love, but who just can’t seem to get their shit together. Thus, upper management allows the team to putter along on cruise control, milking the fans they know will return year after year, stretching thin the promise “Next season it will all be better!” and breaking hearts all over again when it isn’t.

In both 2013 and 2017, the easiest go-to excuse was, “Well, the Packers were stuck with a backup quarterback; Rodgers was injured.” Meanwhile, the Patriots won games with both Matt Cassel and Jimmy Garoppolo substituting for Tom Brady. That shows a winning system that doesn’t entirely rely on their A-list quarterback.

Also, even with Aaron Rodgers healthy, the Packers haven’t been to a Super Bowl since 2011.

In that same span, the Patriots have been there 4x, and both the Seahawks and the Broncos have been there twice. You can talk about the different divisions being easier or more difficult, or you can examine cultures.

Which leads us to Mike McCarthy.

Mike McCarthy deserves credit for his tenure; he’s got a winning record. But if The Dark Knight taught us anything, it’s “You either die a hero, or you live long enough to see yourself become the villain.”

Mike McCarthy has become the villain.

Fair, not fair, it simply is. And it has to be addressed, because perception is reality, and once you’ve lost everyone’s faith and trust, that’s a problem.

Some people think McCarthy deserves to stick it out. He’s got the winning record, as well as one ring on his fingers. The truth is, the Packers survived the loss of Holmgren, and they can survive the loss of McCarthy. It’s time to move on.

The question is: will the Packers’ leaders realize this in time, or will they let McCarthy limp along like Marvin Lewis, doing just good enough to not get fired, but never good enough to excel or be great?

Will anyone blame him?

Actions speak louder than words. Right now, Aaron Rodgers isn’t saying much. If the Packers don’t make the right actions come spring 2019, maybe Rodgers will have to act on his own best behalf.

Photo by Tim Mielke on Unsplash

Facebook6Tweet4PinEmailShares10
wpDiscuz
0
0
Would love your thoughts, please comment.x
()
x
| Reply
Share this ArticleLike this article? Email it to a friend!
Email sent!