Get Daily Email
Join/Login CLOSE
Home / Featured Content / The System Was a Steroid: Race, Performance Enhancement and the Baseball Hall of Fame 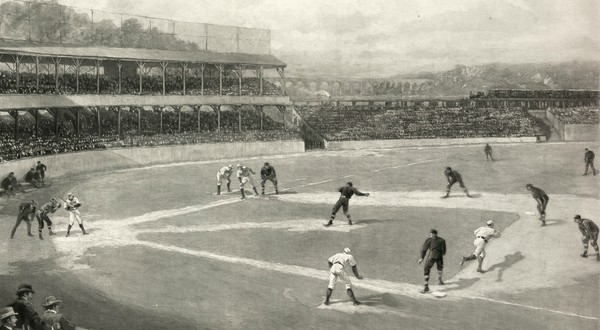 —
Another year has come and gone, and with it, voting for the next crop of Baseball Hall of Fame inductees. And as with the last several years, Barry Bonds and Roger Clemens — two of the finest players to ever play the game — have failed to garner the requisite votes for admission because of their use of performance-enhancing steroids for several seasons of their illustrious careers.

So be it. I understand the hesitation to extend a Hall of Fame stamp of approval to those who technically cheated. And yet, amid all the consternation about steroid use and how it enhanced the performance of certain players in the late ‘90s and early 2000s, a few things have been conveniently overlooked.

We never question the accomplishments of those with names like DiMaggio, Williams, Ruth and Cobb, who benefited from a much greater “performance enhancement” than that which steroids can provide: namely, the racist exclusion of black athletes from the major leagues.

First is the simple fact that in the case of players like Bonds and Clemens, steroids were hardly what put them into consideration for the Hall. Even without them, Bonds would have likely ended up among the top three home run hitters of all time — if not surpassing Hank Aaron and Babe Ruth — and Clemens would have finished his career as one of the greatest pitchers in history. So putting aside the ethicality of their steroid use, their talent would most assuredly have gotten them into the Hall of Fame anyway.

But the bigger issue is this: How do we understand “performance enhancement,” and what counts as among the contributors to this phenomenon? For whatever we might say about Bonds, Clemens and others in the steroid era of baseball — all of whom were competing against other players, often equally juiced — it seems instructive that we never question the accomplishments of those with names like DiMaggio, Williams, Ruth and Cobb, who benefited from a much greater performance enhancement than that which steroids can provide: namely, the racist exclusion of black athletes from the major leagues.

So for instance, while we can’t know for sure whether or not Bonds’s home run spree in the years from 1999 to 2003 was due to steroid use, or whether he may have hit the same number even without them, we do know one thing for certain: from 1887, when blacks were run out of white-dominated professional baseball leagues, until 1947, when Jackie Robinson first stepped onto the field for the Brooklyn Dodgers, every white baseball player for six decades had been protected from black competition. And protection from competition is the most profound form of artificial performance enhancement imaginable — the ultimate systemic steroid.

It was none other than Joe DiMaggio who said — having once faced Negro League great, Satchel Paige, in an exhibition game — that Paige was the greatest pitcher he’d ever come up against. But of course, in DiMaggio’s 1941 season, during which he hit in 56 consecutive games for the Yankees, he wouldn’t have to face Paige, or any other black pitching legends. Though Paige would go on to play in the majors, it would only be after reaching his 42nd birthday, and a full fourteen years after his legendary 31–4 record in 1934, during which season he pitched sixty-four consecutive scoreless innings and won twenty-one games in a row.

That black players were fully the equals of their white counterparts is hard to deny. Throughout several exhibition games involving each league’s All-Stars, the two leagues split games roughly fifty-fifty. Considering that the Negro League teams had fewer resources to develop players and typically carried smaller rosters, this was no small feat. Had black players been allowed in the majors, there is little doubt but that white record holders, then or now, would have faced longer odds when it came to recording their feats and this may well have affected their Hall of Fame aspirations.

Pitchers like Smokey Joe Williams (who shutout the 1915 National League champion Philadelphia Phillies in an exhibition) or Paige (who was able to pitch three shutout innings in the major leagues at the age of 60, in a special 1965 appearance with the Kansas City A’s) would have wreaked havoc with the bats of white players had they been given the chance.

By the same token, sluggers like Josh Gibson, Buck Leonard and Oscar Charleston (who hit .318 with 11 home runs in 53 exhibition games against white major leaguers, and is considered the fourth best player in history by baseball historian Bill James) would have easily vied for many of the records set by whites, some of which stand to this day. This would have been especially true had they been able to play in homer-friendly Yankee stadium, which originally had a right-field home run fence less than 300 feet from home plate — regularly reached by talented 15 year olds — so as to accommodate the likes of left-handed slugger Babe Ruth.

One thing is certain: all of the records and accomplishments of white players prior to 1947 are tainted. Any time someone is protected from competition (be it an athlete or corporation), the one who is protected gets to shine, without having to prove themselves against the full range of possible talent. Yet no one questions their placement in the Hall of Fame.

And yes, I know the rejoinder. Confronted with the argument that maybe Williams, DiMaggio, and especially Babe Ruth wouldn’t have been as good had they been required to play against black players, most fall back on the argument that Bonds, Clemens and their steroid-enhanced contemporaries broke the rules, while Ruth and company merely played within the boundaries of the rules as they existed at the time.

In other words, while shameful, segregation was “just the way it was.” The implicit argument here is that we shouldn’t lower our estimation of white players due to segregation since they weren’t the ones who enforced the color barrier, but rather, just played by the rules as they found them.

But this argument is morally problematic on a number of levels. First, it suggests that if the rules themselves codify unfairness and cheating they are acceptable, and that it’s only when one cheats by breaking a rule that something is amiss. Additionally, to say that segregation was “just the way it was,” implies that we are under no obligation to challenge injustice unless we ourselves created it, and that if we collaborate with it, we bear no moral responsibility for its perpetuation. But what kind of moral standard is that?

By that logic, folks who stood by and remained silent during Jim Crow, during lynchings, during the Holocaust of European Jewry or American Holocaust of indigenous persons, did nothing wrong. By that logic, we should teach our children that whenever they see an injustice, so long as it benefits them, they should go along to get along. But any parent who taught their kids such a thing would be shirking their responsibilities as a moral guide.

The truth is, had even a handful of the top white players refused to play until the major leagues were integrated, it is almost certain that the color barrier would have fallen more quickly. After all, it was in large part because of the demands of 19th century great Cap Anson, a player-manager, that blacks were booted from the game in the first place. Players did have power. They were the ones fans came to see and for whom they paid good money. There is no way baseball could have remained all-white if Babe Ruth or Lou Gehrig had said they were sitting down until blacks were allowed to play.

In other words, whites, by knowingly protecting themselves from some of the game’s greatest players, “cheated” every bit as much as Bonds and Clemens did via the use of steroids. That the method for cheating was institutionalized, so that the rules themselves amounted to fraud, and that racial cheating was given the imprimatur of law hardly provides moral cover for the practice’s ethical failings and the failings of those who took advantage.

The bottom line is, we revere the baseball talent of the Jim Crow era and rarely even think about how those players would have measured up in a fair and equitable game. We praise the accomplishments of the 1927 Yankees, even though in terms of sheer strength and talent they pale in comparison (no pun intended) to any of the top five or six teams in the majors now, due to better conditioning routines if nothing else. And we idolize Ruth, who for all of his real power and talent was an out of shape drunk, many of whose home runs were hit in a stadium with fences set at a distance more appropriate for high school kids.

But even saying that — an inarguable truism, debatable by no one remotely familiar with Ruth, baseball or evidence of any kind — will invite overwrought attacks by racists and nostalgists, unable to separate their blinkered sense of history from reality. These are the same people who threatened Hank Aaron when he approached Ruth’s home run record, because deep down they knew their pudgy white God had been bested by the black man who had faced far greater odds (and incalculably greater pitchers) than Ruth ever dreamt of.

Whatever you think of Bonds, Clemens, and others from the steroid era, so be it. But it seems to me that we should view all players — either from that era, or the era of segregation — on their talents alone, because the case can be made that there was performance enhancement in both.

Would Ruth, DiMaggio, Cobb and Walter Johnson have made the Hall anyway, even without white privilege? Of course. They were great ball players. But so too would Bonds and Clemens have made it without steroids. And to hold the latter to a higher standard than the former is unfair. What’s more, it demonstrates how quick we are to dismiss the impact of white supremacy and relegate its consequences to some peripheral part of our consciousness, rather than grappling honestly with its history and impact.

Either Bonds and Clemens belong in the hall, or none of those who played before 1947 do. Take your pick.

Facebook13Tweet4Pin1EmailShares18
wpDiscuz
Share this ArticleLike this article? Email it to a friend!
Email sent!