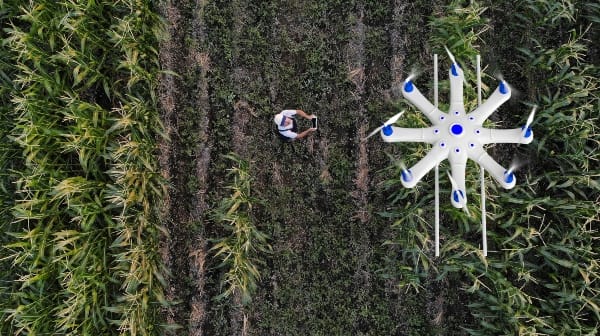 The drone image that Irina Fedorenko brings up on her computer screen is deceptive at first: a bird’s-eye view of sparsely treed terrain, threaded by winding, sand-colored pathways. She zooms in, and the unmistakable shape of a boat becomes clear, paddled by two people along one of many narrow streams in Myanmar’s Irawaddy Delta.

Fedorenko is the co-founder of Biocarbon Engineering, a U.K.-based ecosystem restoration company, which took the aerial photograph. “This is an example of the mapping we do before every project,” she says. “You can see every tree, every blade of grass. And this here is mangrove.”

Switching to a satellite image of the same area, those details disappear. But another move of the cursor switches the image again, this time using the normalized difference vegetation index (NDVI) to show colored swatches of vegetation. “Blue is mangrove, yellow is grass,” she says.

The distinction is an important one. The 500-hectare piece of coastal land has been given to the families of a nearby village, also visible in the photograph, by the Burmese government on one condition. “If they turn it into a forest,” she says, “then it stays with the community. If they don’t take care of it, the government takes it back. So when they are restoring it, we can actually show the government the clear change in biomass.”

Fedorenko’s aerial images are just one example of how drone technology is playing an increasingly vital role in society. Originally developed by the U.S. military for reconnaissance and surveillance purposes in the 1950s, drones – formally known as unmanned aerial vehicles (UAVs) – are a broad range of aircraft that can either fly autonomously or be piloted remotely. While commonly seen in the hands of hobbyists, they also serve a growing variety of commercial and scientific functions, including aerial photography, search and rescue, package delivery, and fertilizer and pesticide application.

From mapping and monitoring landscapes to planting seeds and measuring carbon, drones have become a highly useful tool in conservation as well. They can identify wild animal poachers, illegal logging, mining waste run-off and, by attaching different kinds of hardware – such as devices for the ultra-useful laser-mapping technology known as LiDAR – estimate carbon storage by measuring the types and sizes of trees in a forest. As drones continually become smaller, cheaper, easier to use and more advanced, they’re flying toward becoming some of the most accurate and dexterous eyes forests have.

For most of his career, when Center for International Forestry Research (CIFOR) principal scientist Yves Laumonier wanted to check the accuracy of a vegetation map, he had to spend the entire day investigating on foot. “Now,” he said, “I can send the drone, and in 20 minutes, I know.”

Laumonier first began using drones in his research in 2016. Members of his science community were skeptical about drones at the time, he said in an interview with Forests News, but the results of a study he carried out in Indonesian Borneo that year turned doubts about drone ecology into enthusiasm.

Aside from saving time, Laumonier was sold on drones for their many efficiencies. They could fly below cloud cover that would otherwise block satellite imagery; they could take high-resolution photos; and they could monitor highly complex landscapes, such as mosaics of fallows, gardens, crops and forest.

Alexander Watson co-founded OpenForests in recognition of another efficiency as well: cost.

Based in Krefeld, Germany, the 2011-founded company uses drones as a means to map and collect data on forests to feed into better management practices, particularly in the developing world.

In the past, says Watson, the cost of acquiring data on forest makeup has contributed to what he sees as “a harmful oversimplification of forest ecosystems, leading to deserts of susceptible tree monoculture.” But with drones becoming better, cheaper and linked to more easily transmittable data software, they can help forest projects stay within budget while gathering the detailed information they need to create landscapes that are as sustainable as possible – socially, environmentally and economically.

This comes through projects using drone-collected data to inform the best ways to plant multiple species in a landscape, keep to traditional land-use models rather than bringing in new ones, and lease rather than buy land from local communities. In other words, the complicated local landscapes that Laumonier uses drones to monitor can also be recreated to some degree with the help of these devices.

“Drones can help reduce management and information costs, which used to be quite high and inhibited some organizations from going into more diverse, more sustainable economic approaches,” he elaborates. “If it’s the same cost to do an inventory for a mixed tree plantation as for monoculture, then why shouldn’t we take all the benefits of mixed forest stands with all its ecological synergies?”

Cape Town-based photographer Johnny Miller says mapping “is where most of the money is, being able to map quickly, often, and cheaply – and with a small footprint as well.”

In 2012, Miller co-founded africanDRONE, a grassroots network of drone owner-operators that now stretches over more than a dozen African countries. Like an Uber for drones, it connects people needing mapping or monitoring services with drone pilots.

“But I think it’s much bigger than that in the sense that everyone’s pulling together,” he says. “Everyone sees the value of African drone pilots coming together into a system where it doesn’t matter what you do or what scale you’re at. You can be part of something larger than just your little local association.

“More and more people are trying to work more ethically in places like Africa,” he adds, “so we are trying to position ourselves as the ethical alternative as well.”

Probably one of the most innovative applications of this technology is Biocarbon Engineering’s seed-planting drone. Using technology the company developed itself, these drones use air pressure to shoot pods of seeds in biodegradable material into the earth. It’s not only faster and more cost-effective than sending out teams of planters with shovels and seedlings but also capable of replanting steep and inaccessible terrains.

Such features have won Biocarbon Engineering contracts to restore fire-ravaged forest in the Canadian province of Alberta, for example, and to begin an ambitious project to bring back mangrove forests in Myanmar. Last year, the Burmese government hired the company to carry out a project to restore mangroves after Cyclone Nargis ravaged coastal communities and killed 140,000 people.

“We covered 10-hectare pieces of land in five different locations with different techniques,” says Fedorenko, “with the same survival rate they achieve normally by human (planting).”

Now, the country has allocated another 50,000 hectares for restoration, “so we have the possibility to plant 200 million trees. The land is there, the seeds are there. Now we are raising money to pay for it.”

The use of drones in the environmental sphere is stretching farther and wider. For instance, in Dar es Salaam, Tanzania, africanDRONE co-founder Frederick Mbuya has been mapping the continent’s fastest growing city to identify wards most prone to flooding. Supported by the World Bank’s Global Facility for Disaster Reduction and Recovery, the project puts timely risk information in the hands of ward authorities to help them allocate resources more effectively.

Miller, meanwhile, has been using his drone for journalism, taking aerial photographs that can illustrate far better than words the effect of a mining spill on the environment, or the highly unequal status of urban areas where a massive slum sits next to a verdant and exclusive golf course.

“That’s game-changing,” he says. “That’s really democratizing the space as far as understanding the world around us. It’s a revolution in technological democracy.”

A mining site in Central Kalimantan, Indonesia. Courtesy of OpenForests and Fairventures Worldwide
Such contentious landscapes can be risky for using drones, says Laumonier, as companies or governments might not want the happenings on the ground to be photographed or exposed.

Nevertheless, these areas are where drones are perhaps needed most, and in fact bring work to africanDRONE, with its pilots being hired to provide surveillance. In South Africa, drones are often used for photography and surveillance of areas where poaching, illegal logging activity, and encroachment into forests by mining or other industrial companies is going on.

So how can local communities in the developing world – the people most impacted by encroachment and environmental degradation – seize the opportunities offered by drones?

“That’s the million-dollar question,” says Fedorenko. “So think Myanmar. It’s one of the world’s most vulnerable climate countries and has a poor population: fishing villagers who really need mangroves to protect them from the sea, stop agricultural runoff, and develop crab and shrimp farms. The benefit from mangroves is amazing. But they are not in a position to pay for it. So someone has to pay and that is the roadblock.”

Like Biocarbon Engineering, OpenForests provides its services to a mix of NGOs, governments and companies seeking to honor their corporate social responsibility mandates.

Some global companies have begun using drones on their own accord as well, such as Montreal-based paper products behemoth Domtar, which uses them to survey seedling survival to improve its Forest Stewardship Council certification compliance and monitor forests for insect infestation.

Yet even if it’s outside organizations contracting or using drone services, the payoff for local communities is already evident.

“Especially in NGO programs,” says Watson, “it’s important to create awareness for the entire project so that people recognize themselves as part of it.” With drones, he adds, NGOs working in restoration or land tenure issues have a tool to monitor progress, and this is helpful when seeking more financial support.

“They can see that the seedlings have been planted,” he says. “All the projects we have been working with have been tremendously successful because they were always the only projects that could show and give evidence of their progress.”