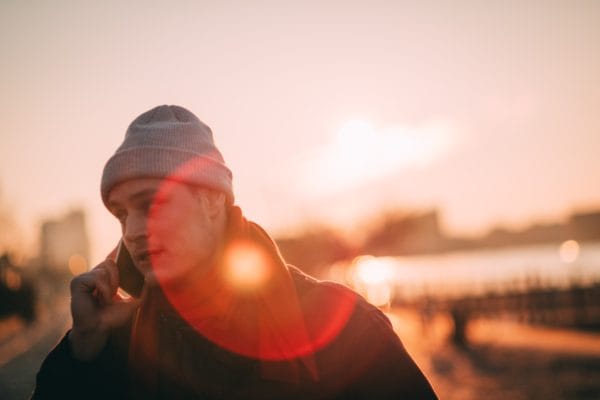 But there’s a difference between a conversation and really connecting with someone. Lots of men talk, lots of men listen too. But that experience of connection comes from something more than a conversation. I think a better way to say it is sharing oneself.

One in eight men in the UK have experienced a mental health problem. Three out of every four suicides are men. (Movember)

Sharing oneself takes courage, because it’s about self-disclosure. This is a process of communication where one person reveals information about themselves to another. It builds trust. It’s also one of the indicators of an intimate relationship. So why does the idea of sharing seem a little different between men? Why can it feel a whole lot more difficult between men?

After a sperm test where I had zero percent normally formed sperm, three failed rounds of IVF, feelings of rage, frustration and sadness, I found myself questioning myself as a man.

My interest in masculinity came into focus when confronting these facts about my fertility. The interesting thing is that there was (and continues to be) very little support for men in the area of fertility. It seems as if people are spectacularly silent about the whole issue. I started to share how I feel. Starting in late 2015, I’ve written about it, been interviewed about it for a national newspaper, and talked about it on national Radio and TV.

At the core of it all though, sharing myself with family and friends is my best source of support.

People around me have alluded to my sharing as emotional incontinence. I prefer to think of it as emotional awareness and emotional responsibility. To me, it’s more emotionally responsible – responsibility in the sense of taking ownership – to do share myself as I cry or experience being angry.

From my experience of the male fertility community (and participating on a Facebook support group of 800+ men dealing with fertility issues), it’s not that men don’t want to talk and it’s not that men aren’t able to talk. I’ve felt it’s more subtle. There’s no space.

I feel there’s no room for men to share with each other. On this Facebook group, one guy posted “where do men go for support after giving up on IVF?” An answer came back “The pub?”

It started me wondering – where are the spaces where men feel they can be real with each other? It is a missing in our world.

I’ve also wondered – are the negative stereotypes about men stifling the voice that wants to express the full range of emotion? And I can’t emphasize enough – I’m not talking about compromising my masculinity. I mean to own it, and create room for ever-expanding versions of what it might mean to be a man in the 21st century.

One of my friends is setting up a barber. His purpose is to create a space for real talk between men. When men visit the barber, yeah they get a haircut but it’s also a space where men talk. The usual conversation is about sport, cars, gadgets, women…the stereotypical stuff. Nothing wrong with that.

But what would it be like to share things such as “Yeah, I’m finding work really tough. There’s pressure to make the sale and I feel overwhelmed. I’m not sure how the next month is going to go.”

And then be listened to.

No judgement. No fixing. No ideas. No offering solutions. A man simply allowing another man, to share himself by giving him space.

It would be the very thin end of a very big wedge. Instead of things getting so bad that men consider committing suicide; instead of having to intervene at a late stage. Imagine a straightforward, authentic conversation in a safe environment.

We can meet up, create groups and gatherings – whatever – to give guys room.

My invitation to you – actively create space for the men in your life to share themselves. That would make a difference. It creates a space for something new.

James is a full-time teacher, other-time entrepreneur. Happily married, he writes about masculinity, relationships, and self-development. His latest venture is relationship coaching - to cause a breakthrough in the conversation for romantic relationships between men and women.

Facebook63TweetPinEmailShares63
wpDiscuz
0
0
Would love your thoughts, please comment.x
()
x
| Reply
Share this ArticleLike this article? Email it to a friend!
Email sent!