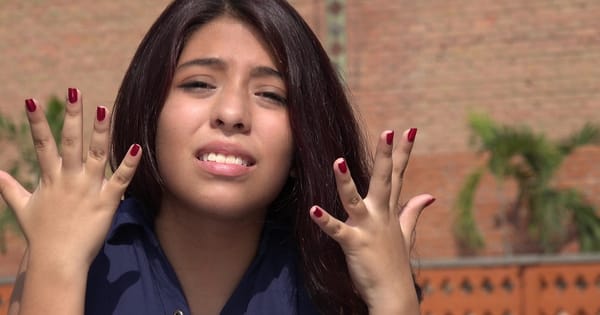 Few things in life are more confusing and scary for a dad than a teenaged daughter. It’s just true.

When our daughters are cooing babies, Dads develop an idealistic fantasy that the father/daughter bond will strengthen into one of those “You can tell me anything” types of arrangements by the time his darling girl reaches high school, kind of like Molly Ringwald and her dad in “Sixteen Candles.”

In reality, though, it’s just the opposite.

As you read this, millions of dads across the globe are trying in vain to tiptoe past their teenaged daughters without somehow offending or enraging them. In most cases, their efforts will end in failure.

It’s a tightrope act. Our daughters are still legally our responsibility and we’re still tasked with teaching them how to be good, moral, high-functioning adults, but they don’t see it that way. They see dads as Obstacles to Fun, pure and simple.

And girls, as you know, just wanna have fun.

I’m here to help all you terrified fathers. At least I’m going to try. If you follow these six simple directives, you will probably have around a 50%  chance — maybe 53 — of not infuriating your daughter. Sure, those are bad odds, but they’re better than nothing.

6. Do not criticize her, speak to her, or even look in her general direction.

This is the most foolproof method. Honestly, you don’t have to read any further, but I promised six, so…

5. Avoid at all costs any type of counsel whatsoever, particularly advice regarding food, boys, or social media.

This is tough because up until now, counsel has been kind of your main gig. Bite your tongue, count to 10, and exit the room immediately.

4. If you’re forced to speak, only one phrase is acceptable: “Wow, that’s awful.”

At least 99.999% of the time, this phrase will be appropriate for whatever she’s talking about. (Think about it.)

3. Always surrender your charging cable to her when driving somewhere.

She’s only got 8%, after all, and the loss of her mobile phone, even momentarily, could alter the time/space continuum in ways yet unknown and possibly devastating to all of mankind.

2. Never comment on excessive selfie activity, even when the flash is blinding you as you try to drive at night.

Nothing must disturb or interrupt the selfies, least of all, Dad.

1. Try your best not to find yourself in a room alone with her at all, unless you’re handing her money, and then it’s OK for a few seconds.

But don’t push it. Hand over the cash without making eye contact unless you’re wearing solar eclipse glasses, and then only for a second. Don’t fly too close to the sun.