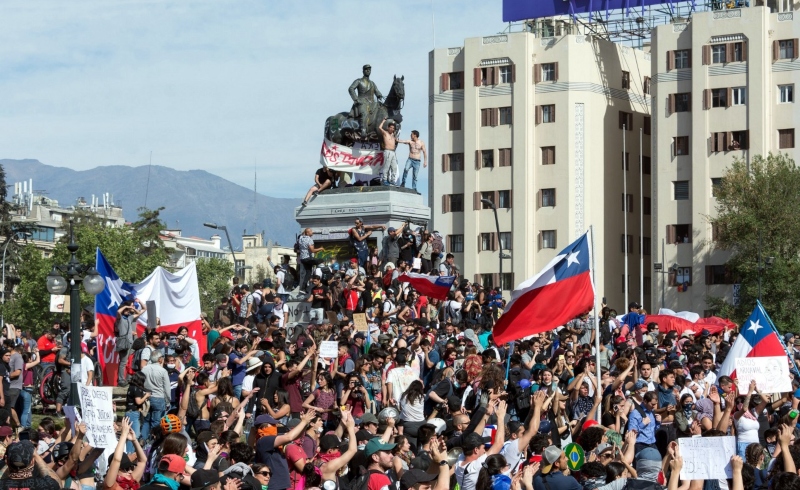 —
Anybody interested in understanding the causes of the ongoing unrest in Chile would do well to read this lengthy article by Richard Davies, formerly of The Economist, which explains in detail the failure of the neoliberal policies that count on the market as some sort of magical infallible force that equilibrates everything.

“How inequality tore Chile’s free market success story apart” is an excerpt from his recently published book “Extreme economies”, and discusses how Chile’s economic experiment, which began with an agreement between Chicago University and Santiago de Chile’s Universidad Católica, allowed a group of economists, the so-called Chicago Boys, to effectively dictate the country’s economic policies. A summary of the chapter can be found in The Guardian: “Why is inequality booming in Chile? Blame the Chicago Boys”. Led by Milton Friedman, the Chicago University team generated what was described as an economic miracle that made Chile Latin America’s developed country, while at the same time heading the Gini coefficient, which assesses inequality. Among OECD nations, Chile leads inequality, followed by Mexico, Turkey or the United States, with my native Spain in eleventh place.

The simplistic belief that the market should be left alone to solve everything and that businesses’ only responsibility is to shareholders was categorically rejected at the end of last year by the Business Roundtable — the most important business lobby in the United States, headed by 181 CEOs of large companies representing around 30% of total market capitalization. It was an important boost to so-called stakeholder capitalism, the idea that suppliers, workers, customers, society and the environment are as important as investors.

If you think that the protests in Chile are an isolated case, that they were the result of an isolated episode generated by the rise in the price of the metro ticket, or that they were due to some kind of conspiracy, you’re wrong. I have just had the opportunity to give a class to a group of Chilean executives who explained to me that the protests are due to the collapse of an entire system of economic management based on a failed experiment using profoundly simplistic measurements. Chile’s problems will not be resolved through short-term measures, they said, but instead will require rebuilding the entire economic system.

As Davies’ article illustrates, only the Chicago Boys, many of them now in their eighties, refuse to accept what was wrong with their approach, instead preferring to blame the current crisis on some kind of conspiracy. If you share their views, you need to take a long hard look at what’s going on in Chile. Half the world is nervously observing how events are unfolding there, fearful that similar protests will spread to other developed economies where inequality is rising rapidly. Calls to reduce inequality and create fairer societies are no longer coming solely from the left, but from prestigious economists, from The Economist, from the Business Roundtable and from the Democratic Party.

In a society in which technology makes it possible to generate ever greater productivity and wealth, and in which jobs are increasingly being carried out by machines, only the construction of systems that provide appropriate distribution of profits will work in the long term. If technology increases inequality, it simply becomes the lubricant that greases the slippery slope toward protest and disorder.

Time and again history has shown us that when inequality becomes unsustainable, even the most powerful republics fall. Let’s learn from history, which is what it’s there for.

Previously published on Medium.com and is republished here under permission.