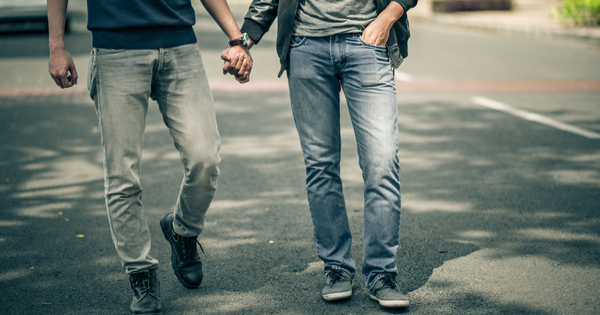 I don’t remember how it came up, but one day one of my friends asked me if I, as a heterosexual man, would be offended if someone thought I was gay. I thought about it a bit, and then I had to be honest:

My friend was in turn offended by my response, and I was immediately on defense mode. I told her that the majority of my male friends, as progressive as they may be, take it as an affront to be misidentified.

Yes, it’s about more than that.

I know about the ideations in masculinity that lead to homophobia. It does not excuse my behavior that I have a lot of gay friends or that I have been there for them when they themselves came out. My answer inherently implied that there’s something wrong with being perceived as gay, that that identification is something I don’t want to be associated with.

I shared the same thought with some other friends out of remorse. I thought a lot about it and I would be lying if my gut, instinct reaction wasn’t to take offense if someone else thought I was gay. I asked my friends the same question, and they unanimously had the same reaction.

We knew it was homophobic. And yet it was our knee jerk reaction. We were brought up in environments where being seen as “feminine” or being seen as “unmanly” (as homosexuality is associated with in a popular context) was bad.

I felt really bad. And then I started teaching in an inner-city school.

I cannot count how many times kids in my school call each other “faggot” or use gay as an insult to each other on a daily basis. As much as I’ve tried to educate kids on why using the word “gay” as an insult or calling someone a “faggot” is offensive, the result is still the same: the kids do it regardless. At my school, a kid calling another kid “gay” or “faggot” is the worst insult that can be leveraged.

I consulted a friend who’s been teaching in an inner-city environment longer, asking him for help. I didn’t know what to do, but I knew the behavior was both well-entrenched and unacceptable. What he told me was this:

The kids don’t want gay people not to have rights or to be treated badly. They believe everyone should have rights and that when it comes to gay people, that’s no exception.

I can’t lecture them on that if I’m not working on it myself. The truth is, for me, there’s nothing wrong with someone else being gay. But if someone thought I was gay — I know it’s wrong, but I would take it offensively.

That’s how I was raised. I’ve worked for a long time to correct it, but I still have that internalized aversion. Even when gay men have hit on me, I have a gut reaction of distaste.

I know that I’m not more homophobic than most other men out there. I am a proud LGBTQIA ally.  But aren’t I a hypocrite for being defensive when someone else thinks I’m gay?

Toxic masculinity is defined by Dictionary.com as “a cultural concept of manliness that glorifies stoicism, strength, virility, and dominance, and that is socially maladaptive or harmful to mental health.” And I see this far too common among other men and the friends, adults, and students that I surround myself with.

The problem might be that I’m a bad person and a bad apple. But a bigger problem is that the need to be seen as masculine is so internalized and ingrained in our culture that serious reform from people in positions of power needs to happen to make progress shifting the culture of homophobia in perceptions of masculinity.

Personally, I saw it as the bravest and toughest thing my friend ever did when he came out to me in college. We were on a run together when he stopped me and told me he had something to say.

As great as that moment sounded, all I did was nod in silence for a straight 20 seconds.

But I didn’t have anything to say. My mouth was open but no words were coming out. I was in shock that my friend was brave enough to be himself when dregs of society will ostracize him for being different. We continued on the run and talked about it, and talked about who knew, who didn’t, who he trusted, and how he felt finally telling someone.

We talked about his plan for telling his parents, and he said he was going to tell them over winter break.

And it’s because of that experience that I myself moved closer to complete tolerance and open-mindedness. No, I’m not perfect, as I’ve stated in this article. But that experience was affirming of my thought that perceptions and culture around masculinity needs to change.

Maybe that’s where I can convert my students to seeing using the words “gay” and “faggot” as insults to each other are unacceptable and inaccurate. I try to stress to them the daily injustices of navigating the world as a gay person, from the stigma to the discrimination and prejudice you have to deal with. I cannot imagine how hard it is to be a gay person and have people nonchalantly call you a “faggot”.

But I won’t give up and I’ll press on, working on myself while working on my students. But the issue is systemic and cultural, and it will take a village of all men to stop, think, and redefine what it means to be a man.

Facebook48Tweet2PinEmailShares50
wpDiscuz
0
0
Would love your thoughts, please comment.x
()
x
| Reply
Share this ArticleLike this article? Email it to a friend!
Email sent!