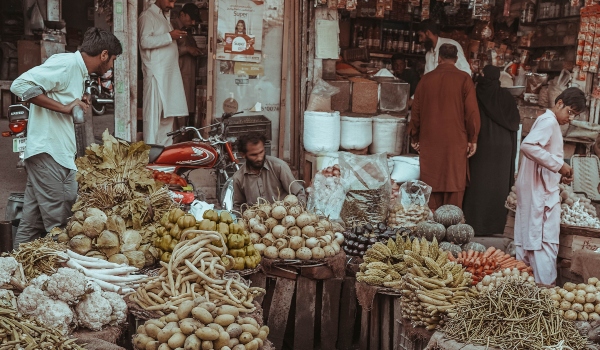 —
LONDON, 1 August, 2019 − Climate change driven by ever-higher levels of carbon dioxide in the atmosphere will do more than just limit harvests. It will increase under-nutrition, making the planet’s staple foods less nourishing.

Put simply, the higher the use of fossil fuels, the greater the growth in the numbers of anaemic mothers, malnourished babies and stunted children, and the higher the count of overall deaths from malnutrition.

And things will get worse. Over the next three decades, according to a new study in the journal Lancet Planetary Health, the combination of shocks from a hotter, stormier, more extreme world and ever-higher levels of atmospheric carbon dioxide will combine to make plant proteins, zinc and iron less available.

“Diet and human health are incredibly complex and difficult to predict, and by reducing the availability of critical nutrients, climate change will further complicate efforts to eliminate undernutrition worldwide”

Researchers warn that even though agricultural techniques have improved, even though markets are better at distributing food surpluses, and even though the extra carbon dioxide will act to add fertility to crops if atmospheric carbon levels continue to rise, dietary protein, iron and zinc will all fall by significant percentages in the harvests of 2050.

This will hold true for many of the world’s most important staples, among them wheat, rice, maize, barley, potatoes, soybeans and vegetables.

And many nations that already experience higher levels of malnutrition – in South Asia, the Middle East, sub-Saharan Africa, North Africa and the former Soviet Union − will continue to be disproportionately affected.

“We’ve made a lot of progress reducing under-nutrition around the world recently but global population growth over the next 30 years will require increasing production of foods that provide sufficient nutrients,” said Timothy Sulser of the International Food Policy Research Institute, one of the researchers.

“These findings suggest that climate change could slow progress on improvements in global nutrition by simply making key nutrients less available than they would be without it.”

The Lancet is one of the world’s oldest and most distinguished medical journals: it has at least twice comprehensively addressed aspects of climate change. At the start of this year it found that with a plant-based diet, it would be in theory possible to feed, and properly nourish, the 10 billion population expected later this century.

Late last year it also warned that, just in this century alone, extremes of temperature had threatened the health and economic growth of an additional 157 million people.

The latest study is a confirmation of earlier findings: other scientists have already warned that protein levels and micronutrient properties will be diminished in a greenhouse world.

Separate research has found that both the rice and wheat harvests of tomorrow could have less food value.

A third study has found that global fruit and vegetable production is already not enough to sustain a healthy population. And researchers have repeatedly warned that ever more-intense and frequent natural shocks that accompany global heating – floods, heat waves, drought, windstorm and so on – threaten food harvests worldwide and could even precipitate the kind of global famines last seen in the 19th century.

The researchers limited their horizon to 2050: they warn that, on present trends, problems with food nutrition levels are only likely to get worse in the decades beyond.

They also point out that the availability of nutrients is only part of the problem: the poorest also need access to clean water, sanitation and education to take advantage of any improved diet.