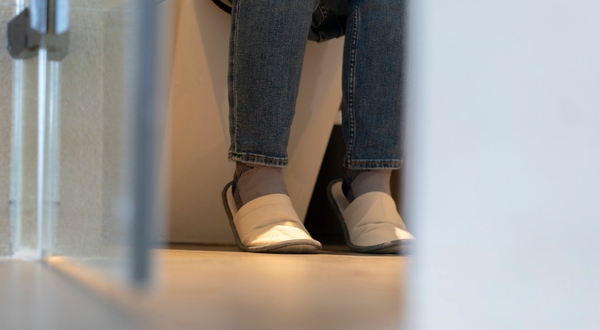 —
In the War between the Sexes, the ongoing battle over the position of the toilet seat almost seems insurmountable. The shrieks, the eye-rolls, the SPLASH, and the anger contribute to the frustration couples feel while learning to live together.

My first experience with the misplaced toilet seat occurred early in my marriage. It was the middle of the night when I awakened from a deep sleep to answer the call of nature. I stumbled to the bathroom, expecting to find the seat in the same position I had left it in the night before. Imagine my surprise when I sank lower than expected and hit the cold porcelain instead of the plastic I counted on. As I caught myself on the side of the sink, I let out a yelp. My darling husband had sabotaged me!

I was the third of three children, all girls. I never had to deal with a raised toilet seat. My husband, the second of two boys, didn’t see the problem and the battle was on. Up, down, up, down, round and round we went. I didn’t understand why he just couldn’t put the seat down. He didn’t understand why I just couldn’t look. Neither of us was willing to abandon our deeply held beliefs on this very important issue.

One day, a solution appeared as if by magic. It occurred to me that if we lowered both the seat and the lid, we would both have to do the same thing if we wanted to use the facilities. He would still have to raise the seat and I would have to raise the lid. Now if I forget, I just sit down hard instead of landing in water. We have taught this technique to our children, a son and daughter. I hope this will prevent them from carrying this battle into the next generation.

There has long been peace in our house, at least in the bathroom. However, the first thing my husband does when he travels without me is to head to the bathroom of his hotel room and fling up the toilet seat. Ah, the sweet taste of rebellion!

What battle do you need to conquer in your relationship?
—