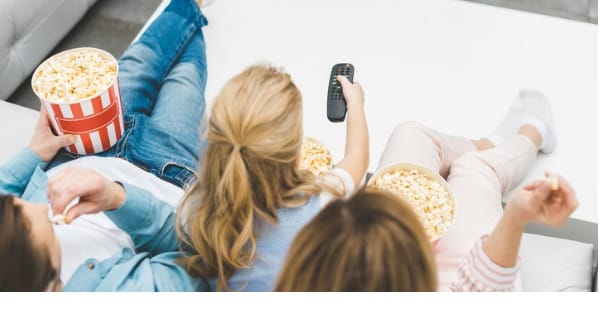 We have to get chips and queso!  After that, we also need something fried and very unhealthy.  I need to feel it in my chest when I eat it.  So mozzarella sticks and some jalapeño poppers.  Wash it all down with tons and tons of soda.  Regret is for tomorrow, spending time with my daughter is for today.

“Do we really need ice cream sandwiches AND mini sausages in BBQ sauce?” my daughter asked me when we were at the store.  “That seems like a bit of overkill.”

“This is how you tailgate.  This is how it’s done,” I said.  I’m excited and pumped.

The Golden Globes are the first show of awards season.  I’m going to sit there with my wife and daughter and start looking at some dresses.  To much floof?  Maybe?  Is that dress made by that designer, I didn’t think they were “in” anymore? Maybe my daughter and I can run a fantasy awards team and crush the competition?

We threw all the tailgating supplies in the back of the minivan and went home.  I’ve got the TV set up.  I’m let everyone eat in front of it tonight, and I will deal with the carpet stains tomorrow.  I’m all about awards season.

I’m not demographic for award season.  I’m a middle-aged father that listens to talk radio.  My podcasts consist of different takes on history and how to repair broken water heaters.  I wear socks with sandals but only because they make my cargo shorts look good.  I have no idea what is hip, what is in, or what is hot.  I have a pair of shoes that are fifteen years old.  You wouldn’t recognize the brand.

I see movies with actors that I don’t recognize anymore.  Songs on the radio confuse me. Who is Post Malone?  What is a JoJo Siwa?  I think it’s the name of a quality air filter.

I cannot tell who the designer is by the style of the dress.  And honestly, I have no idea of what dresses I like and don’t like.  When I see them trotting on the red carpet, the dad in me takes over. “Well, that’s a fantastic effort.  You keep doing you and shoot for the stars!  I would have never used old tire treads as a fashion accessory, but what do I know.  Live your best life, designer!”

So, ok, I’m not a fan of current pop culture.  But I am a fan of spending time with my daughter.  If this matters to her, then it matters to me.  If she is into it, then I am, too.  And if we are going to do this, then let’s do it right.  Dad knows how to tailgate.

It’s easy to grow apart from our kids as they get older.  It’s tough, sometimes.  It’s ok to admit that fathers do miss those days when they would sit in our lap and ask us to read just one more story.   We always did that because that’s what home feels like.  A little one that looks up to you with big eyes.  You were their hero.  They would tell you about their day in more than a grunt.  My daughter and I could have had a forty-five-minute conversation about the color purple at that time.

Things change, though.  She’s a teenager now and she’s more shut than she’s ever been before.  Her interests aren’t my own.  She’s gone a direction that is not surprising, but it’s still isolating for our relationship.

Or it would be if I just let it happen.  That’s not what dads do.  As I said, we are heroes and heroes change with the times.  If she gets excited about awards season and gets into it, then by God I’m 100% in.  Let’s go!

My daughter leaned up against her mom as the show started.  I considered getting a flag pole and putting it up next to the TV.  Do they make a flag for award shows?  I bet they do.  I’m going to get an Oscar one, I think.

I don’t know how to celebrate this type of event but I do know how to tailgate.  I had my grill all ready to go.  And if my daughter is willing to share this experience with me, then dammit I’m going to learn about some dresses and Zendaya.  She’s an actress, and I’m not sure if she has a last name.  My daughter just calls her Zendaya.  I think I’ve seen her in a movie with JoJo Siwa.

Dads do what we have to do.  It’s our defining characteristic.  Sometimes, that means fixing the water heater and getting a good set of quality tires.  But other times, the times where we don’t tell you our motivations, it’s way more emotional than that.  Yes, dad feels things.  Dad rarely talks about why he feels those things.

It’s counter-intuitive, I get that.  But I’m acting on it.  So I’ll watch whatever my daughter is into because I miss my daughter.  Just know that when I tailgate, it means that I love you.

Not that first dress, though.  Ugh.  But hey, that’s a good effort and I’m proud of that designer.  That actress looks like she needs to eat.  I’ll have my daughter invite her over for some barbecue.

END_OF_DOCUMENT_TOKEN_TO_BE_REPLACED

Facebook1Tweet6PinEmailShares7
wpDiscuz
Share this ArticleLike this article? Email it to a friend!
Email sent!