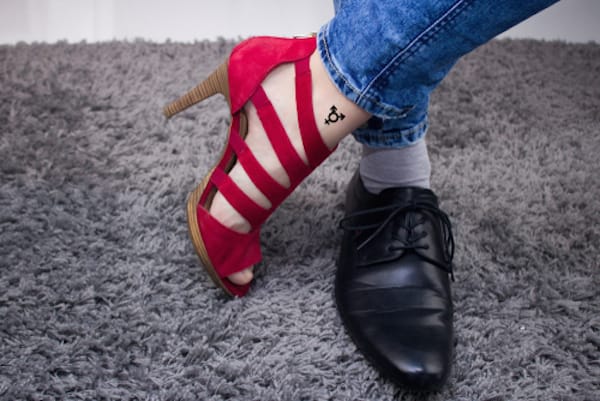 Take, for example, many religious conservatives like Franklin Graham, the CEO of the Billy Graham Evangelistic Association and son of Billy Graham who has gone bonkers over the announced presidential candidacy of Mayor Pete Buttigieg, whom Graham has attempted to define. Responding to Buttigieg’s discussion regarding his faith, Graham wrote on Facebook:

Mayor Buttigieg says he is a gay Christian,” Graham responded. “But as a Christian I believe what the Bible says. God’s Word defines homosexuality as sin, something to be repentant of, not something to be flaunted, praised, or politicized.

In reality, being a Christian isn’t just a title we select or a church membership. It is a faith in God and His Word that transforms our lives to be more like the One we follow—Jesus Christ. Jesus said, ‘If you love me, you will keep my commandments’ (John 14:15).

And he quoted the infamous scripture Leviticus 20:13:

If a man lies with a male as with a woman, both of them have committed an abomination; they shall surely be put to death; their blood is upon them.

Jesus didn’t come to promote sin, He came to save us from sin,” Graham wrote. “The Bible is very clear. God destroyed the cities of Sodom and Gomorrah because of homosexuality. God defines sin in His Word—it’s not up to our opinion, the latest poll, or a popular vote.

Today, we term the ancients’ and indigenous peoples’ explanations of the mysteries of the universe as “mythology” or “superstition,” but Abrahamic monotheism as “truth” and as “divinely inspired.”

All religious doctrine actually stems from mythology and conjecture, from Adam and Eve in the Garden of Eden, to the Burning Bush, to the Covenant and the parting of the Red Sea, to the Immaculate Conception and Resurrection, to Muhammad’s rising to heaven from the Rock, to the Golden Tablets, all beginning with the human invention of God(s).

Many of the more conservative religious denominations demonize free thinkers and critical thinkers because they cannot and will not allow themselves to be herded into the stables of social conformity and convention as readily.

Some individuals and social institutions have gone as far as to “explain” the reasons or “causes” of our same-sex attractions and the continuum of our gender diverse identities and expressions.

An article titled “Symptoms of Ghost Affecting or Possessing a Person” from the Spiritual Science Research Foundation claims that 85% of gay and lesbian people are possessed by ghostly entities.

The main reason behind the gay orientation of some men is that they are possessed by female ghosts. It is the female ghost in them that is attracted to other men.” Conversely, lesbianism is the result of women who suffer “the presence of male ghosts in them. The ghost’s consciousness overpowers the person’s normal behavior to produce the homosexual attraction. Spiritual research has shown that the cause for homosexual preferences lie predominantly in the spiritual realm.

Not to be outdone by non-Earthly entities, Dr. Mariam Al-Sohel from Kuwait, in an interview she gave to Scope TV, says her suppository antidote to homosexuality is based on Islamic “prophetic medicine,” which can provide a cure.

She created new therapeutic suppositories that limit the sexual desires of boys, whom she defines as “the third gender,” and girls, butch lesbians of “the fourth gender.”

She claims that her suppositories work by “exterminating the worm that feeds on the semen.” When asked how it functions in lesbians, she said, “The ingredients [for the cure] are the same for both sexes, but I made them into different colors.”

The U.S. anti-vaccine group, VacTruth, claims that childhood vaccinations are possible causal factors in a person becoming homosexual and/or transgender. An Italian scientist and journalist Gian Paolo Vanoli said that as a child grows up and tries to “find its own personality,” if he or she has mercury or other substances in their system that linger from vaccinations, “the child becomes gay.”

Former U.S. Senate Republican Majority Leader in 1998 proclaimed that homosexuality is a disease:

It is [a disease]….You should try to show them a way to deal with that problem, just like alcohol…or sex addiction…or kleptomaniacs.

Psychoanalyst Dr. Edmund Bergler, in his 1956 book, Homosexuality: Disease or Way of Life? stated in no uncertain terms:

…homosexuality is a neurotic condition…. Specific neurotic defenses and personality traits that are partly or entirely psychopathic are specifically and exclusively characteristic of homosexuals, and…these defenses and traits put the homosexual into a special psychiatric category.

Dr. Irving Bieber, in his 1962 co-authored study, Homosexuality: A Psychoanalytic Study of Male Homosexuals concluded that homosexuality is a psychological malady that can be cured or prevented with psychoanalysis. He later claimed in 1973 that: “A homosexual is a person whose heterosexual function is crippled, like the legs of a polio victim.”

Lesbianism is a symptom, and not a disease entity. It is the result of a deep-seated neurosis which involves narcissistic gratifications and sexual immaturity. It also represents a neurotic defense mechanism for feelings of insecurity.

Psychiatrist, Dr. Charles Socarides, founder of National Association for Research & Therapy of Homosexuality (NARTH) in 1992 argued that homosexuality an illness, a neurosis, possibly caused by an over-attachment to the mother. This “illness” could be treated. His gay son, Richard, served as an advisor in the White House to Bill Clinton, 1993-1999.

Uzbek imam Rahmatulloh Saifutdinov, chief imam at the Mirzo Yusuf Mosque in Tashkent, asserted that babies are born homosexual when their mothers have sex with their husbands but fantasize about other men.

Milo Yiannopoulos, social conservative and former editor of Breitbart News, has labeled trans people as suffering from a “psychiatric disorder,” as “confused,” and as predators:

I makes no apologies for protecting women and children from men who are confused about their sexual identity.

In 1973, American Psychiatric Association, declared that same-sex attractions impose no disorder if the person is comfortable with their sexual orientation:

[H]omosexuality per se implies no impairment in judgment, stability, reliability, or general social or vocational capabilities.

American Psychological Association followed suit in 1975 and urged mental health professionals “to take the lead in removing the stigma of mental illness that has long been associated with homosexual orientations.”

The Rong, who are the original inhabitants of Sikkim, the former independent nation in the Himalayas between Nepal and Bhutan, believe that homosexuality in men is the result of eating the flesh of a non-castrated pig, but they give no reason.

From the Eugenics movement of the 19th century, some members of the scientific community viewed people attracted to their own sex and others who expressed gender diversity as constituting distinct biological or racial types — those who could be distinguished from “normal” people through anatomical markers.

For example, Dr. G. Frank Lydston, U.S. urologist, surgeon, and Professor from Chicago, in 1889 delivered a lecture at the College of Physicians and Surgeons in Chicago in which he referred to homosexuals as “sexual perverts” who are “physically abnormal.”

The U.S. medical doctor, Allan McLane Hamilton wrote in an 1896 publication titled the American Journal of Insanity that”

The [female homosexual] is usually of a masculine type, or if she presented none of the ‘characteristics’ of the male, was a subject of pelvic disorder, with scanty menstruation, and was more or less hysterical and insane.

Physician, Perry M. Lichtenstein, who co-published A Handbook of Psychiatry in 1943, wrote in 1921 that:

A physical examination of [female homosexuals] will in practically every instance disclose an abnormally prominent clitoris.” And he expressively added, “This is particularly so in colored women.

In 1857 in France, Ambroise Tardieu wrote that:

This degeneracy is evidenced in men who engage in same-sex eroticism by their underdeveloped, tapered penis resembling that of a dog, and a naturally smooth anus lacking in radial folds.

The Swiss psychiatrist, August Forel, wrote in 1906 that “the [sexual] excesses of female inverts [homosexuals] exceed those of the male” and that “this is their one thought night and day almost without interruption.” He also claimed that male homosexuals “feel the need for passive submission” and “occupy themselves with feminine pursuits,” while “nearly all [female and male] inverts are in a more or less marked degree psychopaths and neurotics.”

Dr. Havelock Ellis, was one of the relatively more “progressive” physicians by current standards, one who did not consider same-sex attractions as a disease. In a 1902 article titled “Dr. Havelock Ellis on Sexual Inversion” [inverting the “normal” gender expectation] concluded, however, that:

Women’s colleges are the great breeding ground of lesbianism….They learn the pleasure of direct contact … and after this, the normal sex act fails to satisfy them.

Joseph Stalin, for example, recriminalized homosexuality in the Soviet Union in 1933 and claimed it was the result of “fascist decadence.”

Others view homosexuality as criminal offenses. Richard von Krafft-Ebing, for example, 19th-century Austrian sex researcher wrote that it was the product of vice. Approximately 80 nations around the world still criminalize homosexual relations.

In Iran, the government has conducted an estimated 4000+ executions of accused homosexuals since the Islamic revolution of 1979.

Laura Ingraham on Fox News interviewed Dr. Paul Nathanson when they both considered that transgender people are secretly trying to destroy humanity and create a new “species” of cyborgs.

I’m sorry, hear it one more time perfectly clearly: If you’re gay or a lesbian, it’s a biological error that inhibits you from relating normally to the opposite sex,

A huge portion of the male homosexual populace is predatory on young boys.

The so-called Child and Family Institute propagandizes in its bogus study that:

As we changed in the Gay Liberation Front in the late 1960s and early 1970s: “Better Blatant Than Latent!”

Rather than debating the so-called “causes” of sexuality and gender identity and expression, we need to center discussions in the area of social justice, which I define as the concept that local, national, and global communities function where everyone has equal access to and equitable distribution of the rights, benefits, privileges, and resources, and where everyone can live freely unencumbered by social constructions of hierarchical positions of domination and subordination based on social identities.

In the final analysis, however, these are issues of human rights and human dignity, not questions of medical and psychological sciences or of religion. If, however, we are stuck on looking at “causes,” let’s concentrate on investigating the causes of prejudice and discrimination. Then maybe we can find a cure.
—

Facebook96Tweet1PinEmailShares97
wpDiscuz
Share this ArticleLike this article? Email it to a friend!
Email sent!