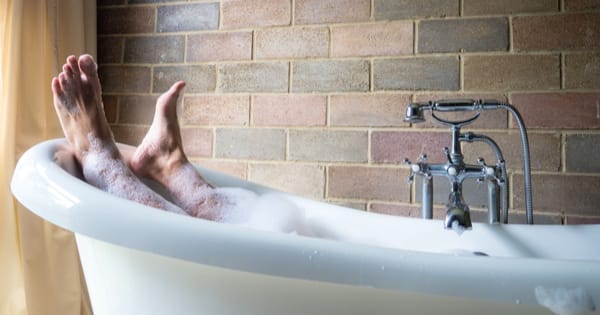 It occurred to me not too long ago, as I lay in my evening bath, that I needed to learn more about the Theory of Relativity.  Or should I say learn about the Theory of Relativity?  What I knew about the matter, dark or light, was it that it had something to do with Albert Einstein’s famous equation (E=mc2), and that whatever it did have to do with it, and considering my poor performance in high school physics, I probably wouldn’t understand it.

But hope springs eternal when soaking in warm water.  And after adding Epsom salts to the brew, I grabbed my kindle and downloaded Einstein’s 1915 breakthrough book on the subject – “Relativity.”

Now before I go further, I should provide context about my motivation to read such heady fare. Basically, my curiosity was piqued and prodded by the recent triumph of astrophysicists from EHT (Event Horizon Telescope), who were able to capture the first-ever image of a black hole.  Big stuff, indeed, and described on the EHT website in Star Trek worthy dialogue: “…The image reveals the black hole at the center of Messier 87, a massive galaxy in the nearby Virgo galaxy cluster. This black hole resides 55 million light-years from Earth and has a mass 6.5 billion times that of the Sun….Black holes are extraordinary cosmic objects with enormous masses but extremely compact sizes. The presence of these objects affects their environment in extreme ways, warping space-time and super-heating any surrounding material….If immersed in a bright region, like a disc of glowing gas, we expect a black hole to create a dark region similar to a shadow — something predicted by Einstein’s general relativity that we’ve never seen before…”

You can understand then why I might be intrigued to learn more, or at least enough that I might appear learned if the topic ever came up at a party, given, of course, I was ever invited to a party. But old habits die hard, and after struggling through the first few pages of Einstein’s text, I considered it prudent to take a break and peruse something less taxing, i.e., “reaction music videos” on YouTube.  I cued in my favorite song of the moment, Goodbye Horses by Q Lazzarus (made famous by the gender-swaying, serial-killing Buffalo Bill in “Silence of the Lambs”), and watched as two young men, as promised, reacted, their faces congealed in disbelief and delight, seemingly astounded that a song from the 80’s could move them to disbelief and delight.  It made me even more interested in the tune, and a quick search on the web produced this explanation of its meaning from Q Lazzarus herself: …”the song is about transcendence over those who see the world as only earthly and finite. The horses represent the five senses from Hindu philosophy (the Bhagavad Gita) and the ability to lift one’s perception above these physical limitations and to see beyond this limited earthly perspective.”

After that, it was hard to dive back into Einstein.  So I turned off the Kindle and tried to recharge and reboot. But my mind remained activated, and I slid into a stream of consciousness inspired by techno rock and technological advance, pondering questions existential (if the speed of light within a vacuum is the same no matter the speed at which an observer travels, why go anywhere at all?) and essential (if children should learn the traditional basic subjects thoroughly, they also might be given the opportunity to skip school thoroughly).  I also latched on to the sensual, recalling the sweet and fragrant smell of a grapefruit grove I hiked through in the Negav, and the farcical, postulating that when it comes to wearing oversized sunglasses, notwithstanding Anna Wintour, no one rocks shades like a three-year-old.

Finally, my mind slowed, and with the water cooled to the point I was shivering, gave up on the bath and headed to bed.  But before turning off the lights, I downed one more page of “Relativity”, and listened again to Goodbye Horses.  And warm again under a blanket, and more warmed by the assurance that genius did exist, in science, in music, even in reaction videos, that the heights of humanity were so easily accessed in today’s world, and that the only excuse for boredom in life was choice, I closed my eyes, and passed, as the line goes, into the night.