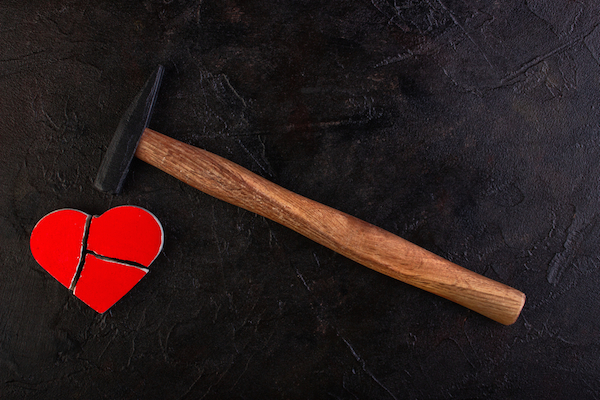 When you married each other, you never expect the marriage to feel broken, but for many couples, it happens. Just like a machine breaking down over time, it’s usually slow and unnoticeable until it’s falling apart on you. And just like a machine, a little bit of maintenance could have prevented it from breaking.

Let’s look at what a broken, unhappy marriage is and how you can fix it.

There’s Constant Arguing With No Conflict Resolution in Sight

A disagreement during a marriage isn’t a sign that it’s broken. There are many reasons why a couple may disagree and may even argue. It’s normal, and it’s actually part of a healthy marriage.

The problem is when a marriage is going through constant bickering, and it isn’t meant to solve a conflict. Instead of solutions, it’s accusations. Bringing up the past when it’s not relevant. Saying “you always” instead of using less accusatory language. These are just a couple of examples.

When your marriage feels like it’s nothing but bickering, perhaps it’s time to take a step back and see if there’s any way you can fix it.

You don’t need to be angry at each other all the time for a marriage to be broken. Sometimes, a broken marriage can come in the form of a lack of any physical intimacy. You no longer touch each other the way you used to. The sex life is nonexistent. All your intimate wants are no longer being met.

Intimacy is an important part of any relationship, and if those needs aren’t being met, there’s a problem in the marriage, and one you should look to fix.

One sign of a healthy marriage is if you’re able to talk to your spouse about most issues. Sure, there may be an issue that your friends or family might be a little better with, but for the most part, you feel comfortable talking to your spouse about any of your issues.

Meanwhile, in a broken marriage, you may not go to your spouse for anything at all. Sometimes, you may even feel like you’re afraid to do so. When this happens, it’s a sign that your marriage is out the window.

You Think About, or Have Had, an Affair

An affair is a classic sign of a broken marriage. When your marriage feels worthless, you may believe that another person can pump some new life into it. You may think about having an affair, have had an affair, or you’re in the middle of an emotional affair. This is someone who you haven’t had physical sex with, but you may feel a deep, emotional connection that you aren’t getting from your significant other.

You’re Imagining Your Spouse With Someone Else

A classic sign of a broken marriage is that you can see your spouse being happy with someone else. A few years ago, you may have imagined that this would never be the case. No one was better for your spouse beside you. However, this opinion may have changed over time, and now you’re imagining your spouse with someone else, be it an old flame or even someone who they’re having an affair with.

You’re Only in it for the Kids or Another Reason

If you have children, you may realize that the only reason why you haven’t signed those papers yet is because of them. You may want to be together to keep the peace. Alternatively, you may only be together for financial reasons, or something similar.

The ultimate sign of a broken marriage is if there’s any verbal, emotional, or physical abuse in a relationship. While some issues are fixable, this is one of those cases where you need to have a zero-tolerance policy for it. Never, ever continue a relationship where you are the victim of abuse, and instead, find a way out if you can.

You’re in a broken marriage. You may believe the best course of action is to get a divorce, but this doesn’t apply to every situation. Broken marriages are fixable, and just like pottery that’s been repaired with gold, it can come out better than ever.

Here’s what you can do.

Have an Honest Discussion

As they say, the first thing you need to do is admit you have a problem. You and your spouse need to sit down and admit that this marriage needs some work. Sometimes, a discussion can repair the marriage, especially if underlying factors are discovered. For example, your spouse may be distant not because they dislike you, but because of stress due to a job.

See if you can work out your problems on your own. With that said, this is usually not doable with a truly broken marriage. You may end up just arguing some more, and causing unneeded drama. In a case like that, your next step is to.

A couple’s counselor should be your next course of action. A couple’s counselor has experience treating couples with marriages just as broken, sometimes even more so, than your own. They can help you realize that your marriage is broken, and tell you what to do to repair it.

While you should work hard to repair a broken marriage, there are some marriages that are beyond repair. If you feel like your marriage is like that, it may be better off for you to end it and move on. It’s better to be alone than in a marriage you’re unhappy with. Hopefully, you can fix your marriage.