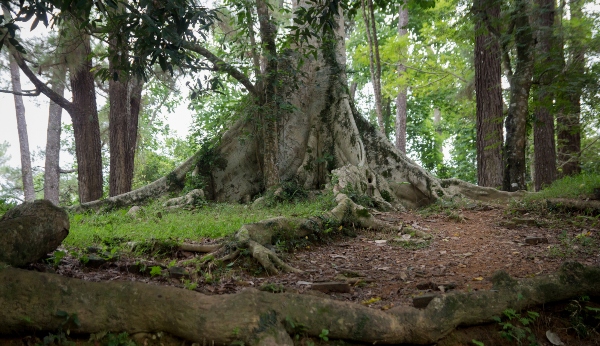 The far-flung islands of the Pacific Ocean were the last scraps of land on the planet to be settled by humans. Three thousand years ago, the voyaging ancestors of today’s Pacific Islanders sailed into a blue horizon, using their advanced navigation techniques to look for land but not knowing what they would find when they got there.

In their canoes, they took a toolkit for survival, which archaeologists call a ‘transported landscape’: chickens and pigs, bananas and root crops they could plant when they made landfall.

But new archaeological research – and the teeth of some of those long-dead voyagers – has revealed that the first colonizers of the Pacific, the Lapita, didn’t just rely on those familiar food sources. Instead, they quickly adapted to their new environments and extensively used the leaves and bark of local tropical forest trees and shrubs.

Monica Tromp, a researcher in the Archaeology Programme of New Zealand’s University of Otago, calls herself a “dental hygienist for the dead.” She specializes in analyzing ’dental calculus’ – the calcified plaque that forms on our teeth, trapping tiny particles of things we put in our mouths (including not just food but also medicine or craft materials, such as plant fibers that need to be stripped for weaving).

For her doctoral research, Tromp analyzed the plaque from 32 ancient teeth that had been unearthed from a 3,000-year-old Lapita cemetery in Teouma Bay on Vanuatu’s Efate Island. While the remains of more than 70 people were found there, dating back to the first generation of humans to arrive in Vanuatu, not many teeth were recovered. This is because of the Vanuatu Lapita’s unusual funerary culture, in which the dead were dug up sometime after burial and the skulls removed, perhaps in a kind of ancestor-worship, Tromp says.

Still, the few dozen teeth scattered among the remains were enough for Tromp to study, by scraping off the plaque and dissolving it in acid. Left behind were microscopic glass-like particles called ‘phytoliths,’ which are formed inside plants as they grow.

Phytoliths take on different shapes depending on the plant. Some are very specific – banana phytoliths look like tiny volcanoes – while those of forest trees are too similar to be able to distinguish between species. From the phytoliths she found inside the teeth plaque, Tromp could see the colonists were heavily reliant on forest resources, though she couldn’t say which plants exactly.

“I have looked at teeth from all over the world, including lots of places in the Pacific, and I’ve never seen any that look like this, that have such a high concentration of leaves and bark,” says Tromp.

The findings with the phytoliths overturn the standard narrative about Lapita livelihoods and how they used the island landscape, says archaeologist Patrick Roberts from the Max Planck Institute for the Science of Human History in Germany, who was not involved in the study.

Archaeologists have tended to assume these peoples’ expansion through Oceania relied on imported domesticated plants and animals and perhaps some marine resources, he says, while tropical forests were seen as a barriers to their agricultural practices.

“However, this study shows that these communities also made significant use of the island plants available to them, including those within forests, as they expanded through the Pacific – once again highlighting the role of tropical forests in human history,” he says.

“It shows there’s more flexibility in the choices people make than we thought – we’re not wedded to particular ways of surviving or eating,” says study co-author and University of Otago professor, Lisa Matissoo-Smith.

She says the tooth-analyzing technique provides information that just doesn’t show up in archaeological middens.

“When I work in the [Pacific] islands, I’m always looking at what people eat and thinking about how their actual behavior is reflected in what we’re likely to see in an archaeological site. I travel often in the bush with women, and they’re eating all the time, and eating stuff that isn’t going to turn up in an archaeological assemblage.”

Just as Indigenous knowledge can help put ancient sites in context, archaeology and paleoecology have a lot to contribute to discussions in contemporary tropical forestry, says Roberts, who has written papers and a book on the subject.

“If we want to see how different technologies, actions, forms of social organization impact forests, this is the only discipline that can provide this. It can even provide insights into where animals used to exist, what their diets were, and how their ranges might be re-expanded in a modern context.”

Tromp’s study, and the growing body of archaeological research on prehistoric land-use in tropical forests, are a reminder to conservationists, foresters and ecologists that “humans have used almost all the tropical forests in the past,” he says.

“They can no longer be treated as wildernesses or untouched, and it’s clear that in many instances humans have shaped the species that grow there… We must always think, what do we want to preserve, and what do we want to return the environment to?”

The myth of the pristine forest has sometimes been used to justify removing communities from protected areas. Instead, we should be listening to the people who have lived in these places for millennia, Roberts says. “We should consult them, instead of making policy decisions from an ivory tower miles away.”

That’s not to say the first Pacific peoples were living in total harmony with nature. Several species of bats, birds and a giant crocodile went extinct on Vanuatu shortly after human arrival, Tromp points out. But in some places in Oceania, there’s evidence that people became aware of their ecological impacts and shifted to more sustainable strategies over time, Roberts says.

“They didn’t always, of course, and there are some examples of failure. However, it’s nothing like the unchecked pressures we place on tropical forests today, many of us from thousands of kilometers away.”