Get Daily Email
Join/Login CLOSE
Home / Featured Content / What Nightmares May Come: Divorce in the Time of Corona 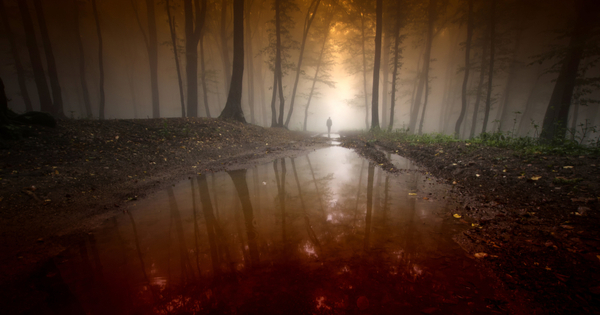 My throat clinched. I tried to breathe in deep, but I stopped before fully filling up my lungs. An invisible weight pressed down on my chest.

At first, I thought these were symptoms of Covid-19. I wondered: Did I have upper respiratory pain? Did I have a wet cough? Did I have a fever? I didn’t feel any of those things.

I felt dreadful loss of control: the end of my marriage, moving into a smaller place alone, and then the furloughing of my job. I was alone without purpose.

During the day, this dread sunk on me. I didn’t know where to go when I felt this dread—the dread was with me and I couldn’t escape myself.

There was no vaccine, but I needed a treatment. I looked up this tightening on my body and this shortening of my breath. I either had anxiety or panic attacks, or both.

I thought I could breathe again. The dread seemed manageable when I was awake. I could just force myself to breath and disregard the losses.

I ran through all my accrued paid time off that my job allocated during furlough and so I applied for unemployment. The previous ironically named “Connect” system for the state of Florida had bounced back most applicants at least once. By the time I applied for unemployment the state had a new mobile site that I used as easy as filing my taxes separately. L. had reached out to file our taxes jointly, but I had pointed out that our Marriage Settlement Agreement stated we would do so alone.

Filing for unemployment felt easy to me since I applied when I thought nobody else wanted to apply: during the middle of the night on a Saturday. After I applied, I was still awake and since I usually read something before I went to sleep I looked for something to read online. I found the short story “Sleep” by Haruki Murakami whose mysterious novels I had been reading during the doom of my marriage and into my divorce.

“Sleep” followed a narrator—a wife of a dentist and a mother of a young elementary-age child—who awoke from a night terror to read Anna Karenina and then kept reading it through the night into the morning until her husband and son had to get to work and school. Then, she continued to read it during the day, finding chocolate flakes between the pages, and so bought and ate some chocolate bars before making a quick lunch for her husband who came home. After he returned to work, she kept reading about the Russian world of Anna until Anna had her affair, confessed it, and eventually threw herself under an oncoming train.

The narrator discovered she didn’t need to sleep and her husband didn’t need to know about it. She just read in the night and days, and after finishing began to explore. She drove around by herself with her thoughts. She would sit and stare in a parking lot by the harbor. She lived in her own suburban Japanese world. She had stayed awake for seventeen days until one night shadows approached her car and began to shake it with her trapped inside like herself trapped inside her body, her life, her mind.

Before I went to sleep, I wondered if L. felt a similar way as the narrator. She had read Anna Karenina, but I couldn’t remember what she thought of the book—its world, its character, its ending. Had L. gone to her own mental life that she wanted to be in alone? Did she disappear? Did she escape? Did she want to share that with me? Did she want to keep it to herself? I never knew.

I started to dream. Usually, I didn’t remember my dreams. I would go to bed and then go to sleep and wake up rested. But I began to dream and remembered these dreams.

Or rather, nightmare. A verb. Nightmares. Nouns. More than one.

I dreamed L. and I were back in the Midwest town where she had moved with me when I went to grad school. She was asking our female friends for a relationship. She was with me, but didn’t want to be with me anymore.

I woke up covering my heart. My hands could hold my heart. My dread red-lined the little wet engine. I slowed it down by breathing and eventually went back to sleep.

I woke up with wet boxers but also a wet T-shirt. My legs, as well as my arms, felt slick under the covers. Rage covered me like the sweat. I couldn’t go back to sleep.

I thought I didn’t know what to call these feelings. I didn’t want to name whatever caused this breathlessness and nightmares. I knew I needed to know or else I wouldn’t breathe and I wouldn’t sleep.

Online, I looked up “short breathing” and “sleepless nights” and “anger” and whatever I could think of. I came across that this was all pain. It was pain in my body—in my lungs and in my heart—and it was pain in my psychology—in my mind and still in my heart. I needed to acknowledge this pain and I could do it with a three-step self-compassion exercise.

I set up the mat that I sleep on. It’s as wide as a sidewalk block. Enough room for only one person.

I knelt as if readying for prayer. Perhaps it was a sort of prayer. I was asking for help.

First, I said, “Loneliness.” I named the pain. This one pain amongst so much pain.

I wondered about what my dream with the Midwest women had meant. Perhaps I imagined L. wanting to return to community where she felt closeness and not a clinching. She had lost that when we left the Midwest to work in the Southwest before we returned Florida.

Then, I imagined my aunts—three who have been divorced—speaking to me, comforting me, saying that they knew about my loneliness. But did they know? They had been divorced because of abuse and affairs and addiction, not just abandonment. I wanted my pain to only be my pain. They spoke to me and they said they knew. The pain was pain. My loneliness wasn’t only my loneliness. I knew.

I wondered about what my dream with the happy guy meant. Perhaps I imagined L. wanting to be fully accepted. But I wasn’t the one who made her feel that. I wasn’t her guy anymore.

Finally, I said, “This will pass.”

My cat bonked his head against my knees. I moved him off the mat. I got under the covers. He came over to me, teasingly close. He needed to lick his toe. Then, he pranced to me and I pulled him to my side.

“My boys,” L. used to say. She would stand at our bedroom’s threshold while I was in bed ready to go to sleep earlier than her. She would stay up often having trouble falling asleep. My cat would be curled at my legs. I would set my book on my chest.

We would both look up at her, maybe receive a kiss, and then watch her go.