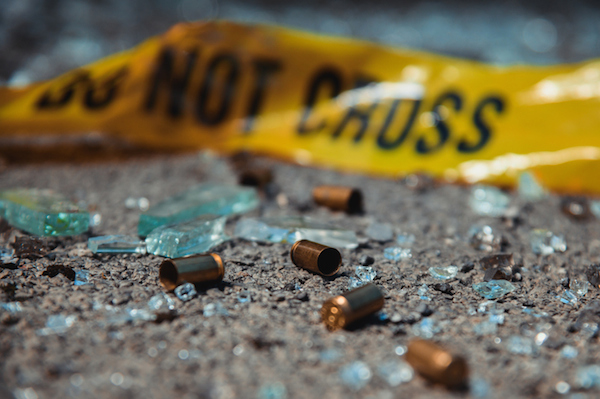 All of the biggest moments in my life so far have been about needing things to improve and then taking immediate steps to improve them. But before I could act on my own behalf, it was my mother who did this for me.

I was born in Taiwan, where my father died from asthma when I was 3 years old. From then on, I was raised by a single mother. When I was 5, I had an asthma attack myself that landed me in the ICU. My mother saw then an opportunity to make our lives better: She moved our small family to South Africa, where the air was of better quality.

South Africa’s air quality was indeed better. In fact, the country appears to be quite charming in general: If you ever visit, you’ll see on first glance an idyllic landscape similar to the beautiful cities of North America or Western Europe.

But if you stay longer and take a look beneath the surface, you’ll notice something else. The environment is a bit tenser than in most other places. When I lived there, people were on high defense at all times, with every home protected by electric fences and private security. Nobody walked alone at night.

This is because around the time I was growing up, violence was peaking there. In Johannesburg, where I spent my formative years, it’s likely that every person you met had either been mugged or knew someone who had. In that city alone, there were about 300 robberies and 65 murders a day. Everyone lived in fear.

The critical point for us was when a close friend of my family’s was shot and killed in a home intrusion in South Africa. Again, my mother realized she wanted something better for us, and she took action. It took a leap of faith and a lot of courage from my mother to bring our family to the United States 20 years ago. She took a job paying $12 an hour on an H1-B visa sponsorship, and we immigrated to the United States. But violence was not yet behind us.

A year after we moved to the United States, Al-Qaida carried out a series of terrorist attacks that will forever be remembered as 9/11. Two years after that, I was approached by a Marine recruiter.

I had lived in an environment of fear and violence for most of my upbringing — and then we got to the place where the grass was supposed to be greener. But the color was not quite so bright under the oppression of violence there, either. As my mother had done so courageously before, I took action. Driven by a sense of duty to protect my adoptive country, I joined the Marines. It was there that I learned the skills that helped me fulfill another dream: to help lower the impact of gun violence on a broader scale.

It was a dream that had been building since I was 5 years old that led me to start Aegis AI, a company that enables security camera systems to automatically recognize firearms and other safety threats. What I learned in the Marines helped make this dream a reality.
Change Starts With a Decision

My mother was the first to show me that if you want things to improve, you have to be decisive in taking action. This was further ingrained when I was a lieutenant in the Marines. In one training exercise I led, I had an elaborate plan to establish a flanking position on the enemy before the main effort attacked up a hill.

Halfway through our movement, however, my plan collapsed: An “enemy” started attacking us with simulated artillery fire. I didn’t see it coming, and I froze up for about 30 seconds. We eventually moved forward and accomplished the objective, but I was later reprimanded by my captain.

I’ll never forget his words: “Lieutenant, in a real-life situation, you can’t freeze up. Your Marines are counting on you, and their lives are on the line.”

What the military taught me above all else was decisiveness. When I believe in something, I want to go and execute it right away. As a startup founder, that has meant our organization has faster decision cycles, we have the advantage of being ahead, and we adjust on the basis of feedback immediately rather than overanalyzing. We commit to action, and we’re more than ready to lead in our relatively new industry.

The Principles That Guide Me in Leadership

My time in the Marines was a period of tremendous personal growth that provided invaluable lessons in my career as a business owner and CEO. I think back to the guiding principles I learned there as I lead my team on our mission to address gun violence.

Troop welfare comes to mind first. A Marine is taught two objectives over all others: mission accomplishment and troop welfare. You have to get your job done, but you also have to take care of your troops. The people working with you toward your mission are invaluable.

Ductus exemplo is a Latin phrase meaning “leadership by example.” My co-founder, Ben Ziomek, and I keep this in mind when we’re thinking about the welfare of the other people involved in this mission. We lead by example by putting the company and the needs of others first.

In our first year as a company, Ben and I didn’t even take salaries. This was out of necessity at first — we simply didn’t have the funds to pay ourselves on top of the staff — but even now that we’re VC-funded, Ben and I are still the lowest-paid employees.

We put the company first, the employees next, and ourselves last. We have the most to gain and the most to lose, so we have to show our team members that we’re willing to lead them from the front lines. We’ll share the best of it and bear the brunt of the worst of it.

And of course, the importance of integrity has stuck with me from my days as a Marine and throughout the founding of Aegis AI. Marines are taught to never lie, cheat, or steal and to do the right thing even when nobody’s looking. I do my best to live and work by these principles every day.

Perfection has never been the name of the game. We all make mistakes, and Ben and I have certainly experienced a few failures. But I wanted things to be better, and I made a decision to try. Now, we will follow through on that with a culture that values integrity. Building a business around this has greatly contributed to our ability to attract employees, customers, and investors — and every day, it gets us one step closer to making a difference.

Sonny Tai is CEO of Aegis AI, a Marine Corps veteran, and a social entrepreneur.

Facebook7Tweet2Pin1EmailShares10
wpDiscuz
0
0
Would love your thoughts, please comment.x
()
x
| Reply
Share this ArticleLike this article? Email it to a friend!
Email sent!