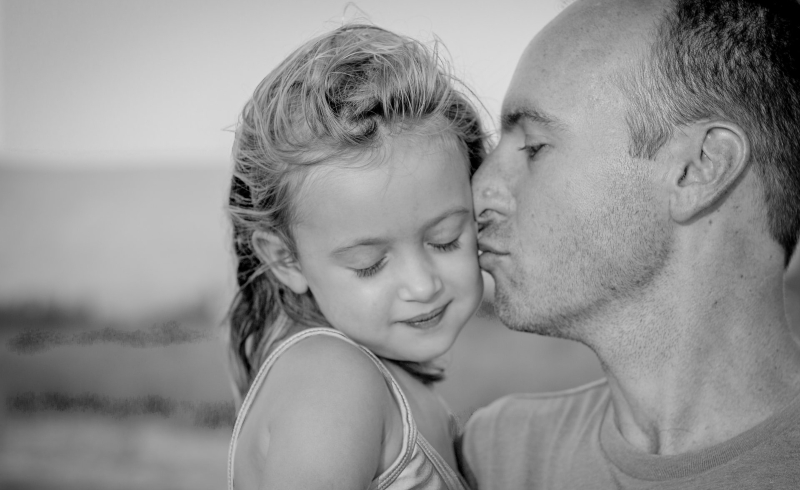 I think almost everyone has father issues. I’m no exception.

The relationship between daughters and fathers is especially complex and multi-layered. In my case, when asked, my father likes to say sentences like:

When has my father ever said, off his own bat, that he loves me and is proud of me — and without that double negative? Because that ‘not’ is the only word I remember. It makes me question:

Whereupon he would say:

’What do you think? I don’t have another daughter, do I? You are my only daughter. Who else should I be proud of?’

My grandfather’s Christmas cards go back many years

Two years ago my grandfather, with whom I had a very special bond, died. Until his death in early 2019, he had partly taken over the father role in my life; he gave me self-confidence and trust and we had a very close relationship.

Last Christmas, his death was still too recent for me. This year, I dared to get my box of old colorful Christmas cards from the basement and looked through them. This brought back memories of my grandpa, who not only wished me a ‘Merry Christmas’ but also always left a personal note. Sentences like: ‘Stay as you are’ or ‘I love you’, poems or affirmations regarding my upcoming wedding, or expressions of his pride that I’d completed my MBA.

‘Stay as you are’ or ‘I love you’, poems or affirmations from my grandfather. But nothing from my dad.

In my mind’s eye, I saw my grandpa again, sitting on his wooden chair at the dining table, surrounded by pictures from my childhood or of my late grandma, and how, with great effort (because he didn’t write much), first prewrote his lines with a pencil on a white sheet of paper and then carefully transcribed them to the card he had bought himself.

He would also receive a handwritten card from me every year. When my mother went through his belongings after his death, she told me that a card from me would always fall into her hand from one of the books or drawers. We wrote letters to each other not only at Christmas but also on special occasions and birthdays.

But from my father? Nothing. Not a single word. How can that be?

My grandfather’s Christmas cards go back many years. There are also cards in my box from my mother, my husband, my parents-in-law, and my stepmother. But from my father? Nothing. Not a single word. How can that be?

When I told him my ‘special wish’ on the phone in November, he was taken aback at first.

And then came the excuses:

I don’t know what to write. Everything is so negative at the moment.

My wife will write you something.

You know what I’d write anyway.

I showed him that these were all excuses by giving him several examples in which he had written small notes: ’12 o’clock at the hairdresser’s’, for example, and that a Christmas card was only a few lines. What he should write, I could not tell him. The current global climate is currently depressing, that’s true, and COVID has influenced all of us. But I made clear to him, that I didn’t need a list of all the evils in the world, but simply a word about US as father and daughter or about ME as his daughter.

Then I added that I wanted to be surprised by what he would write.

I don’t have a card. Where should I get a card in the times of COVID? (he doesn’t shop online.)

By this stage, I was close to losing it. Could it really be true that it was such a challenge for this grown man to write a Christmas card?

Yes, I will do it. (But he wanted to understand my motive first.)

Then I started listing all of the positive aspects of 2020, including the birth of his grandchildren.

‘Aha! That’s good stuff for the card. I’ll tell my wife. She’ll think of something positive to write.’

Every year I will pull out these cards, read the words, and will remember.

I gritted my teeth. Then I took a deep breath and told him about the box from the basement. About the beautiful cards from my grandfather, which I had gone through and whose lines warmed my heart.

I gritted my teeth. Then I took a deep breath and told him about the box from the basement.

And the fact that my real father had not written to me for years; that there was no card from him in the box.

What remains of a human being, I asked him. Every year I will pull out these cards, read the words, and will remember.

That made him think and he said:

A few days ago, I heard from my stepmother that the card was already in the house (she’d bought the card.) He would write it, she said. After all, we don’t want to fight over a Christmas card, do we?

Now I am excited to see my card. What will my father write to me after all these years?

If he’s going to put his words on paper, I hope he’ll first write a draft on a piece of paper, like my grandfather used to do.

If he then crosses out all the ‘nots’ and negatives, it would be a start. But ultimately, I will be happy about the card, even if it only says:

Then, at least, I’ll have something to remember.