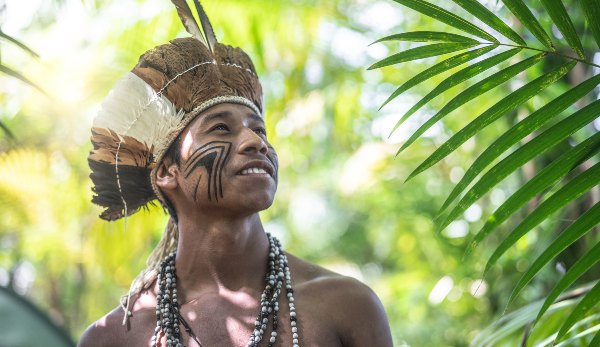 This article is part of a collaboration between the Global Landscapes Forum and Crop Trust.

When the Government of India implemented a lockdown to protect citizens from the transmission of COVID-19, the regular supply of food to rural communities was interrupted. Soon, Nawraj Gurung, a coordinator for Lok Chetna Manch, a rural sustainable development organization in the Eastern Himalayas of India, began noticing a renewed interest in traditional indigenous foods.

“Since the movement of packaged and processed vegetables stopped,” Nawraj said, “people in villages got the opportunity to revisit traditional food systems; older crops, local vegetables, and wild edibles.”

Residents of rural India turned to Indigenous foodways to weather the effects of the pandemic, where they could rely on a resilient, strong food system. Much of that strength was built on the immense diversity of the Indigenous territory.

This story is one of many that illustrates how disruption is no stranger to Indigenous societies, which have had to cope for centuries with repeated massive shocks, including natural disasters, new diseases, persecution, marginalization and conflict.

Their resilience comes from longstanding reliance on a culture of deep respect for the land, which has shaped a distinct socioecological system and nurtured the diversity of the crops and livestock they steward. Far from resisting change, Indigenous peoples are the original innovators for human nutrition, climate adaptation and survival in the face of dangerous change.

In the fallout of COVID-19, there are many reasons to look to Indigenous communities for lessons in making our food systems more sustainable, diverse and resilient.

The blessings of biodiversity

Indigenous communities have long led the way in nurturing diversity in their traditional territories. In India, a network of community seed banks protects and maintains access to more than 4,000 Indigenous rice varieties. In February, the Cherokee Nation became the first Native American tribe to deposit their heirloom seeds in the Svalbard Global Seed Vault: samples of culturally significant beans, maize and squash.

In times of crisis, Indigenous societies have coped by relying on the wide agricultural biodiversity available to them. In southeast Kenya, the Rabai Cultural Landscape (RCL) is home to a number of unique varieties of vegetables and landraces of staple crops. Vegetable species such as wild cowpea and the fibrous bush mrenda are harvested alongside unique varieties of maize, cassava and sweet potato. The four sacred Kaya forests in the RCL are also home to over 25 types of wild fruits.

“Due to the rich agrobiodiversity in RCL, the Rabai community’s food and nutrition security has not been affected by the COVID-19 pandemic,” says Chemuku Wekesa, a researcher at the Kenya Forestry Research Institute (KEFRI).

Today, Indigenous peoples in primary regions of origin and diversity of agricultural species continue to use crop diversity as the foundation for their food systems. In Cusco, Peru, the Potato Park, Parque de la Papa, was established in 2000 by six Quechua communities as a Biocultural Heritage Landscape, to recognize and better maintain the thousands of traditional potato cultivars native to the region. This effort, spearheaded by Asociación ANDES, has not only halted biodiversity loss, but increased the security of potato diversity four-fold. Today, it hosts the world’s largest collection of potato diversity conserved in situ.

How are these stories and the vast realms of knowledge underpinning them reaching the leaders, decision-makers and businesses that need them in order to build a better global food system?

Again, the answer lies in expanding upon what Indigenous nations have already created among themselves. The International Network for Indigenous Mountain Peoples (INMIP), for example, sees Indigenous communities from all over the world gather to share their experiences, traditional knowledge and innovations to tackle mutual threats.

Based in Peru, the Yachay Kuychi Pluriversity is one institution currently working to make the models of these groups grow. Translating to “Rainbow of Knowledge Systems,” the Pluriversity is an emerging international intercultural educational institution dedicated to food diversity, aiming to provide all Indigenous peoples and small-scale farmers with the research, tools and training they need to conserve crop diversity and build innovative new forms of it.

There is much to learn from the world’s Indigenous communities, especially when it comes to resilience in food systems. By fostering an environment of collaboration, there is opportunity to make progress toward mitigating the climate crisis, stemming biodiversity loss, and developing a sustainable, resilient world.