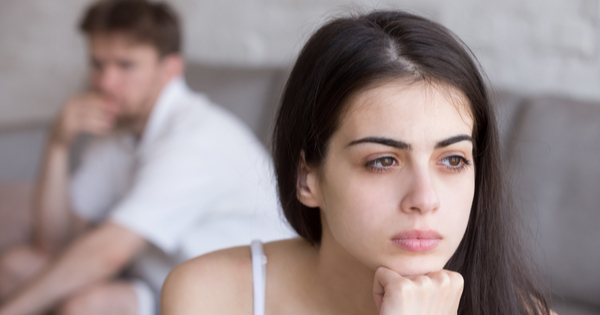 Easter Sunday, years ago. We’re on our way home from dinner with her family. My girlfriend is driving, my hand is resting on her leg.

I get a text. From an old flame.

(We’ll skip the background you would need to understand this one-line text. But it was emotional for her to send, and emotional for me to receive. We haven’t been in touch for eons.)

My girlfriend senses something, and asks.

Seems odd but she doesn’t read too much into it.

Or it could have been. A few hours later I tell her what happened. “Remember earlier today when you asked if something was wrong? I had just gotten a pretty chargy text from ____.”

No surprise what happens next. She’s relieved to have her intuition confirmed; she wants to know why I didn’t tell her earlier; and while we have no problem discussing our exes, it’s not like we sit around reminiscing about them either, so there’s that discussion to have.

The conversation is mainly about us and our interaction, though, and less about my ex or the text itself. It’s nothing major, we talk through it, and then it’s over and gone.

But why bring it up at all? I could literally have let it go and before long neither of us would even remember it happened.

A fly on the wall during our talk might just think it’s a pointless, shit-disturbing over-share.

What was so damned important to me that I had to instigate this conversation?

(It’s almost certainly not what you think.)

This is where a guy is supposed to say, “My conscience wouldn’t allow me to keep a secret from the woman I love.”

All the more so since I’m not a very good liar. I learned this about myself pretty early on, so I never developed a habit of lying. My girlfriend was surprised and disturbed precisely because it was so out of character.

Mark Twain said, “If you tell the truth, you don’t have to remember anything.”

Liars do pay a psychic price, whether it’s feeling shitty or numbing their feeling sense to the point of not feeling shitty. And yes, that’s reason enough to be honest.

But this was not my reason.

I wasn’t relieving a burden weighing heavy on my soul. There was no secret worthy of hiding or revealing. And my girlfriend certainly wasn’t still dwelling on some random moment in the car. I was actually making it a bigger deal than it was by bringing it up.

Mind you, since I did tell her, she was glad. Still, it was past the point beyond which it had faded into non-importance, never to be thought of again by either of us, had I not retrieved it.

It’s also been said, your partner always knows. Or, it’s better that he/she hear it from you than find out some other way. Basically, some variation of fear of getting caught.

Again, great incentive to be honest.

But not applicable in this situation.

(I could continue to list off a few more perfectly valid reasons that were not the reason… but you get the idea.)

So here it is. I told her because I don’t want to date someone who’s gaslighted.

When you deceive someone you’re connected to—successfully, so to speak—what happens? Well you get whatever result it was you wanted. OK, great.

Congratulations, you are now emotionally intertwined with someone who is delusional, in the concrete sense that they’re living in a false reality.

Everyone has selective perception that tends to reinforce what they already believe. Well, you just scratched this person’s lens: their ability to perceive the world as it is, is compromised. They may be happy, and they may be doing the thing you wanted them to do, but you can’t trust them. That’s right: you lied to them and as a result you can’t trust them.

That’s not what I want in the people I’m close to. I have no desire to surround myself with delusional people doing my bidding.

My lie cost me something big.

In my early days I dated a woman—let’s call her Jenn—who was fiercely dedicated to having men in her life who knew what the fuck was up.

If I asked her, in all earnestness, “Are you angry?” Or, “Did that make you jealous?” Or, “Seems like you’re down about something, are you?” She wouldn’t just say no. We would investigate what it might be that I am sensing. And not at the level of identifying some gesture or comment or facial expression that I took to have a certain meaning. Intellectualizing intuition just hobbles intuition. She would actually check in internally to see if there was something she was feeling or thinking that might correspond in some way to what I thought I sensed. Together we made sense of what I felt, so that my hunches get progressively better over time.

And if she was angry / jealous / feeling down, no matter how uncomfortable or risky it felt to confirm it, if she knew it was true she would say yes. As much as she might want to hide or redirect, what she wanted more was a man who could sense her accurately.

Do this exercise a few thousand times and you end up with someone with a highly attuned spidey sense.

When it comes to intimate relating, there is little I can think of that is more valuable than a partner who can see and feel you with exquisite precision.

Jenn was scary-perceptive herself, and she cultivated that in me. I’m grateful for both her example and her tutelage.

So let’s rewind back to the car. My girlfriend senses, accurately, that something’s up with me, and I flatly discredit her felt sense. She trusts me enough that I can.

She has a twinge of cognitive dissonance but lets it go.

At this point it’s over and done. Still, I bring it up later. My motive should be self-evident by now: I wanted her to know she was right.

I want the people in my life to know that their intuition is on the money, when it is. Just as I want them to know when it’s off or leading them astray.

And if I want that—if I want them to accurately sense me and the world—I can’t be fogging over their spidey sense.

So my transparency is self-serving. In a brief flash of juggling an out-of-the-blue emotional curveball, my initial impulse was to hide, and I acted against what I know I need to do to have the kind of relationship I want to have. So yeah, it was important to me to rectify that.

I can’t think of anything I could gain through deceit that compares to the joys of a clear-headed, highly perceptive partner.

Your homework is to think of a time when you led your partner astray. And clean it up with them. Then repeat. Start with the biggest ones first. If there are only minor ones, do those. Help restore your partner’s lens to crystal clarity.

Facebook129Tweet2PinEmail3Shares134
wpDiscuz
0
0
Would love your thoughts, please comment.x
()
x
| Reply
Share this ArticleLike this article? Email it to a friend!
Email sent!