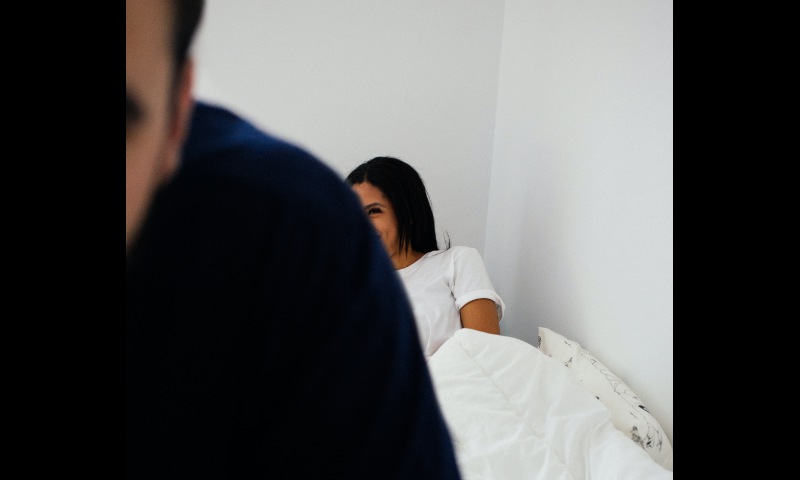 I was walking with my partner along the beach on a nice spring day. We had finished a lovely seaside lunch that included a couple of cocktails. It was just a few months into our relationship, AKA the honeymoon stage.

Suddenly I heard a loud noise, that sounded a lot like a fart. I looked at my partner. She smiled and said, “that was me.” There wasn’t an attempt to cover it up, lay the blame on something else or any embarrassment.

I felt awkward. “You just farted….and I am right next to you!” There was a tone of indignation in my voice, as if a major rule had been broken.

She shrugged and kept walking. I had stopped in a mix of anger and bemusement. Then it hit me. We are in a loving relationship. We talk about everything and anything. Share our secrets and our souls. But for some reason we couldn’t perform a natural bodily function in front of each other.

She was right. It was natural. It really was no different than if she had sneezed. I would have said bless you, and we would have continued.

Why is farting the ultimate relationship taboo?

I had been in several long term relationships and had never felt comfortable to pass wind in front of any of them. I thought it was rude to do so.

I thought a female who farted was less desirable, less attractive. And if I passed gas in front of a partner, I would be considered rude and uncouth. Of course that thinking is entirely wrong. All humans do this. It took my current partner to open my eyes up to old fashioned thinking.

From an early age, passing gas is viewed as gross. At school, kids get teased if they accidentally fart. This seems ingrained in us and is carried on as adults.

A 2016 survey by Mic found that most couples take two critical steps in their relationship at the same time. Between two and six months into the relationship, they save I love you for the first time and also “break the fart barrier.” As strange as it may seem, both acts may be of equal importance on the relationship milestone checklist. Overcoming the fart barrier can actually strengthen a bond as much as those three magic words.

The couple that farts together

A healthy relationship should hold no shame with regard to this bodily function. Dr Shannon Chavez, a relationship psychologist, believes couples who are more open may even have a better sex life. They are “probably having great sex because they are comfortable with their bodies and what they do and are more likely to enjoy different types of stimulation and play with less inhibition, fears and insecurities,” she says.

My partner just finds farting funny. Whether it is me, her, the children or our overly flatulent dog, she finds humor in it. This is a good sign — we both have a childish sense of humor, and this makes it easier to relate to each other. And couples that laugh together also have better and longer relationships according to a University of Kansas study. 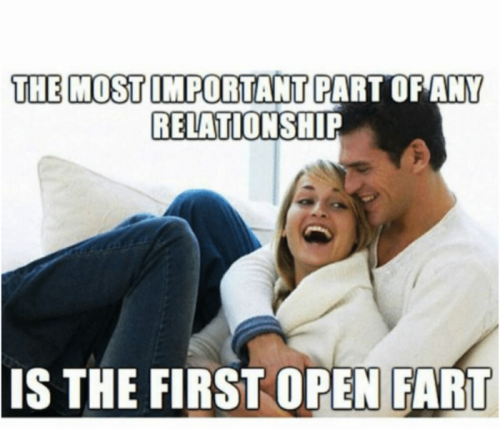 We do have an informal fart policy. Not at the table when we are eating and obviously not in front of other people. But aside from that — it’s every man, woman (and dog) for themselves.

The danger of holding it in

It is actually a good sign to pass wind. A diet full of vegetables will result in more gas over one that is high in refined sugars. On average, we pass wind five to ten times a day, and it is an indication of healthy gut bacteria.

In effect, you are censoring yourself by holding back and hiding part of yourself from your partner. It can represent a feeling of not wanting to put your partner off and have them think less of you. But you are not being your true self. Overcoming the small hurdle of a natural function allows the relationship to progress.

If partners accept the act for what it is, and there is no ‘fart shaming’, it brings the two of you closer.

It seems there is still a lot of angst with regards to this topic. Researching this article brings up a lot of articles, Reddit stories and social media posts from embarrassed people who admit to accidentally farting in front of their partner and are now suffering in embarrassment. Many people are asking for advice on this topic. Of most concern was the first suggestion below — “do farts ruin relationships?”

To me, the answer to the above is yes, they do ruin relationships if they become taboo and a source of angst. Suppose one partner feels so uncomfortable at the thought of farting and can’t be their natural selves. Then farts can inadvertently ruin a relationship.

As a side note, I also had to giggle at the common ‘how do you neutralize farts’ search query. I envisaged an elite military squad rushing into a room, commando-style and shouting, “we need to neutralize the fart immediately!”

To be honest, I never thought I could write an article based on this topic. And although it makes the child in me giggle, in actuality, it is an integral part of any relationship; one that is rarely discussed, nonetheless.

Its a perfectly natural thing to do, and once I learned to let go of my inhibitions; our relationship seemed to go to another level. I’m not suggesting that we let rip all day long or engage in the practice of dutch ovens, but if one of us has to pass wind, we do. It’s better than holding it in and causing harm.

If you want to share your life with someone, for better, for worse, for fresh and for stinky, then be yourself around them. And let rip occasionally.

In that 2016 survey I referred to earlier, 7% of respondents said they have never farted in front of their partner. We all need to overcome this and break through the barrier.

Want one more reason not to restrict yourself? Studies show that breathing in your partners farts will make you live longer!

Now there is an incentive!

Ash Jurberg is a writer from Melbourne, Australia. He specializes in humor, lifestyle, marketing and travel writing, but he can write on any topic.

In addition, he has done stand up and improv in which he was described as “that guy on stage.” He has honed his writing skills during a professional career spanning twenty years and he has studied at Morris Academy of Journalism and Second City, Chicago.

An avid traveler, Ash has been to 105 countries and is welcome back in many of them.