Get Daily Email
Join/Login CLOSE
Home / Featured Content / I Won’t Tell My 4-Year-Old Son To ‘Man Up.’ Not Now. Not Ever. 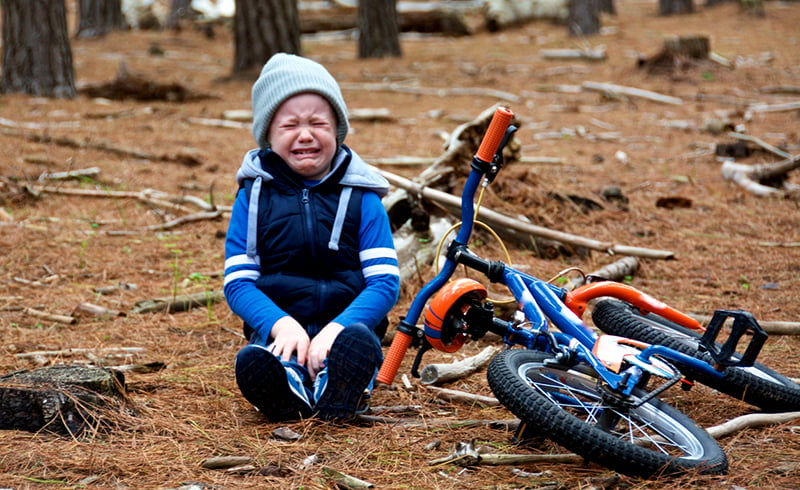 —
I won’t tell my 4-year-old son to “man up.” My male neighbor, however, seems to think differently. He not only thought it, he decided my son and I should know it.

>My son had taken a tumble off his bike and was on the sidewalk, crying. It was only a minor flesh wound, but I was holding him. I know my son. When he’s really hurt, he cries. When he’s not, he bounces back faster than a Mega Requasa Pokemon card. While he was crying, kindly neighbors were emerging, offering ice and sympathy until one man said it. “Stop crying. Man up.”

A four-year-old? Man up? Was he serious? Apparently, he was. Time flowed in slow-motion while I pieced together the words he had said . . . and then we were back to real time.

“He’ll stop crying when he’s done, and not a moment before.” Inside I wanted to pull out a flamethrower and torch him. “And he’s four. He’s not a man.” And even if he were, how was he supposed to “man up”?

◊♦◊
Would it help if he were five, at the beginning of his school career, at the tender age when some kids have begun to bully and use aggressive behavior to intimidate other kids? Maybe that’s too young. Maybe not now.

What if he were a tween, on the cusp of a massive dose of testosterone? A teenager’s testosterone levels are among the highest that will occur throughout his life. And, we all know how key testosterone is to developing and maintaining male attributes. It’s what physically makes a man a man.

At that point, when my son is going through puberty, beginning to show male attributes, is that the moment he can at least begin to “man up”?

When he “mans up,” what does that mean, exactly? He should shut down his emotions, stop crying, act impervious to pain? In this study, researchers found suppressing emotions may convey risk for earlier death. What parent would want that for their child? I don’t. Not ever.

Perhaps, you might argue, during the teen years, until he is 26, his prefrontal cortex is pruning itself. This impacts planning, working memory, organization, and judgment. After that’s over—thank God!—he’ll be a reasonable enough individual, a true Mensch, that he can certainly “man up.”

Or when he’s finally in his thirties or forties or fifties. There’s no doubt that he should be able to “man up.” Except that men from 45-65 have the highest rates of suicide over any other category of people in the United States. They commit violent crimes three times as often as women. They are less likely to report being sexually assaulted. That’s not the life I want for my son. Not ever.

◊♦◊
And that’s why I will never need my now 4-year-old son to man up. Not now. Not when he’s a tween or teen or young man or middle-aged. Not ever.

Instead, these qualities are what I hope for my son:

An internal compass to find his true north

I want him to be able to internally reference when he feels lost. This doesn’t mean he’s a lone isle in the Pacific, but it does mean he’ll know when others are engaging in wrong-doing and not participate. He’ll know when he’s on purpose and directed there.<

Knowing how to lead and how to support
No project works when there are too many leaders and too many supporters. I want my son to know the time to stand up, take risks, and take charge. Conversely, I want him to be able to discern the moments he needs to get behind someone else’s vision and support the heck out of it/them.

I want my son to feel all the feels, know what is happening to himself on an emotional scale, and be able to see it in others. This also means discerning when he’s projecting onto others, but also having the wisdom and sensitivity to read others.

Consent
That he might know what is right for himself and his body beyond what is simply available. I want his yes to be a true yes – only as good as his no. I want him to ask for consent and learn to do so with honesty – and frankly, the sexiest way possible (when appropriate).

Fearless learning. I want my son to hurl himself into the educational abyss and know he’ll come out all right. Fear of failure won’t stop him. He’ll step boldly into the unknown and keep an open mind to the possibilities that await him.

Flexibility
I want my son to learn flexibility, so while a change in the journey might knock him on his ass, he’ll know how to get up again.

Calibration
I want my son to notice the spaces he’s walking into, take stock of what’s going on, and calibrate. He won’t be the man to yell in a library (unless there’s a fire) or blast everyone with his presence (unless it’s karaoke).

I want my son to stand up for himself and his ideals and to fight for them. The same with others. It’s not enough that he has privilege. I want him to use to benefit those around him.

Those are the things I want my son to learn as he moves from boyhood to manhood. And when anyone tells him to man up, he’ll know what the means to him. Not the antiquated version that has men censor themselves to fit into a narrow man box, but a vast experience where my son will have true agency and expression.
—

How you’re raising your son is how my wife and I did. Those qualities you describe are actually how he is today at age 31.

THIS. This is an absolutely perfect example of how we need to teach our sons. Thank you for your insight.

This website uses cookies to improve your experience while you navigate through the website. Out of these, the cookies that are categorized as necessary are stored on your browser as they are essential for the working of basic functionalities of the website. We also use third-party cookies that help us analyze and understand how you use this website. These cookies will be stored in your browser only with your consent. You also have the option to opt-out of these cookies. But opting out of some of these cookies may affect your browsing experience.
Necessary Always Enabled
Necessary cookies are absolutely essential for the website to function properly. These cookies ensure basic functionalities and security features of the website, anonymously.
Others
Other uncategorized cookies are those that are being analyzed and have not been classified into a category as yet.
Advertisement
Advertisement cookies are used to provide visitors with relevant ads and marketing campaigns. These cookies track visitors across websites and collect information to provide customized ads.
Analytics
Analytical cookies are used to understand how visitors interact with the website. These cookies help provide information on metrics the number of visitors, bounce rate, traffic source, etc.
Functional
Functional cookies help to perform certain functionalities like sharing the content of the website on social media platforms, collect feedbacks, and other third-party features.
Performance
Performance cookies are used to understand and analyze the key performance indexes of the website which helps in delivering a better user experience for the visitors.
SAVE & ACCEPT
wpDiscuz
2
0
Would love your thoughts, please comment.x
()
x
| Reply
Share this ArticleLike this article? Email it to a friend!
Email sent!