Get Daily Email
Join/Login CLOSE
Home / Featured Content / Yes, Men are Sexist—Not, Not You of Course—Just Everyone Else (Call for Submissions and Response)

1970s feminist film critic Laura Mulvey coined the phrase “the male gaze,” which is “the way in which the visual arts and literature depict the world and women from a masculine point of view,” sexualizing girls and women and presenting them as objects solely for male pleasure.

The male gaze consists of three perspectives: that of the person behind the camera, the characters within the representation or film itself, and the spectator.

In the majority of history, politics, philosophy, religion, sports, music, film, entertainment, and every corner or antiquity and modernity, men have dominated.

Men come first, always, is it?

For 10,000 plus years of recorded history, men have dominated the narrative, and the male gaze has been the standard for almost all of media.

For less than a hundred years we’ve had a steady push against the patriarchy in the women’s rights and feminist movements.

And yet a man’s first response to claims that we must not sexualize young girls is: what about me?

His first response, when faced with facts about rape and sexual abuse against women is, well what about men?

Why can’t men just listen and learn—especially when almost all rape and sexual abuse is committed by men?

Talk to you Monday night?

And Join Us to discuss: 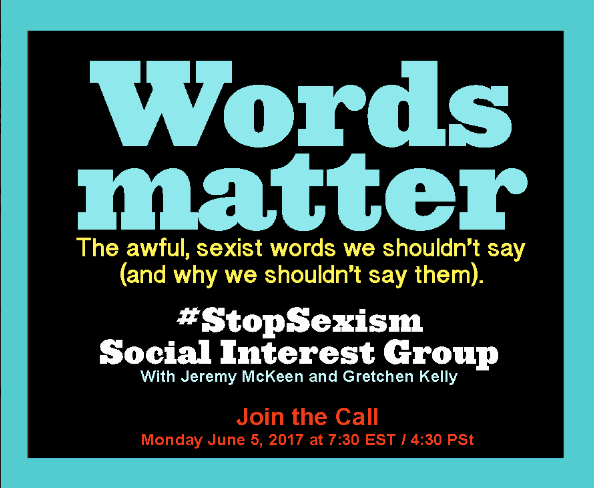 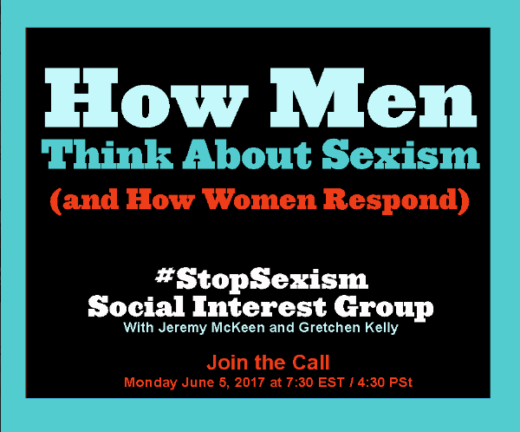 CLICK TO RSVP — Receive reminders / call in info by email
If you are not yet a member of The Good Men Project, CLICK TO JOIN

The #StopSexism Social Interest Group aims to address the issues of everyday sexism, identify contributing factors, and discuss the implications and effects of sexism. Together, we will explore ideas to combat inequality, gender bias, and society’s expectations

The group is led by The Good Men Project editor Jeremy McKeen and writer Gretchen Kelly. We will connect via the #StopSexism Social Interest Group Facebook page for dialogue and community building.

*Social Interest Groups are an exclusive benefit for Premium Gold and Platinum members only. To become a Premium Member, sign up below.

Annual Premium Memberships are $50 for Platinum and $20 for Gold. Platinum gives you an ALL-ACCESS PASS to all of our groups, classes and online events

The Good Men Project is different from most media companies.

We are a “participatory media company”—which means we don’t just have content you read and share and comment on but it means we have multiple ways you can actively be a part of the conversation. As you become a deeper part of the conversation (Which really is “The Conversation No One Else is Having), you will learn all of the ways we support our Writer’s Community—community FB groups, weekly conference calls, classes in writing, editing platform building and more.
♦◊♦

Click here to become a Premium Member of The Good Men Project Community. 1) Get  access to an exclusive “Members Only” Group on Facebook, 2) View the website with no ads 3) Get free access to classes, workshops, and exclusive events 4) Be invited to an exclusive weekly “Call with the Publisher” with other Premium Members 4) Free commenting badge, listing on our Friends page, and more.

Are you stuck on what to write? Sign up for our Writing Prompts emails, you’ll get ideas directly from our editors every Monday and Thursday.

Want to learn practical skills about how to be a better Writer, Editor or Platform Builder? Want to be a Rising Star in Media? Want to learn how to Create Social Change? We have classes in all of those areas. Classes are included free of charge with our $20 a year Gold Membership.

However you engage with The Good Men Project—you can help lead this conversation about the changing roles of men in the 21st century.

“Why can’t men just listen and learn—especially when almost all rape and sexual abuse is committed by men? I trust you have statistics to back up that claim, given the number of abusive women out there? And what has it to do with all the man who don’t rape and sexually abuse? Additionally what has that to do with art? Is your argument that someone will look at a nude painting of a woman, immediately see her and all other women as something solely for his sexual pleasure and go out on a raping spree as a result? You haven’t… Read more »

Jeremy seems to have a hard time Accepting that the culturally idealized version of womanhood is as much at odds to real life as the Feminist view of men is. Falling into the Victorian era thought trap of the Naturally purity of woman vs, innate brutishness of men…… An idea Which is foundational for the cultural biases that exacerbate sexism ……. and make it difficult for him to see that there are just as many “bad” women in this world as there are “bad” men.

I also wonder — can conscription be considered sexism?

In the majority of history, politics, philosophy, religion, sports, music, film, entertainment, and every corner or antiquity and modernity, men have dominated. And yet, when we talk about sexism, patriarchy, rape culture, misogyny, and gender bias, the first responders are always men who dismiss any injustices against women in lieu of injustices against men. You are nearly answering your own question. First you blanketly say men have dominance but when men show that they are not a monolith you accuse us of getting defensive. Why can’t men just listen and learn—especially when almost all rape and sexual abuse is committed… Read more »

It’s meant to spur conversation and call out men and women who really are sexist.

Which is a valid and noble goal. But to that end I am asking why in the face of seeing how ineffective and counter productive such narratives and generalizations are you continue to push them. It’s meant to spur conversation and call out men and women who really are sexist. And women? I appreciate you adding that in comments like this but for the most part we only ever hear about sexist men. Sure I know this site is supposed to be about men but even with that purpose I would expect there to be at least some acknowledgement of… Read more »

“It’s meant to spur conversation and call out men and women who really are sexist.”

So then be specific, don’t generalise.

This shit gets tiring when no other group may be generalised in this way by the left (let’s start blaming all black people or all Muslims for the answers of a few – oh wait, that’s problematic, but fine to do the same to men).

Women and Girls Experience Sexual Violence at High Rates Graphic illustrating the statistic that 1 in every 6 American women has been the victim of an attempted or completed rape in her lifetime (14.8% completed, 2.8% attempted). Millions of women in the United States have experienced rape. As of 1998, an estimated 17.7 million American women had been victims of attempted or completed rape.5 Young women are especially at risk. 82% of all juvenile victims are female. 90% of adult rape victims are female.6 Females ages 16-19 are 4 times more likely than the general population to be victims of… Read more »

Except that men in general report Rape/sexual assault much less often percentage wise than women do….. mostly due to the very stigma you reinforced in your article.

How many women’s issues websites spend this much time on men’s issues, Jeremy?

“Why can’t men just listen and learn—especially when almost all rape and sexual abuse is committed by men?” This is scary…. as it has been well documented that it is a lie…. yet repeated again here for political gain. While removing womens responsibility for Rape/sexual assault on boys and men. Why can’t women’s advocates deal with the fact women are human just like men are …. and do good and evil in near equal measures. The victim mentality displayed in this article is a huge part of the problem. Very sad, very ineffective prospective, that will as it has in… Read more »

Usually because the bulk of articles discussing issues affecting women will either:

– blame only male perps
– blame men collectively for not helping

Even if they don’t do these things, they will be part of a cultural context of hundreds of thousands of articles saying the same thing – hey, violence against women is bad.

We know. That topic is being covered.

The topic that is being neglected is men’s suffering – from the same problems.