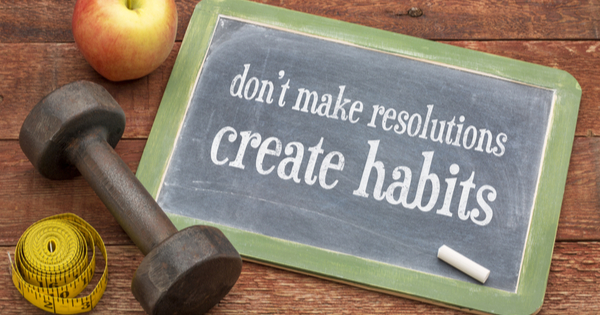 Yesterday may have sucked, but screw that, today’s here! With all the bells and whistles. Oh, you’re gonna do so much.

First, you’ll get your workouts back. Then, you’ll improve how you work. You’ll see more, live more, get more done. And, of course, you’ll finally start writing.

What you need are rational habits. Patterns that make sense.

When it comes to your health, brushing your teeth is a rational habit. That one’s obvious enough, so we do it. Sleeping 7–8 hours a night? A much tougher sell already. But it’s just as rational. So are getting fresh air, not overeating, and a light workout routine. The problem is, often, we only end up with these by accident. If ever. But what if you were intentional about them?

If you want to be an artist, waking up early is a rational habit. Write before work, and you’ll be under pressure. You’ll also be satisfied all day. Write after work, and the urgency is gone. The couch looks tempting. You’re tired. And drained from fretting about that hour all day. So you’re more likely to fail.

For every goal you can think of, rational habits exist. They either support it directly or make it more likely you’ll follow through on the actions that do.

Painters must paint. Entrepreneurs must open shop. Most of us function better in the mornings. Most of us feel tired after work. That’s not to say there can’t be the usual exception to the rule, but, in most cases, the same rational habits will make sense for the people chasing the same goals.

Rational habits sidestep motivation because they don’t depend on your mood. They minimize the impact of external circumstances on your ability to follow through. And their fallback versions are still more satisfying than even the best-failed attempt. Rational habits bank on how your brain works.

Override your autopilot? That won’t last. Good luck changing 200,000 years of human nature. Just point it in the right direction. Ask if it’s an autopilot you can trust. That’s a control function, not a new system you build from scratch.

Our minds are pattern-seeking machines. Always have been, always will. Where there’s a loop, they’ll latch onto it, hold it tight, and try to never let go. Your job is to hang out around the right loops. Let your brain do the latching.

They say you’re the average of the five people around you. That’s character. But your behavior, that’s the average of your five strongest habits. Your most enduring patterns? Like it or not, they dictate your actions and, thus, results.

Science suggests 40% of our daily activities are habitual. Maybe it’s more. As long as the actions moving you towards your goals are included, you’re set. But there’s a high chance they’re not — and ‘occasionally’ won’t do the job.

Usually, what we want isn’t unreasonable. We know we can do it. It just takes longer than we think. We need grit, patience, and flexibility along the way. But, for some reason, the bigger, bolder, and more unlikely our goals become, the more we believe we’ll achieve them with a massive, one-time push.

I think the opposite is true. The more irrational your goal, the more rational habits you need to accomplish it. Only sane compounding patterns can sustain you long enough. Because you’ll need even more grit, patience, and flexibility.

You need rational habits for an irrationally great life. It’s not intuitive, I know.

But if you want to write a bestselling novel, starting with a daily tweet makes sense. Announcing your commitment, betting on it, and creating a vision board, however, do not. They might help you write the tweet and that’s fine. But none of it will get you there. One is the reality of being a published writer — it takes years of practicing the craft — the other just a story that covers it.

So you might as well start with tweets. But start writing. Forget ‘big goal, big motivation.’ Go for ‘big goal, small action.’ Hang out with the right habits. Take it slow. Experiment. Make it tiny. Make sure you succeed. Stay rational.

Where is motivation in all this? You’re right, it’s not there. And that’s why it’s hard. Because where’s the excuse? After all, now you can’t blame an elusive concept when you fail. It’s your fault. Because you broke the commitment. Because you skipped the small action. That sucks to suck up. But it’s true.

Motivation isn’t something we can properly maintain. Rational habits are. They’re rooted in action, not inspiration.

If this all sounds sad at first, give it some time. I think it’s empowering. Lose a dependence, gain actual agency. Better to face hard truths early in the day than a big, mystic failure at the end. That’s a rational habit too.

I hope my brain will latch on. But if not, I’ll just do it again until it sticks.