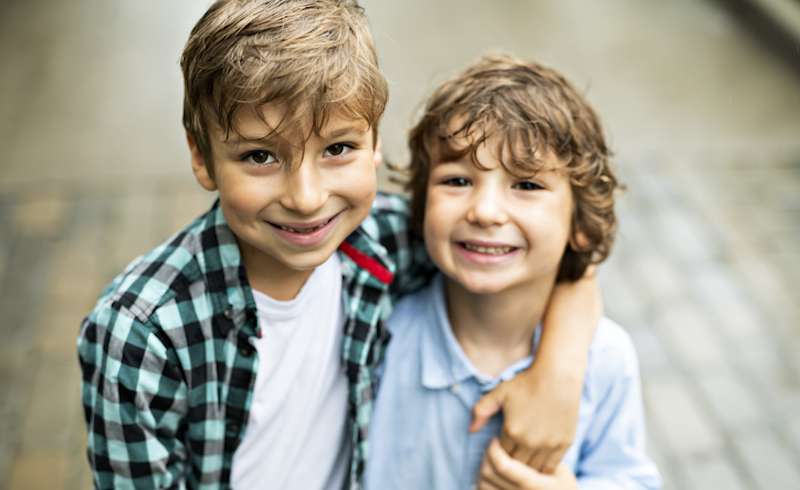 Joanna Schroeder loves being a mom of boys, but admits that there are a few things about them that have surprised her.

1. No matter how gender-neutral you may try to be with the toys you give them, you really have no control over how gendered they are in their toy selection. When my sister and I handed each of our kids—who were both 18 months old at the time—baby dolls for the first time while shopping at Costco, my niece immediately cradled her dolly while my son looked at his, turned it upside down and then chucked it into the back of the shopping cart.

2. He will not necessarily fall into the “little heartbreaker” vs “girls are yucky” binary. He may just like girls as friends. Teasing him about his girl pals being his girlfriends puts shame on what is actually a really healthy source of friendship for a kid. Some of my oldest son’s best play experiences are with girls, it seems like he gets to let his guard down and relax in ways he doesn’t with boys.

3. Star Wars, even in its hokey 80s glory, is magically timeless.

4. Potty talk is an ever-evolving art. I don’t let them use it too much, because it gets them in trouble in school, but if I hear them laughing over “walking weenis wookie poopy farty pants” in their room with their friends, I try to let them be.

5. Stinky feet start way earlier than you would expect.

6. No matter how much he plays the “tough guy” role, he has very real fears, sensitivities and inner emotional struggles. And while he may say he’s fine in times of struggle, he still suffers and needs a lot of nurturing.

7. Some boys can get dirtier in one short afternoon than you could ever imagine possible. The ring around the bathtub can be terrifying!

8. Being obsessed with weapons and having a stockpile of different types of guns—Nerf, Exploderz, Koosh, Lego, potato, marshmallow, whatever—does not inherently make a child violent. My boys are obsessed with weapons (see the photo they took of their arsenal to the right) but are some of the gentlest children I’ve ever met. My oldest son cried when ants ate the cocoon of a caterpillar he’d been hoping would turn into a butterfly.

9. Legos (or whatever they’re obsessing on at the moment) are the center of their universe. We have a special shelf for the things the kids are most proud of at the moment, be it the Lego Millennium Falcon they spent three months building or a special rock that is actually just a clump of concrete.

10. Even though he’s a boy, that doesn’t mean he’ll end up just like his dad. My youngest son is infuriatingly like me—in both the best and worst ways—and it always feels like the traits we share with our kids are the ones that frustrate us the most. It makes no difference that he’s a boy and looks just like his dad—he still takes after his mama. Luckily he’s got his daddy’s smile and green eyes, so he melts me even when he drives me crazy.
—
Also read Raising Boys, a Dad’s Advice for Moms
—

I had 4 girls, no boys and this list works pretty much equally well for them. Into Star Wars, we have swords, bows & arrows, nerf guns, shields… My youngest has appallingly stinky feet. For reasons I’ve never comprehended, they went through a Cinnamon Buns phase of referring to rear-ends…still don’t get that one.

“5. Stinky feet start way earlier than you would expect.”

Joanna! You live in California! What are you doing to those children? Two words for you – Bare. Feet.

”
7. Some boys can get dirtier in one short afternoon than you could ever imagine possible. The ring around the bathtub can be terrifying!”

Bathtub? My mom used to hose us down in the backyard because the adobe mud would clog the drain if she let us get into the bath first. Again, this works in California for a good portion of the year. It was fun too.

They’re barefoot except at school. My youngest son would NOT keep shoes on and they had to tape them down at school where they had very hot playground turf he could burn his feet on! Haha.

But yes, they are SoCal kids!

Joanna, Thank you for writing this! This really made me think of my mom. She had three boys in a row. Our ages are now 23, 21, and 20, so you could imagine the rings around our bathtubs! You sound like an amazing mother and cheers to showing them Star Wars. It’s funny hearing the other end of the parent-child personality trait thing. My friends and I are at the age where we’re starting to surrender to the fact that we’re just like our parents in so many ways–I can only imagine the difficulty in working with your match in… Read more »

Thanks, Joanna. Though people who do not have sons or grandsons can write about boys, and often do so with a great deal of insight, I think there is no substitute for actually raising them, in terms of understanding what they are like. I especially liked your point #8: “Being obsessed with weapons and having a stockpile of different types of guns – Nerf, …whatever – does not inherently make a child violent.” I entirely agree with you, but you must know that there are many who disagree. And, though I don’t have boys in school (my sons are all… Read more »

Regarding gender and toys: My daughter’s favorite toys for years were sticks. She loved sticks. They were swords, wands, guns, javelins, they directed traffic, I don’t even know what else they became in her mind. She moved from sticks to Legos and waffle blocks. Around age 10, just when most girls were giving up dolls, she started playing almost exclusively with dolls. She still plays with them, but now her favorite toy is her camera.

Your comments lost a lost of credibility when you said in She Said He Said that there’s nothing wrong with looking at pornography. Sorry, but I do NOT want my sons or husband viewing women as sex objects.

Also, how are you and your husband teaching your sons to take equal responsibility for housework? Your future daughters-in-law do not want to be their maids.

Before I line up behind your banner proclaiming that ‘Wives do More Than Half The Housework and it s Unfair!’ I have a couple of questions for you: 1. Before pairing up with your current ‘spouse,’ how did you attempt to filter your dates to eliminate ‘domestic non-helpers’ and attract men who were more domestically inclined? 2. Who was considered more socially dominant and/or higher on the social hierarchy when you first started going out? You, or him? 3. Who explicitly asked who out first? You, or him? 4. Who was making more money when you first started going out?… Read more »

Who are you talking to? Hopefully not me, because I said nothing of the sort. And certainly far from it in this article.

And I won’t even start on your getting that involved in your sons’ sexuality.

5. Stinky feet start way earlier than you would expect.
Read more at https://goodmenproject.com/good-feed-blog/ten-things-ive-learned-from-raising-boys/#whEhubtk2TviMZXg.99

Are you suggesting that ‘stinky feet’ are unique to one’s expectation of raising boys? Not sure what your point is with this one.

Well, this is what I have learned. It is not a universal about all boys. But my boys have got the craziest stinky feet. I think because they trek around in dirt all day long and throw on their shoes without socks and they don’t care if their feet ever get washed or if there’s dirt under the nails.

I’m certain there are girls like this (I know one), but this list is personally about me.

Hello Joanna:
Thansk for the article. It was very positive- healthy nurturing of, as well as, accepting boys as they are.
Your kids are lucky to have you.

My nephew loved weapons too, as well as knocking things over and banging things with sticks and generally leaving a path of destruction in his wake. But I’ll never forget watching him play fighting with a friend when he was about 4. The friend got knocked down and bumped his head, and looked like he was going to cry. My nephew immediately stopped fighting, started rubbing his friend’s head and saying “it’s ok! It’s ok!”, looking very worried. I also remember my nephew at his birthday, again about 4 or 5 years old. One of the little kids couldn’t get… Read more »

My oldest son cried when ants ate the cocoon of a caterpillar he’d been hoping would turn into a butterfly.

The trick is making sure they are ALSO able to cry if the ants get stepped on — because even though they don’t have beautiful wings, they are still living creatures. Unless someone is able to respect all life, not just those living creatures for which they have a particular use, they are not really gentle, just self-serving.

I have a hot tip for parents whose kids love Nerf guns:

Only buy one type of gun – that is, only the darts or only the discs. If you get both, then you’re constantly having to replenish both, but if you get just the one type, you don’t have to buy both types of bullets.

Also, the dart ones are WAY cheaper than the disc ones. 😉

#8: My son shares the same stockpile of weapons, too…one of my BFFs was quite dismayed when he brought his collection of Nerf sponge pellet machine guns to play with her boys at their house! He is a sweetie in real life!

#2: My son has friends who are girls, too, and they all hang out on Main Street Fridays after school…he and his friends just got invited to their first bat mitzvah (which makes me smile inside that he made friends with girls in summer camp)…

3. Star Wars, even in its hokey 80s glory, is magically timeless.
Damn straight.

7. Some boys can get dirtier in one short afternoon than you could ever imagine possible. The ring around the bathtub can be terrifying!
I remember my parents made me start taking showers while I was still a young child because of this.

FacebookTweetPinEmailShares396
wpDiscuz
23
0
Would love your thoughts, please comment.x
()
x
| Reply
Share this ArticleLike this article? Email it to a friend!
Email sent!