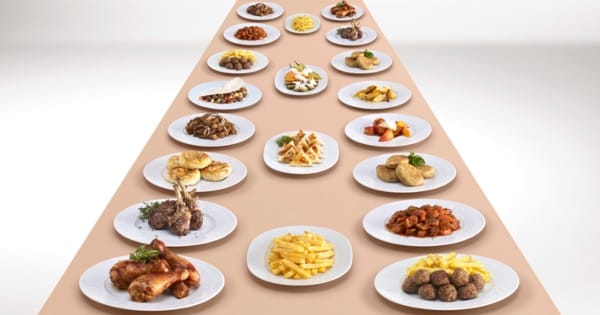 —
Two years ago I can honestly say it was the worst Thanksgiving of my life. Weeks before the holiday approached, my then girlfriend started badgering me to drive two hours with her for her large family gathering.

Having Asperger’s Syndrome (a form of high-functioning autism), I told her I wasn’t comfortable with crowds, groups of people I didn’t know and tight, crammed spaces and that I would probably just stay home with my service dog. Tye, cook a chicken and watch football alone.

To say she was angry would be a huge understatement. You see, just like every girl I’ve dated until my current girlfriend, who is also an Aspie (someone with Asperger’s), they couldn’t begin to wrap their brains around what it was like for me to be on the spectrum.

So, for the next month, she refused to take no for an answer and hounded me constantly, even pulling out the, “If you really cared for me card, you’d do it,” card. I generally tried to keep explaining what the sensory overload would do to me, but it went right over her head.

A couple of times I did play the, “If you cared for me and even attempted to understand what this will do to me mentally and physically, you would let me stay home where you know I will be OK and happy,” card.

That card never worked, so I stopped playing it.

We went at it right up to the day before Thanksgiving, when I finally broke down and, like the moron that I can sometimes be, gave in. What a stupid decision that ended up being.

The short version is that I spent the entire day with Tye, my autism service dog, in an empty room in the house with my girlfriend popping her head in the door every hour or two.not to check on me, but rather to shoot daggers at me from her eyes and to tell me how little her family thinks of me for staying to myself.

I probably should have noted before that she told me she had previously warned the family that I’m on the spectrum and that this gathering would be very difficult on me. It turns out that was, as our current President would say, “Fake News.” She told her family nothing of my condition and never actually gave a clear explanation as to why I had a service dog.

So there I sat for probably six hours, getting daggers shot at me and being made to feel as if I was a piece of crap for spending the time alone and not with her family. Not once did she feel the need to actually check on me to see how I was doing or to come sit with me for even five minutes.

When it came time to eat, she simply walked in with a plate, plopped it down in front of me and without a word, stalked off. Visibly angry at me.

Now keep in mind all my discomfort and her anger could have been avoided, had she simply listened to me in the month before the holiday, or if I had simply manned up, stood my ground and stayed home with a chicken, my service dog and some football.

The room I spent the day in had a fireplace and as everyone got their fill of turkey and all the sides, the room started to fill up with people and my panic attack kicked into critical mode.

I told my girlfriend that I was going to take Tye out for a walk, just to get out of that space and after about fifteen minutes, I knew I couldn’t go back in there to stay. So I quickly popped back in the room, pulled my girlfriend aside and told her that I simply couldn’t handle this anymore and that I needed to go wait in the car for her.

I told her she could spend a bit more time with her family, but that I would be outside in a cold car waiting for her to come join me so that we could begin the two-hour journey home.

Over the next couple of hours, I received numerous demeaning texts from her, calling me a pussy, a loser and reminding her that her family thought the exact same thing of me. She didn’t care that I was in the car freezing. She didn’t care about me at all.

Eventually, she came out and didn’t need to turn on the car’s heater because she was absolutely fuming. The next two hours were spent with me being belittled, called the same colorful names from before, plus hearing a few new ones.

Every time I tried to get my side of the story in, I was shut down and the dismantling of my self-esteem continued until I finally had enough. Now I’ve had women break up with me over the phone and via text, but I can honestly say that this is the first time that I ever broke up with someone in the car while they were driving and literally had my life in their hands.

If she cared so little about my feelings and was so unwilling to try and learn about what I was going through as an autistic adult, I saw no reason to continue the relationship. So Tye and I were dropped off at home and that was that.

Last year I did follow through on my original plans to stay home, cook something, this time it was a ham, and though Tye took it upon himself to pull it off the counter and eat it himself while I was taking a shower, the holiday was so much better for my well being than the year before.

That brings us to Thanksgiving 2019 and my beautiful, amazing, understanding and caring Aspie girlfriend who actually cares about me and shares many of the same sensory issues I do and who is not ready to be identified in these blog posts.

I can say without a doubt that it was the best birthday I’ve had in decades. Why? Because she loves me, understands me and wanted to do nice things for me. I can’t remember the last time I actually dated someone on my birthday, so this was a huge treat for me in many ways, lest of which was not spending it alone.

She also invited me to her family gathering for Thanksgiving this year, but instead of a small, crowded house overstuffed with people, this will be a much more manageable gathering of six people. That I’m pretty sure I can handle.

I’m so grateful that she understands my triggers and what overwhelms me and is taking that into consideration as we prepare for the big day.

It was an afternoon that was 180 degrees from the one just two years prior. Inside the home were only six people and immediately I was greeted by her mom and step-dad, along with a plate of bacon-wrapped dates.

The dates were the bomb and after seven or eight, it was time for the big meal. Around that time her sister and nephew made their way into the kitchen and we had nice, relaxing conversation as we stuffed our faces with turkey, dressing, sweet potatoes, mashed potatoes, green bean casserole and probably a few more things that, at the moment, I can’t remember cramming into my belly.

There was no sensory overload whatsoever and there was no reason to go and hide from the crowds in other rooms because there were no crowds. And best of all, I never once got hassled by anyone, nor was I belittled on the short five-minute ride home.

Instead, I heard how charming her family thought I was and how happy was that I had joined them for the festivities.

I can’t begin to tell you how different, and better, it is to date someone else who is an Aspie and can truly understand where I’m coming from. Our traits/quirks/idiosyncrasies aren’t exactly the same, but they’re close enough and we share enough that we figure each other out pretty easily.

With Thanksgiving behind us, it’s time to look forward to the Christmas holiday and for myself and my partner at Not Weird Just Autistic, Shannon, that means having a table at and hosting the Ugly Sweater Scavenger Hunt at Geekmas 2019, the Christmas party for nerds in the Springfield, MO area. 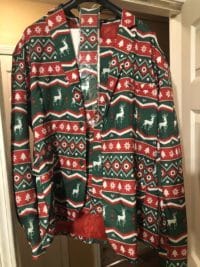 That’s where you’ll find me wearing this bad boy. It’s not an ugly sweater, but it’s hands down the ugliest Christmas suit I’ve ever seen!

Let’s face it, that’s where you’ll find a lot of us on the spectrum, as many of us have nerdy tendencies. That’s nothing to be ashamed of and why Not Weird Just Autistic is going, not only to represent the autistic crowd, but to promote autism awareness.

After that, who knows, maybe a small gathering with my girlfriend and her family on Christmas, or just hanging out alone at my house. Either way, a holiday without sensory overload is always welcome.

Facebook62TweetPin1EmailShares63
wpDiscuz
Share this ArticleLike this article? Email it to a friend!
Email sent!