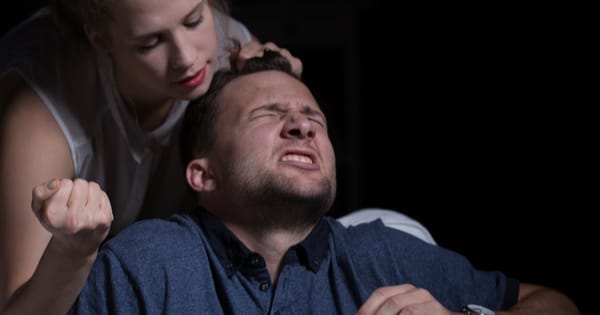 One in four men have experienced some form of physical violence from an intimate partner in their lifetime, and while the number may be lower for women, it is not by much. This is a statistic that generally gets ignored by the media when talking about domestic violence, as the focus has a high tendency to be on women and ignore male domestic abuse survivors, enforcing the stereotype that males are only ever perpetrators of domestic violence.

One other way in which this stereotype is enforced is through the media, where often male victims of domestic violence are seen as the punchline of a joke, as opposed to victims in the same way that women are. This further entrenches the idea that men who have experienced abuse are “weak”, enforcing masculinity rather than empathy.

There are also far fewer resources for men who have experienced intimate partner violence, as many shelters and programs are only aimed at helping women recover from this highly-traumatic type of abuse and portray men exclusively as the perpetrators of this type of violence. Men are far less likely to report having experienced intimate partner violence, due to social stigmas that force men to be “strong and silent”.

It isn’t all doom and gloom, however. There are trends showing that programs and shelters are moving towards a more gender-neutral treatment of this issue, and society itself seems more open to the idea of men as human beings, not gender stereotypes.

Still, there are a few barriers to seeking help that are still necessary for society to overcome, but as individuals find the strength to share their stories, press charges against the perpetrators, recover mentally and physically, or even to just break free from abusive situations, we will begin to see progress in that realm as well.

What is necessary is a multi-pronged approach–not just treating men equally in terms of the law and beneficial programs for abuse survivors, but also educating society on the need to be more accepting and open-minded about the realities of domestic abuse against men.

Why Do Men Get a Raw Deal?

Historically, domestic violence laws were first advocated for by women’s organizations like The Jane Doe Project, and these centered female victims of intimate partner violence as unheard voices. The passage of Violence Against Women Act in 1994 confirmed this, though it has since been amended in 2013 to include language prohibiting grants from being given to organizations that discriminate on the basis of sex and gender.

This does not mean we have reached gender equality for domestic abuse survivors, but there are steps being taken in the right direction. Despite the passage of this amendment, there are still far fewer services available for men than there are for women, and men are still denied access to many of these programs due to the nature of this stigma of “men as perpetrators, not victims”.

It’s become clear that completely female-centered advocacy is not helpful to the stigma that’s typically held against male victims of domestic violence. For instance, although 16 million men have experienced intimate partner violence during their lifetimes and 13 million of those reported a negative impact due to abuse, programs and laws are still largely centered around women, which further adds to the negative stigmas against male domestic violence survivors.

Think about it: how often do you hear stories of men experiencing domestic violence? It’s not because it doesn’t happen–it’s just not spoken about as much, due to stereotypes that see men as “weak” for being abused by their partners, along with a whole host of other toxic ideas. Here are a few words from male survivors about how the stigma has affected them:

“It’s hard, people don’t believe you. I told one doctor my partner was beating me up and he immediately thought that I was gay. Society can’t believe that a heterosexual man can be a victim of abuse.”

“An officer said to me, ‘She must be a really big woman, and stronger than you.’ Society doesn’t believe men like me that go through things like these.” —Serving Male-Identified Survivors of Intimate Partner Violence

Barriers to Overcoming the Stigma

Because of the historically women-centered advocacy for domestic violence victims, it’s more important than ever to make sure that men get the support they need in breaking off contact from abusers and moving on with their lives in a way that satisfies them, whether that be pressing charges or just starting a new life.

Among the many barriers to help-seeking for men are: “fear of disclosure, challenge to masculinity, commitment to relationship, diminished confidence/despondency and invisibility/perception of services”, according to a literature review conducted in 2018 by Bristol Medical School.

Only one of these barriers if the perception of services available, and while that is an issue for many domestic violence victims in the US, it is only one of many problems that need to be tackled in order to end this stigma.

There is a need for a change of heart–to view men as human beings, with the ability to experience pain and suffering just as women can, and to challenge the idea of masculinity that does not allow abuse victims to come forward.

“Sometimes, the victim will refuse to tell his… story at trial or will say the original story was a lie to help the accused person,” says Nicholas Wooldridge, a domestic violence attorney in Nevada. This is related to a victim’s commitment to the relationship, and is one of the biggest barriers to overcoming the stigma is the inability to leave a controlling partner.

Along with that, there is a need for equal treatment under the eyes of the law as well. Many divorced fathers report a bias towards mothers and women in family trials, and this is another reason why many survivors may not come forward: they do not want to jeopardize their children’s futures. Not only that, but the fear of not being believed due to gender stereotypes also limits men’s abilities to disclose, whether in general or in a court of law.

There is also a need for male survivors to have more empathy for themselves and not minimize the abuse they’ve experienced, to be open and honest about their lives in order to move on from their traumatic memories. Fear of disclosure is the number one reason that domestic abuse goes unreported, and making space for men to disclose abuse is necessary to end the stereotype that men cannot be victims of domestic violence.

Outlooks for the Future

Obviously, there are a number of different approaches that need to be taken in order to tackle this issue head-on. Male survivors will not benefit from just a mere increase of empathy by society or sudden equality in the face of the courts–a multifaceted plan must include not only empathy and a gradual change in gender stereotypes, but also the passage and enforcement of bills and laws that will help to prevent this issue from being ignored in the future.

One of the most interesting findings of the previously mentioned literature review were its outlooks for the future: what needs to be done in order to serve and protect male victims of domestic abuse. This review not only focused on how current services for male victims can be improved, but also for how to create programs that will appeal to and cater to men.

They found that services “need to be inclusive, to cater to diverse client groups, to involve ongoing support and to be widely advertised” in order to be successful. Providing support for male victims of partner violence is the bare minimum that needs to happen, but if steps are taken to ensure there is more equality in these services, these victims will be a lot better off.

Not only will men benefit from inclusive services that provide ongoing support, but the visibility of these services will also aid in making the public aware that male domestic violence survivors exist and are worthy of this support. In order for men to feel safe and included in these programs, many changes will have to be made, but they can only contribute to fighting the good fight in the future.

Regardless of what gender the perpetrator of domestic abuse is, it is an incredibly traumatic experience that can have a negative impact on your mental and physical health for the rest of your life. Many survivors report developing PTSD after experiencing domestic violence, which can have severe implications for your quality of life, even after leaving an abusive partner.

The most important resource to recover after leaving an abusive partner is your mental health, and services are still not where they need to be in order to serve this part of the population. So our best advice is: if you are experiencing or suspect you may be the victim of domestic abuse, the best solution is to find a lawyer immediately to protect yourself, your family, and your assets from an abusive partner.

Thankfully, the outlook for male domestic violence survivors is changing. Many programs are now shifting their focus from exclusively women-centered to a more holistic and gender-neutral approach. There is hope for the future, as long as men keep fighting the good fight.

This content is brought to you by Arkady Bukh.

Arkady Bukh is a nationally recognized defense attorney and human rights activist based out in New York. Arkady is known to be a stellar litigator and negotiator. He is also a frequent media contributor and published author.

Facebook1.6kTweetPin1Email2Shares1.6k
wpDiscuz
0
0
Would love your thoughts, please comment.x
()
x
| Reply
Share this ArticleLike this article? Email it to a friend!
Email sent!