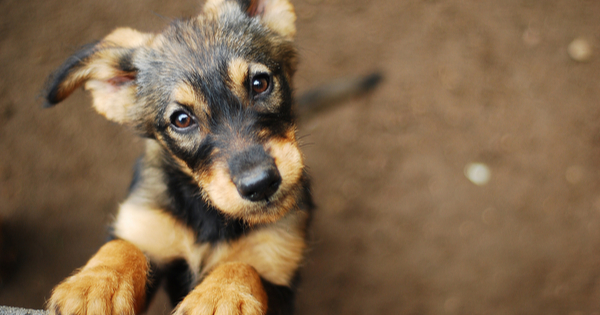 Riding their bikes along Highway 333, just north of Dover, Arkansas, my parents heard a small, pitiful yipping sound. They didn’t know what it was, but it didn’t sound good. Painful. Helpless. Those are the words that came to mind. They pulled over and waded their way into the thicket, pushing back briars and stepping over crushed beer cans. What they found is almost unbelievable. It’s even hard to type:

Tied to a tree, yipping, squealing, calling out for someone, anyone, to help.

And luckily, my parents heard his call.

They untied the dog from the tree and brought him home. It took almost a full week to get him recuperated. When they showed me the pup and told me his story, my first reaction was rage.

What sort of person could tie a poor, helpless animal to a tree and just leave him for dead? There was pain stamped in that pups eyes. I could see it, the terror he must have endured, whimpering as the night closed in and the coyotes howled in the distance.

Lucky for this pup, my parents came along before the coyotes did, or before he starved, or died from lack of water. I can think of no worse way to go. But like I said, this pup was lucky. My parents named him Eugene.

Eugene was lucky there are people like my parents out in the world. In total, they’ve rescued two dozen dogs over the last ten years. They’ve found every single stray a home. They’ve even kept two for themselves.

There’s someone out there, though, that makes my parents’ rescue look like small potatoes. She’s a high school English teacher at Western Yell County. Her name is Kendall Crawford.

Kendall founded Furry Tails Rescue in 2017, a nonprofit organization centered around saving dogs. My parents discovered her a few weeks ago when they were unable to find a local home for the latest dog they’d found while biking.

Basically, Kendall works alongside people like my parents, transporting pups up north where more people are actively looking to take in and shelter strays.I’ll never forget the phone call I received from my mom after she’d first encountered Kendall and her “reconditioned” church van. Mom was in tears, trying to explain to me the wide array of emotions she’d just felt.

When the van doors opened, there were stacks upon stacks of dogs in crates, all of them strays, all abandoned. At first, Mom experienced sadness. Pain. Seeing that many castaways all in one place. It hurt her. But then she realized these were the ones that had made it. The ones that were being shipped off to find a new home, and that’s when the tears of joy started pouring down her face.

None of that would be possible without people like Kendall Crawford. As I said, Furry Tails is a nonprofit organization, but money is required to haul the pups to their new homes. In fact, the day Mom and Dad dropped their dog off, Kendall’s van broke down, and it took a few hours to get it up and running again.

You can find a link Furry Tails PayPal account on their Facebook page, “Furry Tails Rescue.” She’s not doing it to make any profits. She’s not making a dime. She’s simply doing it for the love of dogs.