Get Daily Email
Join/Login CLOSE
Home / Advice & Confessions / How Do You Make Friends As An Adult? Part 3 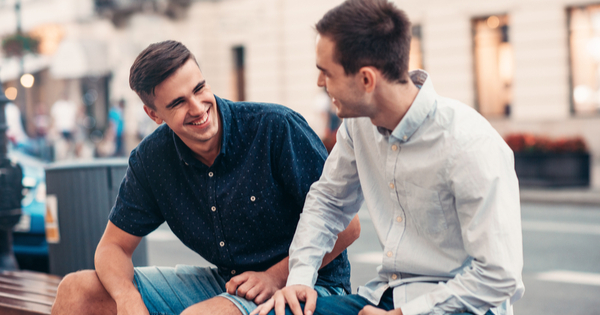 The cowboy. The loner. The Alpha. The rugged individual. Our culture’s immediate memory serves up no less than 100 years of masculine stereotypes reinforcing the idea no man should need the support or community of other men.

It manifests in the way we raise our boys, teach them, and train them to be around other boys. This sets the foundation for how they grow up, and the men they become. It is why today a third of American men feel lonely.

So what the h*ll are we supposed to do?

In 2009, the movie “I Love You, Man” came out. In it, Paul Rudd’s character realizes in the months leading up to his wedding he has no male friends and sets out on a series of man-dates to find a best friend. It is extremely funny and because it is so honest, painfully awkward. Though I was only 25, and a decade away from being engaged, it resonated deeply with me. It was the first movie I had ever seen that acknowledged what I myself was feeling. I didn’t have enough male friends, and I didn’t know what to do about it.

Well, that’s not true. I knew what I wanted to do. I wanted to make more male friends. But admitting it out loud, which I tried not to do, sounded desperate. In my own personal quest for competence, confidence, and self-sufficiency it was embarrassing to be in need. Certainly vulnerable.

Sociologists who study masculinity have learned it is a performed trait; something that must be constantly demonstrated and proved in order to be maintained. It requires constant, active participation witnessed by other men. And unlike femininity, the greatest threat to masculinity is the threat of losing it. Of appearing weak, incompetent or god forbid, sad. I’ve never heard a woman complain about a threat to her womanhood. Yet, our manhood seems to be always at risk.

The performance of masculinity is the very thing that makes creating meaningful friendships with other men so difficult. Friendship is an emotional experience. Men have not been socialized to be comfortable with emotional experiences. Peers, companions, acquaintances, those are what we have filled our lives with. There is not much required to form simple bonds requiring little of other people. Bonds, that more often than not, form over an activity.

Sometimes I wonder if that is why sports were invented in the first place. So men could sit next to each other and watch an activity without the awkward discomfort of mutually sustained eye contact.

Regardless of the difficulty or discomfort, there must be a way men are finding community in a time of increasing loneliness. No matter how hard I try it seems any community is formed in only one location: The website Meetup.com As we have retreated deeper into the screens in our lives, it makes sense this website, which allows anybody to create their own group for nearly any reason, has become the default ecosystem of community.

Meetup allows you to browse broadly or as specific as you like. One might be optimistic when considering how many people use the platform. That is until, one looks specifically for the term “Men’s Meetup” which results in a list of groups that are, well, very specific. To wit, some of the most popular groups in Phoenix are:

Are gay men and naked men the only people actively looking for community?

I doubt it. But the apparent popularity of these groups is no different than my own experience of trying to create a men’s meetup in New York. The vast majority of men who expressed interest also belonged to gay and nudity focused groups. I was baffled. While I wasn’t looking to exclude anybody based on their interests or sexuality, I couldn’t understand why straight, clothed, or straight clothed men weren’t interested in community. Did loneliness incapacitate them? Did they fear appearing gay by merely seeking a community of other men?

Perhaps I should create a very specific meetup entitled:

Men Who Have No Interested In Being Naked With Each Other But Who Would Enjoy Just Having Conversations With All of Their Clothes On.

The title is probably too long.

Men are awkward creatures. Growing up, we engage in a very specific style of interaction with each other. We are a generation of men trained to fear being called gay. Our school days were full of what today is classified as hate speech. Words like faggot, homo, and queer were used to tease, bully, and ultimately limit the way other boys expressed themselves. I think for many men, the desire for more meaningful male friendships is tempered by a fear of appearing unmasculine, gay, or just vulnerable.

The fear of appearing then prevents the capacity for connecting. That same fear prevents us from changing even that with which we are unhappy. We do not like our reality, but worry what climbing out of that reality would say about us.

I have been fortunate enough in my life to have formed incredibly meaningful, deep, honest relationships with some fantastic people. Most of them have been women. I have spent a significant amount of time thinking about why. The reason I always come back to is those relationships have always involved a more complex spectrum of emotions. I was not required to shut off any one part of my identity merely to maintain the connection. I could be funny, driven, open, vulnerable, and sad but most of all, me.

It is a terrible thing to look at any of the relationships in our life and realize we have kept a part of ourselves at bay merely to avoid losing the friendship. It is a debilitating way to live one’s life. Constantly shutting off the lights trains one to see in the dark, and to accept that darkness as normal.

Make no mistake. Developing friendships is work. It need not be, but it involves effort. And getting older means it is easy for our habits to define us more than we define ourselves. The baseline discomfort of loneliness appears intractable.

But past frustrations and future worries don’t change my current reality or my initial question: As a man, part of a couple, or just a person; how does anybody make friends as an adult?

I have spent hours thinking about it, thousands of words writing about it, and yet, I do not feel any closer to anything resulting in a solution. It has been illuminating though not necessarily gratifying to have taken this journey of thought and pen only to arrive back where I started without a concrete answer.

I cannot think my way to more friends. Nor can I write my way either. Life will most likely not change to make things easier. The discomfort is ever present. The opportunities forever infinite. There are no guarantees. All that is left is to try. The word on the back of the custom sneakers my fiance had made for me says it clearer than I ever could.